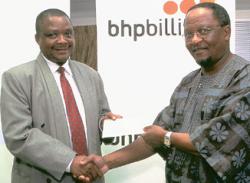 INTERNATIONAL mining and minerals company, BHP Billiton, has donated R3-million through its Development Trust towards the completion of UCT's new chemical engineering building.

Construction is well under way and everything looks set for completion around October this year, allowing for occupation at the start of the 2004 academic year.

The new building will cost around R58-million. The fund-raising campaign is still in full swing with Anglo Platinum and Anglo American having given a R15-million lead donation. The University has made a commitment for a minimum of R10-million in 2003.

BHP Billiton Development Trust has a long and positive partnership with UCT spanning over 20 years. Between 1997 and 2000 the Trust donated almost R2-million to the University. The company has also allocated R 64Â 000 to UCT's annual Mathematics Competition, a project the company has supported since 1998. The company has always supported programmes that address the imbalances as a result of past systems and which give black students greater access to educational opportunities.

Vice-Chancellor Professor Njabulo Ndebele thanked Billiton BHP for the company's continued partnership and support over the years. He said that South Africa faced many social issues, issues that no single sector could solve alone.

â€œMore serious is the skills crisis, which both business and higher education should take seriously. In this quest the role of strategic business and university partnerships could make all the difference between success and failure,â€ Ndebele concluded.

Sam Seepei, senior manager of the Trust, echoed these sentiments, saying South Africa had to grow its future human resources and produce its own skilled people.

He thanked UCT for affording BHP Billiton the opportunity be part of the chemical engineering building project. â€œ I am very happy to be here today and to witness the continued growth of the University's vision to address equity across all levels,â€ he said.

A breakdown of the department's undergraduate student corps shows that 60% are black African students and 31% are women. At postgraduate level, the figures are 26% black African and 33% women. Chemical engineering also has a high percentage of women on its staff.