School pupils had an opportunity to safely eyeball the surface of the sun, magnified 100 times, through a 10-inch diameter telescope with a strong neutral density filte, loaned by the South African Astronomical Observatory (SAAO). The telescope formed part of the Science Faculty's winning interactive exhibition, described as "the crowning glory" at the recent Sasol SciFest 2002. Astronomy postgrad student Lisa Crause is just visibe in the background. (Photo courtesy of Susan Bourne.) 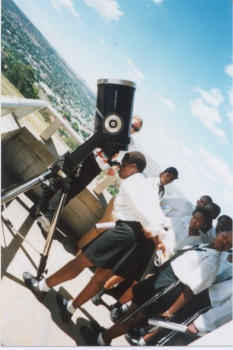 THE FACULTY of Science has notched up a huge public relations success with their exhibit at the recent Sasol SciFest 2002 in Grahamstown, described by judge Dr Billie de Klerk as "the crowning glory" of the five winning exhibitors.

"We are thrilled as this is a wonderful affirmation of all the work we have all put into making our Science Faculty stand out," said Associate Professor Julia Lee Thorp, Chair of the Faculty's Communication and Marketing Committee. "The judging criteria centred on coherence, interactiveness, attractiveness and the enthusiasm of the team."

The theme of the Science Faculty's exhibit was Seeing the World Through Science, a theme used throughout. Visitors were invited to find how science combines fundamental principles and tools to help them "see" beyond the visible world and it incorporated exhibits from physics, astronomy, microbiology, chemistry, computer science and palaeoanthropology.

The team chose ten areas of "seeing the world" through science, for example seeing beyond the visible by discovering the properties of waves and making soundwaves visible; of seeing under the sea and earth; seeing the power of computers for visualisation; and even seeing the dead. Here mirror superimposition was used to "fit" faces to the respective skulls. Visitors could peer into the face of a Neanderthal.

Lisa Crause, in the second year of her PhD in astronomy (Crause is studying a small class of extremely old stars that are now hydrogen deficient, rich in carbon and evolving very rapidly), took charge of Seeing the Very Large. She set up a 10-inch telescope (with support from the South African Astronomical Observatory) on the north-facing balcony of the Settlers Monument allowing visitors to safely view the surface of the sun, magnified 100 times.

The Faculty's Student Recruitment Officer, Iegsaan Isaacs, said part of the Faculty's success could be attributed to the involvement of a group of postgraduate students, who helped to man the exhibits.

This was echoed by Crause who said the UCT exhibits had been "highly interactive and coherent".