Literature and the scars of war 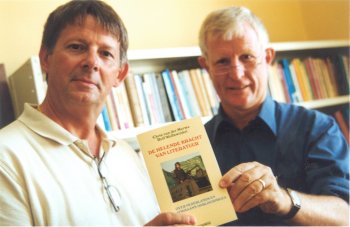 Healing by reading: Assoc. Prof. Rolf Wolfswinkel and Assoc. Prof. Chris van der Merwe co-authored the book De Helende Kracht van Literatuur, which looks at how literature can help to deal with the traumas of war.


TWO colleagues in the Department of Afrikaans and Netherlandic Studies have combined their interests in war literature to produce a bilingual book that looks at the use of literature to deal with the traumas of World War II and the South African border wars in Holland and South Africa, respectively.

In De Helende Kracht van Literatuur – Over Nederlands en Suid-Afrikaans Oorlogsproza (The healing power of literature), Associate Professors Chris van der Merwe and Rolf Wolfswinkel have compiled the papers of a small symposium dealing with the use of fictional literature to work through the stresses of war. The symposium – and book – was the result of a series of lectures the two offered at UCT.

"We were also looking at what happens to war when the memory of it becomes literature," added Wolfswinkel, who is the co-author of Anne Frank and After: Dutch Holocaust Literature in a Historical Perspective.

Following the lectures, the two organised a symposium that took place at UCT in September 1998, inviting scholars from around South Africa and Holland. At this event, 10 speakers (which included Van der Merwe and Wolfswinkel, and three Dutch scholars), presented papers on the topic. These contributions have now made it into De Helende Kracht, with the UCT duo penning the introduction. Van der Merwe also provided Afrikaans annotations for the Dutch texts, while Wolfswinkel provided Dutch annotations for the Afrikaans papers.

According to Wolfswinkel, the main question of the book is how does literature deal with the memory of war. It includes a chapter on bibliotherapy, ie the use of literature to deal with a range of traumas.

"Literature can help you to confront something which is very painful, often in a sort of indirect way," said Van der Merwe. "And so the book also deals with another interesting area that we've been groping with, that is the question of guilt – who are the heroes, who are the villains?"

The two scholars will explore the theme some more at an international, multi-disciplinary conference they are hosting at the beginning of July in collaboration with colleagues from the Department of Psychology. Titled "Narrative, Trauma and Memory", the colloquium will work its way through a number of 20th Century Southern African conflicts, including the Anglo-Boer War, the two World Wars, and the border wars.

The event will also include discussions on the gatherings of the Truth and Reconciliation Commission (TRC). People interested in attending the conference can call 650-6348 for more information.