Comparative Law with a bit of a twist 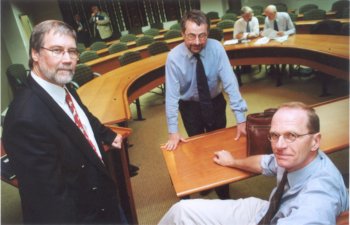 Best of both worlds: (From left) UCT's Professor Danie Visser, Professor Kenneth Reid from the University of Edinburgh and Professor Reinhard Zimmerman of the University of Regensburg and a visiting professor at UCT, are heading a unique project between Scottish and SA lawyers.


A UNIQUE comparative law study has not only brought together some of the finest minds in private law in Scotland and South Africa, but is also closing in on its ultimate objective to produce a trailblazing textbook that could hold many lessons for other areas of the world.

According to Professor Danie Visser, Head of the Department of Private Law at UCT, the project was started to take a closer look at the practice of private law in the two countries. The Scottish and South African systems are very similar, both rooted in Roman Law and influenced by English Common Law, he explained.

"Comparative law is like a lawyer's laboratory – if you want to check whether a particular rule will work in your country, one of the best ways is to see if it exists elsewhere in the world and if it works there," said Visser. "It's not always that simple, but that basically is what comparative law is about."

Visser, Professor Reinhard Zimmerman of the University of Regensburg and a visiting professor at UCT (and the major sponsor of the project), and Professor Kenneth Reid of the University of Edinburgh handpicked a selection of 50 of the best private law scholars and practitioners in Scotland and South Africa for the project. The coterie included 25 Scottish professors and lecturers, and a number of local judges and judges of appeal. First meeting in Edinburgh in November 2000, the lawyers were paired up (a South African with a Scots lawyer), with each duo allocated a specific area to focus on. The study looked specifically at two areas of private law – property and obligations.

The findings will eventually make their way into a new book, to be published by Oxford University Press in the UK and Juta and Co in South Africa, that will serve as the third volume in a trilogy that began with Southern Cross: Civil Law and Common Law in South Africa and continued with A History of Private Law in Scotland.

Not only did each team work together on a chapter for the new tome, but they were also required to teach together on a Masters course offered at UCT last year. More recently, they convened for a conference at UCT to present their provisional results and get some feedback from other participants. "It is a unique research method – a unique approach to comparative law," said Visser.

A study such as this has far-reaching relevance, especially in Europe (where several law traditions have to be melded) and southern Africa (the closer co-operation of the Southern African Development Community [SADC]), noted Visser. "What we are trying to say with this book is that Scotland and South Africa are mirrors for what Europe and southern Africa still want to do."