In the spring of 1962, on 24 September, the University of Cape Town’s (UCT) Brand van Zyl Law Library opened its doors with a clear course of action: to serve students and academics in UCT’s Faculty of Law by providing them with the resources they need to accelerate teaching and learning, and research. Sixty years have passed at full speed, and while so much has changed, the library’s commitment to service excellence has remained unfaltering.

On the eve of the 60th anniversary, the dean of UCT’s Faculty of Law, Professor Danwood Chirwa, and the executive director for UCT Libraries, Ujala Satgoor, joined librarians and academics as they gathered to pay homage and celebrate this significant milestone. The event, which included a roundtable discussion titled “The future of libraries in service of law” was held in the Kramer Law Building on middle campus on Wednesday, 21 September.

“It is indeed a proud moment for me to welcome you all here today so that we may jointly celebrate the 60th year in the life of the Brand van Zyl Law Library. The library has evolved into a dynamic, contemporary service that enables you to navigate between the traditional modes of study on site and the ability to access relevant electronic resources while on the go,” Satgoor said. “By keeping pace with significant tech developments in the field, which has resulted in a multi-format collection that caters for different academic needs, research and learning styles, the law library has demonstrated its responsiveness to a changing scholarly landscape.”

A significant part of the faculty

For Paulsen, who has been part of the law library team for the past seven years, the space is part of the fabric of the faculty and that of the university. But many things have changed over the past six decades. Operating hours have been extended to accommodate students’ demanding academic programmes, desktop computers were gradually introduced in the early 1990s, and digitising the library’s ways of working by relying on online resources to keep up with the demands of the 21st century are just some of the examples where the library has been front and centre of a transformation process.

“The law library is at the heart of the law school.”

Further, other changes include a remodelled library collection, a paradigm shift in the way academics teach students and their use of the library’s resources, the multitude of new library services on offer, and the strong ties the centre has managed to build with other law libraries in the country, on the continent and around the world.

As Badeva-Bright was browsing the law library’s celebratory page on the website in preparation for her presentation, she said she was struck by a written congratulatory statement delivered by Professor Chirwa: “Law libraries are absolutely central to law academics, researchers, students and legal professionals. Law librarians equally are central to the pursuit of justice through the provision and preservation of law information and resources.”

The statement, she added, was 100% factual, but Badeva-Bright said it lacked reference to digital inclusion. As the faculty reflects on the past 60 years, she urged academics, librarians and law students to start thinking ahead and to explore additional ways and means of including digitalisation in the library’s future ways of working to adequately prepare for the next 60 years.

“I say that as we build our information services based on our experiences over the past two years where we see that digitisation is becoming essential,” Badeva-Bright said.

In fact, digitalisation continues to play an increasingly important role in reshaping libraries in the public, private and academic sectors. And specifically since the COVID-19 pandemic, she said, law libraries have also become a lot more efficient thanks to the use of technology and collecting, digitising, categorising, retrieving and disseminating legal information.

The changing role of libraries

As the final panellist, Dr Raju’s presentation touched on services that contribute to the changing role of the law library. One of which, he said, is called Library as a Publisher (an academic library that provides publishing services) and has gained traction around the world. However, he noted that the focus globally has mainly been on publishing journals, but UCT has opted to take a different stance.

“At UCT we have taken a deliberate step of looking at it differently. And the approach we took was to focus on open book publishing. Our stance focuses on the needs of the country and this has forced us into a leadership role,” he said.

To date, he said UCT has published 23 books under open book publishing, including a constitutional law textbook written for students by students. The textbook was published in March 2020 and has already solicited 120 000 downloads from across the country and 80 other countries, including countries from the Global North. He said the model reflects the changing role of the library by seeking to address the challenge of exorbitant price tags associated with resources, and ensures that UCT content is accessible to the outside world.

“In essence, what I am suggesting here is that we as a library are meeting imperatives of the time. We talk about social justice. We talk about decolonisation. This is exactly what we are addressing in terms of this particular publication,” Raju said.

At the end of the panel discussion, Chirwa delivered the vote of thanks. He thanked guests for accepting the invitation and for celebrating the significant milestone with the faculty. 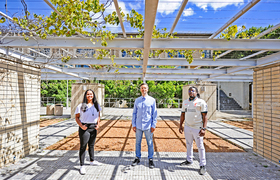