Moved and frustrated by the pain and hopelessness women expressed during the 2019 gender‑based violence (GBV) protests at the University of Cape Town (UCT), student Karabo Malahleha knew he had to do something. Asikhulumeni, a GBV education programme, was born from that moment; it primes high school learners at a key formative stage of their lives.

Asikhulumeni (a non-profit organisation) means ‘Let’s talk’ – and the programme does just that: it starts conversations on GBV with 12- to 19‑year‑olds, said the 23‑year‑old founder. He’s now a final‑year business science student, listed among the latest crop of the Mail & Guardian’s 200 Young South Africans. The goal of the organisation is to raise awareness and initiate positive change among the youth, said Malahleha.

Malahleha works with fellow UCT students and co‑directors Alex Pottinger (a third‑year BSc student, majoring in mathematics and geology) and Sizolwethu (Sizo) Buthelezi, who is studying towards a BCom in business science.

Asikhulumeni is based in Cape Town, and most of the group are student volunteers from UCT and Stellenbosch. One team facilitates the school presentations (both co‑ed and single‑sex), while another handles administration, recruitment and marketing.

Talking about and reframing GBV

Though the 2019 GBV protests were what galvanised Malahleha, it was the countless reports about the alarming increase in GBV at the height of the COVID‑19 lockdowns in 2020 that decided him. In June last year, Malahleha started Asikhulumeni – still without a firm idea of how it would work.

But since then, he’s had the privilege of watching Asikhulumeni grow; changing and adapting to the lockdown challenges of COVID‑19, and learning from the experiences and perspectives of its diverse volunteers.

Community is important to Malahleha. He grew up in Durban, raised with his sisters by his “Gogs and Mkhulu”.

“The year after matric [2017], I did a highly intentional gap‑year programme at my local church in Kloof, which helped to ground me and helped me learn more about myself and the things I enjoy. I came to UCT in 2018; I love the city, and UCT was always the institution where I wanted to study.”

The original Asikhulumeni concept was limited to boys, but has been expanded to include girls. Ideally, the volunteers choose to do their initial presentation to both the boys and the girls in a particular grade, all together. After that, they’re separated along gender lines (allowing students to choose the group they identify with), and work continues from there.

“While we emphasise the fact that GBV is a men’s problem to solve, it’s equally important to talk about and reframe the issue with the girls.”

The girls’ presentation is largely interactive, from sharing educational information to games, and ends with an anonymous question-and-answer session. The boys follow a similar programme but separate into breakaway groups, in each of which a facilitator leads a discussion that unpacks the presentation, and where learners are encouraged to share their thoughts and views on GBV – and the role they can play in changing our country.

“While we emphasise the fact that GBV is men’s problem to solve, it’s equally important to talk about and reframe the issue with the girls. All gender non‑conforming people are crucial in the conversation, and they may join whichever session they feel most comfortable in,” said Pottinger.

COVID‑19 has affected Asikhulumeni’s operations massively; it’s been difficult to access schools, timetables have changed, gatherings have been limited, and bringing in outsider facilitators has been problematic.

The first school the NPO was able to visit was on Malahleha’s turf (he was studying from home): his former high school, Thomas More College in Kloof. Here the team presented the programme to the grade nine, 10 and 11 boys and girls over three days – some 100 learners per grade.

After that, in Cape Town, a group visited Salt River Secondary School, where they presented to three grade nine classes over different days, with each class comprising an estimated 50 learners.

They also reached out to a small group of boys and girls in Elsie’s River in March this year.

Each presentation is tailored to the needs and restrictions of the particular school, and depends on what is permitted given the various lockdown levels.

Currently the presentations are delivered in English, but this is seen as flexible, said Malahleha.

No matter what language is used, he added, the key message is clear.

“We must reframe how we think about GBV; and specifically, how we engage with concepts of masculinity and power. We want to empower young learners with the tools they need to be a part of the solution to ending GBV.

The message to the girls is about reframing and empowerment.

“That is, reframing where the ‘blame’ lies in instances of GBV; how it is never a survivor’s fault, and how GBV in any form is unacceptable. We also do our best to equip them with resources they can access if they are survivors of GBV, and to encourage their confidence [in] being able to live in a world with these issues,” said Pottinger.

“They now understood they had a right to say no.”

Though COVID‑19 has prevented the programme taking root fully, the trio has been buoyed by the learners’ receptiveness.

After the presentation at Malahleha’s old school, a group of boys used breaktime to approach a group of girls to apologise for their problematic behaviour of the previous week.

“They said that through the conversations we’d had with them, they were able to recognise that what they had done was wrong, and wanted to take accountability and apologise,” said Malahleha. “Part of this apology was about the past [events], but a big part of it was also a promise about their behaviour going forward,” said Malahleha.

In their feedback forms, some of the girls at Salt River Secondary School said that the session, which included a section on consent, had changed their lives.

“They now understood they had a right to say no,” said Pottinger.

Other feedback reads: “I learned so much, and it helped me”; “Keep on with what you are doing, it can change everyone’s lives”; and “We appreciate the work you guys are doing for the youth...”

And from the boys: “Your talk was very inspiring and uplifting. I really enjoyed every second of it”; “You were awesome”; and “Your work is exceptional –just keep up the good work!”

“This feedback is invaluable to us,” said Pottinger.

As young South Africans, the trio are frustrated by how deeply entrenched the issues of GBV are in society. But they want to express a message of hope, said Pottinger.

“I know it sounds cheesy,” she noted. “Sometimes a solution to these problems seems impossible. But we must realise it is about structural changes as well as a mindset change in individuals. If we can help just a few boys and a few girls reframe how they think about gender and gender‑based violence, then the ripple effect of that change could be felt by so many.”

Buthelezi added: “Things are bad now; and with COVID‑19 especially, it seems that the discouraging statistics keep getting worse. But with that has come more awareness, and more dedicated people and teams who want positive change in this country. We believe that there is still hope for South Africa, because people are finally talking and engaging in a way that we haven’t seen before.”

And though each has different plans after graduation, they are all committed to one priority: Asikhulumeni and the conversations that change lives. 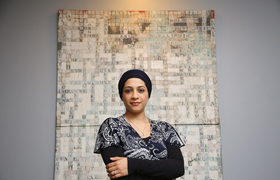