‘You can achieve anything if you put your mind to it’

At 21 years of age, Fahiem Jattiem, from the University of Cape Town’s (UCT) Information and Communication Technology Services (ICTS), was diagnosed with a rare type of leukaemia called biphenotypic acute leukaemia (BAL). The doctor estimated that he had just one year to live.

That was almost 16 years ago and Fahiem is now married with a five-year-old daughter, continues to love his work as an ICTS senior consultant and has been off all medication for a decade. His secret? While certainly a combination of things, Fahiem credits his beating the odds in large part to a positive mindset.

“I truly believe everything starts in the mind. None of it would have been possible if I didnʼt believe in myself or if I wasnʼt positive,” he said.

It’s an outlook that has served him well over the years. That, and his decision very early on to “not play the victim” and to understand that the world didn’t owe him anything; he had to work for what he wanted.

“I truly believe everything starts in the mind.”

At the time of his diagnosis, Fahiem was working at UCT as a student ad-hoc worker, which was a unique position for any student (not just those enrolled at the university), at the ICTS Helpdesk. He recalls the “sheer support” of his colleagues after he heard the news, something that affirmed his desire to stay at UCT. But first he needed to get through his initial year of chemotherapy.

After a biopsy that resulted in “excruciating pain”, the diagnosis and the prognosis that he would only live for another year, Fahiem went into a period of three-month isolation at UCT’s chief academic hospital, Groote Schuur Hospital. This was followed by many more months of isolation at home where the current “new normal” of social distancing was an early reality for him and his family.

He underwent two years of intravenous chemotherapy and once his doctor was satisfied with his bloodwork, Fahiem began oral chemotherapy and was given antibiotics that he recalls would have filled a garbage bag. Five years later, he was in remission.

While Fahiem admits to a brief period of depression following the diagnosis, during which even his love for movies and cinema fell by the wayside, his will to live and succeed trumped it.

“Being negative, youʼre just not going to yield any results,” he said.

And so Fahiem began applying the tools he had developed as a student ad-hoc worker to his cancer.

This was accompanied by a decision to do whatever it took to get better. From concoctions from neighbourhood “aunties” to copious amounts of kankerbossie (cancer bush) from his grandmother and uncle in Namaqualand, Fahiem never said no. He also got in contact with a homeopath who was instrumental in lifting his mood and re-energising him.

“Once I made that mindset change and had that way of looking at the world, things just started happening very fast.”

This was the strategy Fahiem began developing during his first three years at UCT while preparing for more permanent positions at the university. Having decided UCT was the place for him, Fahiem applied for numerous vacancies. But he soon realised he needed to improve his résumé and so he researched tips and tricks and, soon after, began securing interviews.

Fahiem then discovered that his interview skills needed honing and he went in search of advice from everyone he knew who was in a management or hiring position. With their advice in hand, he began visualising himself in the interviews and then in those jobs. But he still didn’t get the job he had applied for, that of junior helpdesk consultant. Instead, his hard work, visualisation and preparation paid off in something better: a mid-level position.

“Once I made that mindset change and had that way of looking at the world, things just started happening very fast,” he said.

A year into his new job, and with the encouragement of his colleagues, Fahiem applied for an ICTS senior consultant position, applied the same principles, and succeeded. Fast forward to 2021, and Fahiem is readying himself for his next major milestone: graduation.

When he initially joined UCT, he was studying at a private institution but was unable to complete his qualification. Once employed at UCT, Fahiem jumped at the opportunity to enrol in the Faculty of Commerce as a Recognition of Prior Learning candidate.

In 2020 he handed in his final research paper and this year he will be graduating with an honours in information systems. Again, he puts it down to doing whatever it takes and doing so with a positive mindset.

“Anything is possible. You can achieve anything if you put your mind to it,” he said. 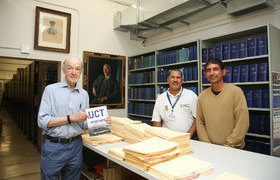