From the title (“Who’s watching the watchers?”) to the theme to where the magazine is being sold – it’s all things Fourth Industrial Revolution (4IR) and digital for this year’s popular student-produced magazine SAX Appeal.

SAX Appeal, the brainchild of the University of Cape Town’s (UCT) student charity Remember and Give (RAG), has a different home this year. The magazine has gone digital and is available through Magzter, the world’s largest digital newsstand.

For just R60, you’ll get the student perspective on the 4IR, as well as expert commentary from the likes of UCT’s Professor Carlos Lopes from The Nelson Mandela School of Public Governance, who deals with the COVID-19 pandemic and the possibilities of using this moment to accelerate change in Africa; Department of Commercial Law’s Associate Professor Debbie Collier who details 4IR technologies in the world of work and whether we’re keeping up; and social innovator Melanie Burke on the need for human connection in the 4IR.

“SAX Appeal is changing, as it should, but it’s still about sharing students’ perspectives on the most pressing issues of the day.”

Carla Bernardo (CB): What was the reason for going digital?

Khanyisile Mahlangu: We were experiencing a decline in advertising revenue from print sales; more brands are moving towards advertising on digital platforms, and we wanted to reach alumni outside the southern suburbs [of Cape Town]. Over the years we’ve had to limit the areas we sell in to ensure student safety, which means our reach was limited. Moving to digital allows us to broaden our reach. Finally, we’ve gone digital to ensure the longevity and sustainability of the magazine.

CB: What was the best part of putting this edition of SAX Appeal together? And the most challenging?

Jenna Solomon (JS): Going digital is very exciting, and we were really enthusiastic about the wide variety of media it would allow us to work with. Conceptualising the theme together as a team was also a really rewarding process. Accessing resources to produce the magazine and support the editorial team has been a huge challenge, which is why this issue was so delayed.

CB: Did the pandemic have any effect on putting the magazine together?

JS: [Yes.] It meant we had fewer resources to work with. It also delayed RAG’s ability to publish the magazine. But it also made it clear how relevant the theme of the 4IR is.

“There’s a cultural value to the magazine.”

CB: What can readers expect from this year’s publication, and why should they buy it?

JS: There’s never been a better time to talk about the Fourth Industrial Revolution, [especially since] we’ve been so reliant on technology during the lockdown. However, we’ve gone a lot deeper than just the technological impact of the 4IR; we’ve looked at how it’s changing the way we engage with [one another], and how it promotes a kind of ‘unconsciousness’, which means that we’re not as engaged with issues of race, democracy, gender – many things – as we can and should be.

Because it’s a digital edition, we’ve been able to use a lot more varied media, which intensifies the conversation and positions the magazine within a broader context, linked to other creative work on the topic.

CB: What does SAX Appeal symbolise or mean to the editorial team?

JS: For those on the team who are from Cape Town, we grew up with SAX Appeal being sold on the streets. In fact, I remember looking at the brilliant 2016 issue with Sharna Fester, our contributions manager, when we were in high school. There’s a cultural value to the magazine. SAX Appeal has generally been about having a platform to address the hard issues in a way that’s palatable (eg funny) to the traditional audience.

With digital, though, we want to build on the legacy of more recent, hard-hitting editions like the 2016 one, and move towards a broader audience, outside the traditional southern suburbs. So, SAX Appeal is changing, as it should, but it’s still about sharing student perspectives on the most pressing issues of the day.

It’s about a call for change that’s a little bright-eyed, but very relevant – and very valid. 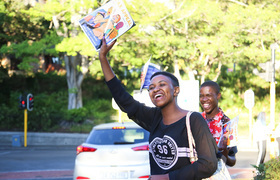