Dr Kasturi Behari-Leak, interim director of academic staff and professional development at the University of Cape Town’s (UCT) Centre for Higher Education Development (CHED), was recently nominated to the role of president-elect of the International Consortium for Educational Development (ICED).

Behari-Leak, who is also president of the Higher Education Learning and Teaching Association of Southern Africa (HELTASA) and the convenor of UCT’s New Academic Practitioners’ Programme (NAPP), will shadow the incumbent ICED president, Allan Goody, in 2020 and 2021 before taking over as president from 2021 to 2023.

The ICED’s aim is to “advance education worldwide by promoting, sustaining and increasing individual and collective knowledge and understanding of all aspects of educational development in higher education”. The consortium has 26 member networks of which HELTASA is one.

Taking up the role as president-elect ─ and later president ─ will be no simple task. However, with her expertise in teaching and learning, her view from the global south and her backstory, it is a task she is well prepared and suited for.

It was as if Behari-Leak was born to break the mould. She is the daughter of a Tamil mother and a Hindi father – a union that was not the norm in the 1960s. While many assume she speaks Hindi, as a result of apartheid schooling, she is, in fact, fluent in English and Afrikaans.

Growing up, she was often told that speaking English “right” would get her noticed ─ and it did.

“When people look at how you speak, they reward you [and] you get a sense [that] this counts,” she said. “They say, ‘You speak very well for an Indian’ and you start realising there’s something odd, something different here … innocent child no more because these markers are being placed on me.”

These markers and her awareness of them would continue to grow and so too would her need to help change the status quo.

Growing up in Merebank, which was designated an Indian-only area by the apartheid regime, Behari-Leak was troubled by having to live between two highly pollutant forces: oil refineries and an airport. Living there made her aware that she was different. This sense of othering was amplified by the clear separation between the Indian community in Merebank and the bordering coloured and black communities in Wentworth and Lamontville, respectively.

Growing up struggling in Merebank and with this sense of othering was what gave Behari-Leak her “first education”. There, in the marches and community halls, she received her education on the social world, her place in it and the inequalities into which she and other black people were born.

This continued into her student years when she became involved in many organisations and learnt to build with others. But when she re-entered university as a member of staff at UCT, Behari-Leak was again brought face to face with the othering she had had to fight all those years ago.

She became more aware of her “Indianness” with questions from colleagues such as, “Where do you come from?”, “What’s your lineage?” and “Have you gone back to your Indian town?”

“I found those such violent questions because … my reality was that I am from here,” she said.

She didn’t allow those provocations to translate into anger. Instead, she aligned her academic work with a strong social project and spiritual work that aim to help heal the wounds of a deeply divided nation.

“So that has been very important in terms of my backstory and how it informs [my work],” she said. “I reflect on it quite a bit; how it informs what I do, [what] I say, how I relate … constant growing, feeling and learning.”

This is the kind of teacher Behari-Leak aspires to be and develop. South Africa’s history and intergenerational wounding require its teachers, practitioners and higher education researchers to be healers. This is the kind of value system NAPP seeks to inculcate in its UCT recruits.

She says that when these new recruits arrive at UCT, they often struggle with identity, what it means to be an academic at the university, and they often feel like imposters.

“So NAPP at this moment has to be about building confidence from the get-go,” she said.

This means acknowledging who they are and what they bring to their academic roles in terms of background, context and language, among other things. Behari-Leak stresses that new recruits must not leave who they are at the door.

“At NAPP we are saying we want all your shapes … make those shapes work together and take that story to your students because you’re going to have to also engage with where they come from.”

It is important for teachers to do so, she said, because there is not just one student in their classes, and these students have their own backstories too. She wants teachers to think about how their teaching will speak to each student, how they’ll make their slides more representative, how they’ll bring the outside world into the classroom, and how they’ll show students their human side.

“So that’s what I think we try to do at NAPP [so] that they can replicate [it] in their own classrooms,” she said.

Behari-Leak intends to bring all this ─ her backstory, experiences, passion and work in programmes such as NAPP ─ to her position as president-elect and president of the ICED.

When she arrived at the ICED as the HELTASA president in 2017, she already began to advocate for transformation in higher education. Building on from the decolonial work she had started as a result of the Fallist movements and protest action, she made a conscious decision when addressing her ICED peers. She chose to change the narrative about Africa as a continent that needs help.

From the start, she made it clear that the continent was doing well. She informed the council meeting of 30 countries that Africa was innovating, that it was thinking, changing and shifting. Behari-Leak continued to drive this narrative over the following years.

She presented to the rest of the world an opportunity for them all, global north and south, to go on this journey to improve higher education together.

“Certain voices that have been marginalised and silenced in the past … they need the time and the space to come forward. And teachers, educators [and] education developers must be conscious of that.”

While practitioners may continue using the same frameworks and assessments, she said, calls from across the world for decolonisation and the transformation of higher education must be met with teaching that listens to and respects these voices.

“There’s a particular call … and we’ve got to rise to the challenge,” said Behari-Leak. “And I see that as my role as an academic activist ─ to rise to that challenge.” 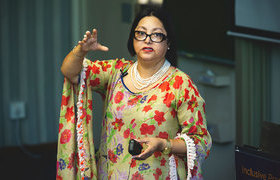 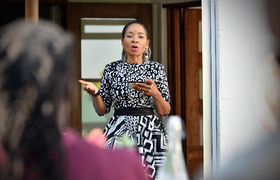