For students and staff members at the University of Cape Town (UCT), 2019 will no doubt stand out as a year where the ravages of gender-based violence (GBV) cut painfully to the core of campus life. With her tragic death still a gaping wound in the collective consciousness, Uyinene Mrwetyana’s memory is being honoured in a striking campaign against intimate partner violence (IPV) by the Faculty of Health Sciences.

Earlier this year – in an effort to raise awareness about the widespread plague of GBV affecting the UCT community, South Africa and the world – Vice-Chancellor Mamokgethi Phakeng launched the campus-wide #JustNO campaign. As an extension of this, Phakeng invited each faculty to run projects of their own, focusing on GBV in whichever way they saw fit.

Under the leadership of Professor Lillian Artz, director of the Gender, Health and Justice Research Unit (GHJRU), and Dr Chivaugn Gordon, head of Undergraduate Obstetrics and Gynaecology Education, the Faculty of Health Sciences decided to focus on IPV. This decision was based on the fact that IPV has a prevalence of close to 37% among women, who are the most common victims, and that it ultimately affects every aspect of health and well-being.

While Artz had convened the initial meeting, the campaign was conceptualised and implemented by Gordon and two fifth-year medical students, Danielle Hugo and Peace Francis.

Both Hugo and Francis have been active members of the Students’ Health and Welfare Centres Organisation (SHAWCO) since their first year and help run weekly healthcare clinics in underserved communities. The clinics are completely free to the public and give students the opportunity to practise their skills and learn how to communicate with patients.

“We often spend quite a long time talking to the patients, and one topic that surfaces quite often is intimate partner violence, which is hardly surprising given its prevalence,” said Hugo.

“Oftentimes that encounter is the first time that they are actually verbalising the fact that ‘I am being abused’ or ‘It is violent’ or ‘I am scared’ or ‘I’m worried about the safety of my children,’ ” Francis added.

Despite the fact that the burden of IPV exceeds that of some of South Africa’s most common diseases – including HIV, breast cancer, diabetes and hypertension – it doesn’t receive enough coverage within the health sciences curriculum.

“So, we came up with this idea that we need to be teaching students how to handle intimate partner violence in a way that is holistic and prepares us adequately for the massive burden that faces us,” Hugo explained.

Putting their heads together, Gordon, Hugo and Francis conceptualised a multifaceted campaign that focused on educating students and staff about the prevalence of IPV and how to deal with victims in a professional and holistic manner.

Taking a three-pronged approach, the campaign included a practical workshop for medical students, a visual demonstration of the vast burden of IPV and, finally, interactive posters that are set to go up in Groote Schuur Hospital early next year.

The practical workshop was attended by second- to fifth-year medical students who wanted to gain more knowledge about dealing with patients who might be victims of IPV.

It covered four important aspects: a mock conversation between a patient experiencing IPV and a doctor, acted out by Gordon and Hugo; an overview of the legalities that can assist victims of IPV, presented by Artz; a presentation of ‘caring for the carer’ by Advocate Bernadine Bachar, director of the Saartjie Baartman Centre for Women and Children; and a demonstration on the collection of samples as part of a rape kit, conducted by Dr Celeste de Vaal.

“It was mainly intended to address the things that fall through the cracks in the curriculum,” explained Gordon.

“It was very successful, and it seemed the students who attended it really enjoyed it.”

The next part of the campaign involved 50 student volunteers taking part in a striking visual representation of the prevalence of IPV and the fact that its effects are more far-reaching than hypertension, HIV, diabetes and breast cancer.

“So, the idea was to create this image of an advancing plague of problems, culminating in the percentage of GBV, with 18 people switching to purple,” explained Gordon.

“And then at the very end Dani had the idea that everybody must in fact change to purple, because IPV is actually everybody’s problem – whether they realise it or not.”

Posters pointing to an online resource

The final aspect of the IPV Warrior campaign, as it has become known, is set to roll out early next year and will comprise a range of interactive posters that will, among other things, have a QR code sending people to a dedicated IPV website.

This website will serve as a resource where healthcare professionals can access information about IPV as well as a comprehensive referral network. The site can be used by victims as well, where they will find relevant resources. Apart from this, the posters will also help clarify the various definitions of IPV.

“People often think it’s only physical, but there are multiple other ways in which IPV manifests,” Francis explained.

“The posters aim to highlight a few of the key manifestations, including economic abuse, stalking, harassment, verbal abuse and manipulation.”

“People often think it’s only physical, but there are multiple other ways in which IPV manifests.”

Student volunteers once again played an important role here, posing for photographs depicting these scenarios that will be used on the posters.

While the campaign is certainly aimed at educating medical students and staff about IPV and how to deal with it in the practice of healthcare, Gordon highlighted another equally important aspect: “Since Uyinene’s death, students in particular need to know that we are actually doing something. That we haven’t forgotten about this trauma.”

Gordon often sees students who are victims of sexual and intimate partner violence. 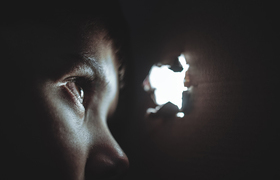