‘I am at peace with myself’

When you meet Maura Sanderoff, you’re likely to meet a woman whose warmth radiates, who loves her job, her family, her dogs and her long-distance swimming. You might have already encountered her on campus at the University of Cape Town (UCT), where she works as an architectural technologist in the Capital Planning and Projects unit in Properties and Services.

But life for Sanderoff wasn’t always this way. Over her 65 years, there were periods where she was angry, frustrated, lonely and self-conscious.

Sanderoff grew up in Seaforth in Simon’s Town. She was the youngest of four children and the only daughter to her father, an officer in the South African navy, and her Irish mother, a nurse by profession, who stayed at home to look after Sanderoff and her three brothers.

She remembers her childhood fondly: it was simple, uncomplicated. She’d spent most of her summers down at the nearby beach with friends and family. She’d climb the surrounding mountains, roller-skate at the naval base and was an active and talented member of her school’s netball and swimming teams.

Then, in Grade 10, during netball practice, Sanderoff fell, injuring her knee. While the injury was bad enough that she had to be transported to the naval sickbay with a sore, swollen knee, there wasn’t any real concern, and life went on much the same.

But then in February 1971, a few months after the fall, the pain from her knee became unbearable. Sanderoff was taken to the 2 Military Hospital where she underwent a biopsy.

And then, the diagnosis.

The sports-loving, carefree 16-year-old was diagnosed with osteosarcoma – bone cancer.

Initially, Sanderoff had no idea of the severity of the diagnosis. Not for a moment did she believe her life was at risk or that there’d be any permanent changes to her daily routines, her adventures with friends or her beloved swimming and sports.

On doctor’s orders, Sanderoff began treatment at the Karl Bremer Hospital. It was a gruelling six-week treatment. At the start of the treatment, Sanderoff was admitted as an in-patient, but thankfully was later allowed to go home and travel in for daily appointments in the hospital’s radiation unit.

The radiation chamber was a daunting place for a teenager: it was in an underground vault with low lighting and, once aligned with the radiation beams, Sanderoff was left alone for the treatment.

“[The doctor] says to me, ‘The treatment went very well. We’re very happy, but we have to take your leg off.”

During this time, Sanderoff’s health took a further knock and she began losing weight. The pain from her leg was excruciating and left her in tears every day. She was uncomfortable, angry and defiant. She also became a little rebellious, the memory of which now makes her smile.

The place on her knee where the radiation was directed would be marked off. Determined to keep swimming, she’d secretly venture off to the beach, cover her knee in cling wrap, swim and then remark the wounded area with a koki pen. Somehow, she managed to hide this from her parents and the hospital.

“It was so dangerous what I did … If I think back now, I'm lucky to be alive actually.”

But the joy Sanderoff had managed to carve out for herself with her secret sea swims could not withstand the news doctors were about to deliver to her and her parents. After her six-week treatment, Sanderoff returned to the doctor. In her mind, because of the treatment, she was getting better.

“[The doctor] says to me, ‘The treatment went very well. We’re very happy, but we have to take your leg off,” Sanderoff recalls.

Confused and angry, she stormed out of the doctor’s office, refusing to hear any more or to cooperate. Back home, she cried, screamed, “threw pots, threw pans”. But then, 24 hours later, with her parents loving words, Sanderoff agreed to the surgery.

On Friday, 13 August 1971, at 2 Military Hospital, the young Sanderoff lost her left leg. She spent many days and nights in the hospital in pain. Fortunately, her parents were always at her side and teachers would visit her in the hospital to help with schooling – a welcome distraction from the traumatic experience.

Phantom limb pain and spasm spells haunted her for many weeks, and she experienced her first fall while in hospital. Out of the hospital, Sanderoff had to acclimatise to walking with crutches. She became self-conscious about her appearance and how the pants she wore to cover the amputated leg would “flap” about. Stares from children worsened her self-esteem and the process of accepting life with a disability.

But one day, Sanderoff woke up and decided ‘enough’; she made a conscious decision to accept her new life. “The big thing is accepting and then, you can get through most things,” she says.

Acceptance was the catalyst for many of the great things that would follow. This and the continued love, support and fierce protection of her parents, brothers, family, friends – and her new Labrador, Jasmine. Sanderoff went on to pursue a successful career as an architectural technologist, got her own car, fell in love, started her own family and reconnected with her great love, swimming.

In 1973, two years after the life-altering operation, she met Charles Sanderoff. The chemistry was instant. He was accepting, funny, unconditionally supportive and even accompanied Sanderoff to her dreaded check-ups at Groote Schuur Hospital.

“He was my rock, my absolute rock,” says Sanderoff. “He took on the world on my behalf.”

Three years later, madly in love, the two married. They moved to Durban three months after the wedding, then to Pietermaritzburg. A few years later, which marked Sanderoff’s 10-year medical check-up, she was given the all-clear.

Safe in the knowledge that she was clear of cancer, Charles and Maura Sanderoff bought their first home, and in 1982 they welcomed their daughter, Kaerin-Ann, into the world. They returned to Cape Town soon after and Sanderoff gave birth to their second child, Charles Brennan.

In 1994 Sanderoff began her working life at UCT. She started in the Physical Planning Unit. Although she loved her job, she left UCT after five years. But her time away from UCT was shortlived: she returned 18 months later and has served the university ever since.

During this period of her life, and despite fears of returning to swimming in lanes and keeping up with the other swimmers, Sanderoff joined a local squad. Soon, one of her teammates invited her to join ‘extreme cold water swimming’.

Taking up extreme cold water swimming came with its own challenges. Making it through the loose beach sand was tricky and would often lead to falls, but her new teammates and friends stepped in and helped carry Sanderoff to the water. Later, after another fall that resulted in a broken prosthesis, Sanderoff needed a new one. Unfortunately, she couldn’t afford it, but again her teammates and friends stepped in. They embarked on a fundraiser, collecting enough money to buy a brand-new prosthesis and an aqua leg.

Sanderoff has since taken to extreme swimming like the proverbial fish and has completed numerous ‘pilgrimages’ to Robben Island as well as swims around Cape Point – including one to commemorate this year’s Women’s Day. Throughout, her doting husband has supported from the safety of the shore, always watching and protecting.

Being back in the water means everything to Sanderoff, who once believed that losing her leg meant the end of doing what she loves.

Now, almost half a century after receiving what was once devastating news, Sanderoff is certainly where and who she wants to be. Once self-doubting, self-conscious, angry and frustrated, Sanderoff is a woman who radiates warmth. 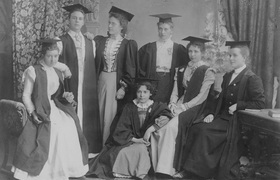 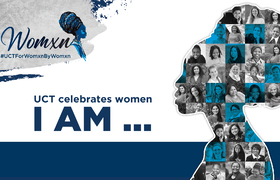