The year was 1966 and the apartheid government’s Group Areas Act whites-only law had banished more than 60 000 residents from their homes in District Six.

This eviction order signalled the official start of racial segregation in the Mother City, and the birth of the Cape Flats.

Decades later, thousands of former District Six residents are nowhere near to returning to their childhood homes, and the democratic government’s restorative justice process has come to a grinding halt.

Despite this, honours students from the University of Cape Town’s (UCT) School of Architecture, Planning and Geomatics in the Faculty of Engineering and the Built Environment (EBE) have been hard at work under the supervision of Professor of Architecture Iain Low on multiple projects over the past few years.

These explore ways of reconceptualising the area, while accommodating the ongoing restitution process and residents’ ultimate return to the neighbourhood.

This year, students participated in the Cape Town Spatial Justice Laboratory: Writing/Righting the City Otherwise, a multidisciplinary partnership between the School of Architecture, Planning and Geomatics, the District Six Museum, and the Spatial Justice in the Postcolony: Legacies of the Nomos of Apartheid Research Project.

The research project is a collaboration led by Professor Jaco Barnard-Naudé, professor of Jurisprudence in the Department of Private Law in UCT’s Faculty of Law, along with the project’s co-investigator, Julia Chryssostalis, co-director of the Westminster Law and Theory Lab at Westminster University’s Law School.

Other collaborators include Professor Andreas Philippopoulos-Mihalopoulos, director of the Westminster Law and Theory Lab, who delivered the British Academy Newton Advanced Fellowship Lecture in Spatial Justice on 15 July.

“The project draws on the tradition of public space in order to mediate the often-conflicting differences that characterise the habits of urban dwellers.”

A pop-up exhibition of past architecture honours students’ work has been on display at the District Six Museum Homecoming Centre, where critical aspects of the laboratory have been conducted over the past two weeks. The students’ designs explored ways of recreating, transforming and redeveloping the once lively and close-knit community.

According to Barnard-Naudé, who is also the co-director of the Centre for Rhetoric Studies (CRhS) at UCT, the lab aimed to assist current students in designing transformative buildings for District Six through which the community can be reimagined, while meeting the imperative of restitution.

Low said the project represents a speculation of a reimagined District Six, built on the pre-existent social and physical fabric of the district. Before they began, he explained, students had to contemplate, and answer in architectural form, a single question: “How might we live – together?”.

The assignment was first presented to students following the #FeesMustFall protests in 2016 with a view to providing a multidisciplinary approach to altering the architecture programme’s “stratified” curriculum.

The mechanics were simple, Low said. The students were required to develop new and alternative forms of housing for the area, while keeping up with the demands and trends of a modern and evolving world.

Designing and developing buildings that facilitate social cohesion in the community was a prerequisite. In addition, the project also studied new approaches to developing affordable inner-city housing.

“The project draws on the tradition of public space in order to mediate the often-conflicting differences that characterise the habits of urban dwellers,” Low said.

This year’s students were invited to present a mix of ideas on some of the best ways to rebuild and develop District Six. According to Barnard-Naudé, the laboratory used a range of interventions to enable and deliver a transfer in knowledge.

The previous honours projects on display in the exhibition proposed introducing a combination of housing options, which included one- and two-bedroom units, to suit residents’ financial commitments. They also explored introducing the community to “vertical streets”, in a bid to replicate life on the streets of District Six before the forced removals.

Other re-imaginings include making new homes available while at the same time including those claimants who have already returned to the area under the government’s restorative justice programme.

“I thought it would be a key point to continue building from and growing the existing community that has already moved back,” one student said.

“The project acts as a housing development that welcomes back claimants to the land they were forcibly removed from.”

One multipronged approach to this project was particularly interesting. Titled “Theatre of the Everyday: A home for all”, it adapted the brief from its social housing format to include recreational facilities, community businesses and student housing.

It combined the traditional with the alternatively modern and encompassed memories of the district that included the klopse and other cultural performances that featured prominently in residents’ everyday life.

“The manifesto workshop was a real interactive, cross-sharing theatre of learning. The community was part of the performance.”

Other initiatives that formed part of the laboratory included a Spatial Justice Manifesto Writing Community Engagement Workshop, facilitated by Philippopoulos-Mihalopoulos.

The workshop took place at the District Six Homecoming Centre and community members joined an open discussion and exploration of what spatial justice means to them. The exploratory activities culminated in a spatial justice manifesto, written by the workshop participants.

“The manifesto workshop was a real interactive, cross-sharing theatre of learning. The community was part of the performance, they offered their opinions and shared their ideas,” Low said.

Additional events in the laboratory included a public masterclass and laboratory launch lecture at the District Six Homecoming Centre, titled “Apartheid Remains: Nomos in the Postcolony”, during which Barnard-Naudé and Chryssostalis shared their research on the project over the past six years.

This was followed by a lunchtime roundtable titled “Spatial Justice and the Lawscape after Apartheid”, which took place in the Law faculty.

The laboratory concluded in the Pink Room of the Centrelivres Building on Tuesday, 23 July with a “pin-up” session during which students participating in the laboratory had the opportunity to discuss the posters representing their preliminary project ideas with Low, Barnard-Naudé and Chryssostalis.

Mafeje-Jordan Seminar: A Cape radical’s postcolonialism Emeritus Professor Crain Soudien examines the work of Ben Kies, one of South Africa’s most important yet lesser known political and intellectual figures. 17 May 2021 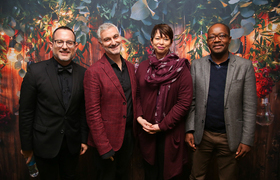