‘We have no idea what equality will cost us’

When we say we want an “equal and just” South Africa, what do we mean? And are we prepared for what it will cost us to get there?

According to panellists considering the question at a “Rethinking Equality: Cry our Beloved Unequal Country” discussion on 13 June at the University of Cape Town’s (UCT) Graduate School of Business (GSB), the country is far from ready – and may not even be on the correct path.

“We have no idea what it is going to cost us to become an equal and just society,” said Davids, challenging the audience to reflect on whether, in fact, they were prepared to make the necessary sacrifices for an equal and just South Africa.

“Because I can tell you, it is going to cost us a lot,” he warned.

The discussion was spurred on by an image from UCT master’s student Johnny Miller’s Unequal Scenes, which portrays inequality in South Africa. The now infamous image was recently on the cover of Time magazine, and shows the stark contrast between Johannesburg’s neighbouring Primrose and Makause areas.

“Those who can only exchange their skills and labour are at a disadvantage from the beginning.”

These kinds of images, said Davids, depict South Africans’ resistance to integration, and point to dishonesty in the discourse about what it will take to achieve equality.

“Up until today, we live in separate communities. However that has been constructed, there is a pervasive and perverse resistance towards integration,” he argued.

The resistance is also evident in the way we travel.

“One of the great levellers in any society is public transport. When people show a degree of integration, they travel together. South Africa remains firmly separated in its transport means.”

For Davids, this shows that while it may not be blatant dishonesty, there is certainly naivety in the national discourse.

“I am concerned that none of us really know how to get there,” he said.

For Hartman, tackling inequality requires that South Africans question the suitability of the country’s economic system.

“When I think about the dispossession of wealth, when I think about inequality, I struggle to articulate a solution without saying we have to interrogate the economic system that we are in,” she said.

While the economic system was “not designed to create inequality”, she argued that because of the rules that have been implemented, that is what it ends up doing.

“It rewards the accumulation of wealth, it rewards greed. It doesn’t reward kindness, it doesn’t reward people setting up community structures and engaging with each other. It breeds in all of us a sense of, or a psyche of scarcity.”

“The national wound has not adequately healed.”

The Bertha scholar added that in South Africa’s economic system, “people who have access to capital can accumulate and grow that capital, while those who can only exchange their skills and labour are at a disadvantage from the beginning”.

And while increasing employment levels may look like the country is edging closer to equality, it is the quality of that work that matters.

“It is great that more people have jobs; but if, with those jobs, you cannot feed your family and you cannot send your kids to a good school and you have to live in a neighbourhood where you have to worry every day whether your family is going to make it home safe, what is the goal of that job?” she asked.

Davids concluded the panellists’ input with a warning that, as a country, South Africa is ignoring its “woundedness”.

“The national wound has not adequately healed. There is not even a scarring. There is a bleeding, there is a profuse outpouring of the wound – and we are pretending that it is all okay,” he said.

This is exacerbated by those who say South Africans must “just move on now”.

David said any pursuit of equality and justice must include an open and honest conversation about oppression.

“Unless we can talk about the wounds and scars, we are going to find ourselves running more and more into deeper blood being poured out that we are stepping into, and we are going to slip and fail.” 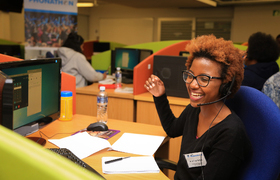 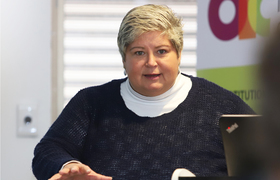