The University of Cape Town (UCT) won all three team events for a “triumphant” finish at the challenging Race2Stanford Triathlon, chalking up to their success to an effective collaboration between the cycling, swimming and athletics clubs.

The race, between the Hermanus New Harbour and Stanford Village Green on 10 November, included a 1.9 km sea swim, a 90 km cycle and a 21.1 km run.

UCT Cycling Club’s Megan Anley said they had pulled together the best students from the three disciplines to make up three teams – a men’s team, a ladies’ team and a mixed team.

The cyclists, said Anley, had done especially well over what was a very difficult course.

“The two-lap swim in the Hermanus New Harbour was in a relatively warm 16.7°C sea, but that was followed by a brutally beautiful 90-kilometre cycle through the famed Hemel-en-Aarde wine valley. There was more than 1 400 metres of climbing with a relentless headwind.

“The last leg was a tranquil but hot half-marathon around the quaint village and along the Stanford Wandelpad on the banks of the Klein River,” she said.

UCT cyclist Matt How finished only seconds behind professional triathlete Matt Trautman in the cycle leg of the race.

“The men’s elite team, comprised of How, Simon Haddon and Daniel Mesham, had a great day out. Haddon swam a phenomenal 23 minutes, coming out of the water a full two minutes ahead of the next swimmer, giving How a couple of minutes lead on Trautman on the bike leg of the triathlon.”

Although How finished just behind Trautman, Mesham ran a confident half-marathon in 1h43m in tough, sandy conditions to see the team take first place overall.

Another UCT cyclist, Matt Grobler, also had a really strong cycle, finishing in the top five in the field.

The ladies’ team delivered an impressive result in spite of their runner pulling out. While Anley took on the difficult bike leg, teammate Megan McCarley tackled both the swim and the run. They were the first ladies’ team home, and placed fifth overall.

The mixed team, comprising Grobler, Joshua Mills and Hayley Preen, had a cracker of a day, securing first position in the Mixed Team category and taking third place overall. 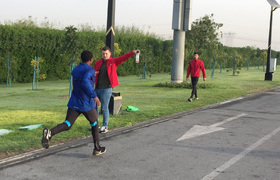