Woody plants on the march

Forests are being cleared by humans at an alarming rate. Since 2000, roughly 20% of Africa’s forests have been wiped out. This deforestation has serious consequences, among them a loss of biodiversity and the potential to remove carbon dioxide (CO₂), a greenhouse gas, from the atmosphere.

But trees and shrubs, collectively known as woody plants, appear to be fighting back on another front. Many of these species are gradually encroaching into grasslands and savannas across Africa, particularly in places like Cameroon and the Central African Republic.

We found that woody plants’ cover has increased in large swathes of the continent in the past three decades.

Taken at face value, this may seem to be good news. Woody plants mean more fuel wood for rural communities and increased food for browsing livestock like goats. It may offset the loss in carbon sequestration caused by deforestation.

But more woody plants also means less habitat for grass and other herbs that make grasslands and savannas such productive systems. And that’s a direct threat to the productivity of cattle and certain wild herbivores which rely on grass for sustenance. This is significant because in 2016, Africa produced 6.3 million tonnes of beef – more than double the meat production from sheep and goats combined. Woody plants can also take up precious water resources.

Until recently, scientists relied on historical photographs from land and aeroplanes to investigate changes in vegetation cover over decades and even centuries. This only gives information at a few locations, but these valuable studies have consistently shown that woody plants are expanding their range over parts of Africa.

We set out to expand on this research by exploring change in woody plant cover outside of forests for the entire sub-Saharan Africa region using satellite imagery going back to 1986.

We found that woody plants’ cover has increased in large swathes of the continent in the past three decades. Our findings also suggest why this may have happened: because wildfires have decreased and there are more grazing animals rather than those that just browse. This combination, along with increases in rainfall, temperature and CO₂ emissions, has driven the march of woody plants in the region. 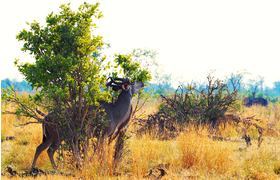