The 2018 TB Davie Memorial Lecture has focused on a renewed call to the university community to do far more to defend academic freedom.

Professor Pumla Dineo Gqola, the dean of research at the University of Fort Hare, said at the event at the University of Cape Town (UCT) that it was time for new vigour to challenge not only outside threats to academic freedom from market forces and government, but also self-censoring and threats from within the university.

“To pretend that threats to matters of academic freedom emerge exclusively from sources outside the academy requires that we look away from pressure on scholars to self-censor.”

She said academic freedom continued to matter in dynamic ways. Academics need to reflect on the difficult questions and to investigate, contest and debate. She urged the university community to defend academic freedom and to listen to the voices of a whole new generation of students.

“It is a time for rigour and not a time for safety. We know thinking is risky work. Academic freedom is about testing the limits of this risk and helping clarify for all of us, even if we don’t agree, why academic freedom continues to matter.”

Now in its 52nd year of existence, the TB Davie Memorial Lecture was established by students at UCT to commemorate the work of Professor Thomas Benjamin Davie, vice-chancellor of the university from 1948 to 1955, and a defender of the principles of academic freedom.

Organised by the Academic Freedom Committee, the annual lecture is delivered by distinguished speakers who are invited to speak on a theme related to academic and human freedom.

Gqola has held many academic and research positions across South African universities and other institutions. Her body of scholarly work, which includes over 40 journal articles, conference proceedings and book chapters, has been recognised with awards, prizes and invitations to present keynote addresses.

She is an advocate for the rights of women and has written books on racism and feminist perspectives.

In her lecture, titled “Between Academic Inheritance and the Urgency of Definitions”, she said academic freedoms challenged the difficult thinking about both the importance of critical rigour in universities and the significant effects of academic disagreement.

“Defending intellectual and academic vitality has to be about more than flexing the muscles we have already had many decades of experience in flexing.”

It was also about reflecting on “the difficult” issues such as what the Rhodes Must Fall protests highlighted about the freedoms and “unfreedoms in our university”.

Stressing that academic freedom was far from being the territory of academics only, she highlighted the importance of the role that students play.

Students at the forefront

“We will do well to remember that students have always been at the heart of academic freedom debates in this country. Try as we have to rewrite that history, it was students at UCT who started the TB Davie lecture.”

“In the aftermath ... of #RMF, and the #FeesMustFall movement it made possible nationally and beyond, universities have to deal with discomfort made possible by a new generation of students.”

“Universities have to deal with discomfort made possible by a new generation of students.”

There were pressure points in both painful and productive ways.

Critical questions needed to be asked.

“What has academic freedom got to say about contesting power, variously and internally? What is our responsibility as proponents of academic freedom when we are confronted and surrounded by internal power contestations?”

She urged universities to fight to retain, protect and defend academic freedom.

“The value and values of a university are under constant contestation. None of us would have missed the relentless invitation to turn universities into glorified training schools, vocational schools.

“We have all had to respond to and navigate expectations that we are here to train students who will respond to what the market demands, or that we have to reshape in direct response to the will of funders and investors.

“Academic freedom cannot shy away from challenges that we live with, to the urgent quest for intellectual rigour away from the single, the exceptional, away from simply the naming of buildings as a substitute for, rather than as part of a structural unmaking and abolishing, to the reflexive exercise on our own work, and the attacks on the principles of academic freedom from within our own ranks.”

A space for ideas

Speaking at the event, Vice-Chancellor Professor Mamokgethi Phakeng said it was time to reclaim UCT as a space of ideas.

“I am concerned about opening the space for ideas and being comfortable with dissent … that we are not a church.”

“My view is that we have been losing that space over the past few years. We need to reclaim the space as a space of activism, not only when we disagree with an unjust government and not just by carrying placards, because that’s not the only way of activism.

“We also need to be informed responsible citizens who hold our leaders and ourselves accountable.”

She said that as vice-chancellor, her commitment to academic freedom at UCT would be at the centre of her work.

“I am concerned about opening the space for ideas and being comfortable with dissent … that we are not a church. We should be able to sit and listen to different ways of arguing and different kinds of arguments that we don't necessarily agree with.”

She called on the UCT community to protect and exercise “this freedom in a constructive and responsible manner”.

“Our efforts together will ensure we will become stronger individuals, a better institution and a better society.” 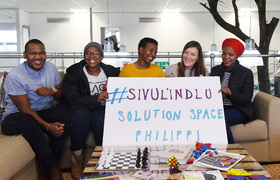 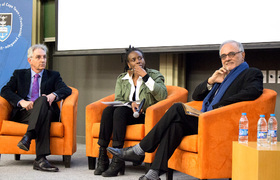