For Women's Month, the University of Cape Town (UCT) Cycling Club is running a series of events and talks to celebrate women in sport. The series began on 9 August with a coffee ride and will continue with a seminar tomorrow evening (16 August), informal discussions on 23 August, and a social media campaign to raise awareness about potential health concerns for female athletes.

The initiative, which is the first of its kind for the club, has been put together by Megan Anley and Megan McCarley.

“The aim of the series is to celebrate women in sport,” said Anley.

“We want the ladies to walk away feeling empowered as women to play sports competitively, but also wholesomely and wholeheartedly, because the spirit of sport is so much more than simply winning gold medals.

“Even just in planning this event and speaking to the guest presenters, I feel overwhelmed by all of the support. It has been very unifying not only for the ladies in the club, but for all ladies in the various sporting clubs we have spoken to.”

“The [seminar] was originally going to be specifically targeted at female student cyclists, but then we realised that we were thinking too small.”

Anley said they had invited speakers who they think encompass many different niches and who will bring awareness to some of the issues and hardships women face in sport.

“Through Sophie Cope’s story we wish to discuss ... eating disorders and the importance of having a healthy body image,” she explained.

“Through Wendy Holiday’s story we want to embrace how sport can change your life, both personally and professionally. Through Mariella Dierks’s story we want to show how living a healthy, active lifestyle and eating wholesome foods can be beneficial, as well as [finding out about] her journey to winning Ironman 70.3 Durban 2018.”

Nicole Gliddon will discuss women being strong enough to compete against men and facing “the old-fashioned mindsets” of prejudice and judgment, while Mariske Strauss will confirm that it is possible for both women and men to balance sport and academic studies, Anley added.

The programme for Women’s Month is not only geared towards cyclists, however.

“The [seminar] was originally going to be specifically targeted at female student cyclists, but then we realised that we were thinking too small,” she said.

“There are so many lessons to be learnt from women in sport, so we decided to open the event to a whole bunch of different sports clubs at UCT, namely hockey, rowing, netball, swimming and athletics. We have also invited a few local [women’s] cycling clubs.”

Female cycling membership on the rise

Female membership of the UCT Cycling Club has increased steadily, to 20 female members out of 68, and for the first time in the club's history they have a full road racing team of seven women.

There are plenty of ways for women to get involved in the cycling club.

These have been really well received and participants include women who arenʼt in the racing team but who want to get stronger and build up confidence on a bike in a neutral, safe space.

“A lot of ladies are nervous to come along on club rides because they’re under the impression that everyone in the club is really strong and competitive, and that they're going to be left behind on the rides – I know that I was!” she said.

“It took me a full year of being a part of the club before I went on a club ride. But [the spinning class] allows them to come and see what it’s all about.” 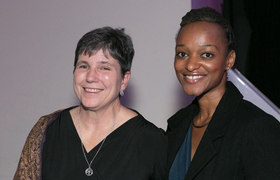