Natasha Oates, Nasiha Ally, Ryan Tripod and Zack Zornitta outclassed 10 other pitches to take top honours in the competitive event in Johannesburg at the beginning of the month.

Discovery Limited launched its annual hackathon in 2014 with the objective of highlighting the company’s reputation as an innovative organisation and simultaneously attracting the crème de la crème of graduates. The event sees people working in groups on software or hardware projects with the aim of producing a functioning product.

Gradhack invites third-year and honours information technology students from across the country to submit business cases to be developed by teams comprising two to four people. These are reviewed, and up to 30 students are hosted by Discovery in Johannesburg for four days.

The actual hackathon takes place over 48 consecutive hours, when teams work on their proposed systems with input from key Discovery managers and previous Gradhack winners.

The prize, which was also won by a team from the UCT IS department in 2017, includes guaranteed employment at Discovery for each team member following graduation.

For 2018 the candidates were invited to submit proposals in one of three categories. They could develop an idea to create “moments of delight for Discovery clients using machine learning or location-based services”, use “the Internet of Things to enhance Discovery products and services”, or employ “technology as a force for social good”.

Selecting the third category was, says Ally, one of the crucial drivers of the team’s enthusiasm and commitment to their system, which they named PayDay.

“I certainly can’t imagine being more motivated than I am when working on something like PayDay, which can make a difference to individuals and tackles one of the country’s major challenges in a broader sense,” she said.

PayDay, explained Zornitta, is a platform that addresses a sector of unemployment that the team believes has not yet benefited from the application of technology – informal work seekers who typically gather at road intersections offering their services as gardeners, domestic workers, painters, tilers, bricklayers, treefellers and the like.

Part of the problem, he said, is that the digital divide between workers with access to technology and workers without it is widening, and there are no solutions that address the requirements of a segment that most needs that technology.

“PayDay … can make a difference to individuals and tackles one of the country’s major challenges.”

“As is sometimes seen on Facebook, where people ask for and receive recommendations for these kinds of workers, the idea of PayDay is to facilitate localised communication between informal work seekers and potential employers,” Zornitta explained.

“On investigating this, we noted two primary barriers. Firstly, there’s the issue of trust. Employers are concerned about employing people they don’t know and have no way of screening. So we propose implementing a verification, review and rating system.

“The other barrier is that workers don’t have access to active communication. We propose getting around this by communicating using SMSes. Many work seekers in this environment do not have smartphones and/or cannot afford data. They communicate via SMS.”

How it’s going to work

Using a localised approach, those seeking work are added to an online database by PayDay fieldworkers who approach the workers, explain the PayDay system, discuss their skills and services, conduct verification, and ask for their telephone and identification numbers.

Qualifying workers’ information is then uploaded on the PayDay site where potential employers can review the services and skills, access comments and ratings by previous employers, and make contact with workers in their areas.

Planned future features of the system include evolving the screening process, and adding things like operational centres, payment facilitation, transport, insurance, incident recovery and premium services for both employers and workers.

The team also has several ideas about how to monetise PayDay.

More than a good idea

The Gradhack adjudication panel included top Discovery executives, but Oates said they were judged not only on the idea, but also on how it incorporated technology and how effective it might be technically. The panel also assessed the team’s skills as business strategists, and it had helped that three of their winning team had studied business science.

“From the moment we began thinking about PayDay, we approached the challenge as a business case and not just as a system,” she explained.

“This was a good start, which was advanced by the questions and ideas put forward by Discovery’s top managers during the hack. Although the core idea stayed the same, the advisors provided useful input, particularly around issues of liability.”

“We realised early in the event that one of the primary things we’d be judged on was our ability to be agile and respond quickly to queries and suggestions by advisors.”

Tripod added, “Having some of the past winners of Gradhack walking around the room, making suggestions, was also helpful. We realised early in the event that one of the primary things we’d be judged on was our ability to be agile and respond quickly to queries and suggestions by advisors.”

All the team members agree that “expect the unexpected” was something of a theme of Gradhack 2018. They got no schedule of events prior to their arrival in Johannesburg, and were also surprised by several unexpected proceedings over the four days. For example, the first morning included them being required to teach maths and science to matric students.

“Fortunately we’re all tutors at UCT, so we were prepared for that,” said Ally.

“We were also individually interviewed by the panel of judges and told that even if our team did not win, the interviews could lead to offers of employment by Discovery,” Tripod mentioned.

Two of the four said that they might take up jobs at Discovery, while the other two were hoping to be accepted for masterʼs studies, but would consider requesting a deferment.

What they are all certain of, however, is that they want to get PayDay to market. 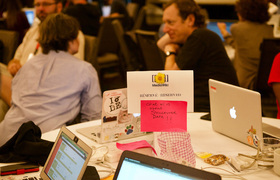 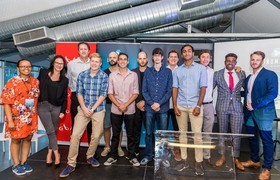 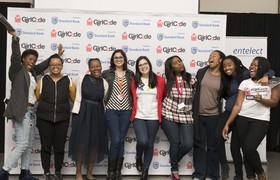