In March this year the University of Cape Town’s (UCT) recycling rate was a dismal 4%. To improve waste management on campus and in residences, UCT has commissioned environmental law specialist Richard Summers to undertake a legal waste audit.

The audit will identify measures that the university must introduce to comply with waste management legislation; ensure that it has an effective, efficient and integrated waste management plan in place; and follow sound waste management practices. The exercise will also underpin the practical implementation of the Green Campus Action Plan, says Noelene le Cordier of Properties and Services’ Grounds and Gardens unit.

In tandem, UCT’s waste contractors, Waste Control and Smart Waste, will run a pilot project on campus to inspect waste collection sites daily. Two staff members will be temporarily appointed to work on site in order to ensure that the university community collects as much recyclable waste as possible.

The audit and pilot project will support the institution’s Integrated Waste Management Plan and put financial figures to UCT’s poor record in waste and recycling.

In her May 2018 waste management and recycling report, Le Cordier noted: “UCT’s recycling performance has been consistently bad for years. At present, most of our waste is so badly cross-contaminated as to be unrecyclable.”

There is also evidence of hardware waste being dumped along corridors in buildings, and builders’ rubble in wheelie bins.

“UCT’s recycling performance has been consistently bad for years. At present, most of our waste is so badly cross-contaminated as to be unrecyclable.”

“At a very basic level, our recycling infrastructure throughout all campuses is extremely poor.”

There are multiple reasons for this under-par performance, Le Cordier said: poor understanding of the waste collection process by students and staff, lack of appropriate signage, inconsistency in the bin types used on campuses and in residences, and inadequate housekeeping, specifically the incorrect use of clear (for recyclables) and black (for wet waste) bags.

UCT’s 4% recycling percentage (excluding food waste) for March cost the university R40 000. This was not a “bizarre outlier”, said Le Cordier. The university’s average for the past two years has been 6.5%. The industry norm for recycling by institutions like UCT is between 50 and 75% of total waste.

Using March volumes as an example, UCT generated R2 650 from recycling; if its recycling volumes had been at 50%, UCT could have generated R33 097.

“Not only is our poor handling of waste expensive, it also presents the university as environmentally uncaring.”

In sight and unsightly

She is also alarmed at the amount of food waste being disposed of as mixed waste at catering residences, which further reduces the volumes of potential recyclable waste. This is despite having paid for food waste to be sent to AgriProtein’s fly farm where it is fed to fly larvae, which are reared to make high-protein animal feed in place of fishmeal products.

As the city’s landfills are struggling to cope, UCT’s civic obligations require that it reduce the volume of recyclables and food waste being needlessly dumped.

The audit and pilot project by UCT’s waste contractors will spell out what needs to be done to turn the situation around. An integrated waste management plan will include suitable clear and visible signage, consistent bin types and the correct bin bags, said Le Cordier.

“The intention behind legal compliance and the Integrated Waste Management Plan is to enable us to do the necessary to ensure that the impact is positive, so that members of the campus community see proper infrastructure in place, and correct waste separation, clear and visible signage, consistent bin types and the correct bin bags being used.

“With suitable infrastructure and processes in place, it is hoped that staff and students will actively help improve UCT’s recycling performance.”

Research and innovation
From waste to water: how biorefineries combine water treatment with value recovery 20 Mar 2018 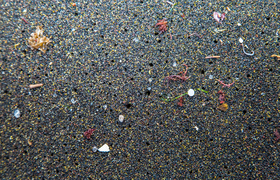 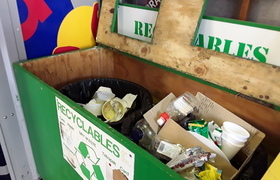 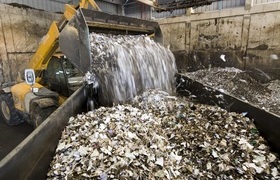