West is one of five ecological scientists from UCT and the South African Environmental Observation Network who have raised a red flag about drilling the Table Mountain and Cape Flats aquifers, specifically in the Steenbras Dam vicinity. The area is part of the Kogelberg Biosphere Reserve and home to the country’s highest density of rare and endemic indigenous flora.

The Table Mountain rock formations extend from Vanrhynsdorp to Cape Town and from Cape Town to Port Elizabeth. With reported stores of billions of cubic metres of water, the Table Mountain Group Aquifer offers a cost-effective way of augmenting the city’s dwindling water supplies in the wake of the country’s worst drought in a century.

The scientists listed their concerns in a letter to the City’s senior water and waste authorities. Most of the proposed drills sites for the Table Mountain Group Aquifer fall within the Cape Floral Region Protected Areas and are potentially in direct contravention of South Africa’s international treaties with the Convention on Wetlands (Ramsar Convention), the Convention for the Protection of World Cultural and Natural Heritage (World Heritage Sites), and UNESCO’s Man and the Biosphere Programme (Biosphere Reserves).

However, at this early stage of drilling there is still time to mitigate any environmental impact by doing site inspections to avoid particularly sensitive species. But a thorough ecological impact assessment is a priority, they say.

Speaking on the John Maytham Show on CapeTalk 567 recently, West emphasised that they weren’t opposed to drilling but wanted authorities to follow sound ecological guidelines to conserve these unique biomes.

“Given the current water crisis, we’ve heard that exemption from the regulations of the National Environmental [Management] Act has been granted under Section 30A, but see no reason that this cannot be approached in a way that achieves water supply augmentation goals while minimising the threat to biodiversity and the environment in general.”

Their letter raises two major concerns. The first is the surface impact of drilling operations, resulting in removing or disturbing the ecosystems when drill pads, pipes, power lines and roads are established. Overland flow, erosion and chemicals used during drilling could impact the wetlands, streams and other ecosystems. Drilling could also accelerate erosion, changing fire regimes and reducing resistance to alien plant invasion, affecting the long-term functioning of the catchment. This would reduce the quantity and quality of water to our dams.

In some instances, the situation is critical. The scientists note, “From a biodiversity perspective, species distributions in the targeted areas include extremely localised populations, such as Mimetes stokoei, whose entire [world] population would fit onto a tennis court.”

An initial quick scoping exercise has shown that 214 of the 222 drill points on which they have spatial information occur within threatened ecosystems and plant species of conservation concern. These are listed on the International Union for Conservation of Nature (IUCN) Red List of Threatened Species.

“These are staggeringly high numbers for any development,” they note. “This would normally trigger several stringent requirements for a thorough environmental impact assessment.”

They suggest that scoping exercises should be undertaken for other taxa such as fish, amphibians and freshwater invertebrates.

Speaking on Cape Talk, West said their second concern related to the long-term drawdown of water from aquifers which might interfere with the region’s biodiversity, as much of the Cape’s flagship biological diversity relies on permanently or semi-permanently wet habitats.

“Some 214 of the 222 drill points on which they have spatial information occur within threatened ecosystems.”

In their letter the group notes, “This peculiar concentration of rare plants in wetland habitats is unique to the Cape among the Mediterranean climate regions globally. This may well be a consequence of the unique geology of fractured quartzites producing the aquifers and highly reliable aquifer-fed sources that we’re now targeting for bulk water supply.”

They also cite international examples of where aquifer abstraction has gone wrong. At the Swan plain aquifer near Perth, Australia, pumping is now stringently regulated to allow for an adequate ecological supply following the die-back of Australian proteas (Banksia species).

Against this background the scientists have offered to assist the City and have proposed a meeting.

“We’re also happy to discuss other approaches to augmenting water supply, such as clearing alien plants from rivers and critical water source areas. Our intention is not to delay the provision of new water sources to Cape Town but to ensure wise development of the resource to minimise irreversible environmental damage and the associate negative impacts on society and future water delivery.”

Commenting on CapeTalk, West said it was important to weigh up short-term benefits against the long-term environmental costs.

The water yield from the Table Mountain Aquifer Group is estimated to be between 25 and 80 million litres a day.

“That’s not nearly going to meet our entire future water budget; it’s definitely something in the bank. However, if I do some back-of-the-envelope calculations it’s a toilet flush, more or less, per person per day. The question is: Do we want to pay that cost? Is that something we think is worth developing or should we be trying to look at alternative means for augmenting our water that doesn’t come at this high environmental cost?”

“ …If I do some back-of-the-envelope calculations it’s a toilet flush, more or less, per person per day.”

West pays tribute to those researchers who are “doing their best science” to figure out where to locate these boreholes.

“We could put them in plantations or areas that are already developed. That will certainly minimise the impact – and that’s certainly the way one should move if we are to drill the system.” 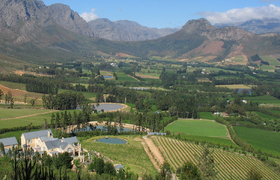