A first for water safety in South Africa

On average there are 200 drownings per year in the Western Cape, with children under five years of age most at risk. In an effort to reduce this number, the provincial government commissioned the South African Medical Research Council (SAMRC) to develop the country’s first drowning prevention and water-safety framework.

The Western Cape Strategic Framework for Drowning Prevention and Water Safety, which was launched in early November in Yzerfontein, is a collaborative effort between the government, the SAMRC, the University of Cape Town (UCT) and community stakeholders such as the National Sea Rescue Institute (NSRI) and Lifesaving South Africa.

A first for South Africa

The Western Cape government initiated the framework as the first “concerted and coordinated effort” of its kind in South Africa, said Dr Colleen Saunders, research manager in UCT’s Division of Emergency Medicine.

In the South African context, the existing research on water safety and drowning prevention is sparse, so the project was launched with a desk review of all existing literature on drowning prevention worldwide. This garnered particularly useful insights from countries such as Australia and Bangladesh, both of which have a high incidence of drowning.

“The framework ... highlights prevention efforts that are currently being implemented.”

Saunders, who coordinated the water-safety task team, said, “The key to the success of this project is the collaborative nature of the project. Many stakeholders, including Lifesaving South Africa, the National Sea Rescue Institute, Western Cape government and the academic community were key contributors.”

Professor Ashley van Niekerk of the SAMRC, who led the collaborative team on the development of the framework, said the major focus of this initiative was to identify priority drowning risks, high-risk activities, equipment and the communities most affected.

“The framework then highlights prevention efforts that are currently being implemented and others that may be considered appropriate for the prevention of drowning in the province.”

The project began in March of this year and was completed in November, in time for the summer holidays when the number of drownings is expected to rise.

Main findings of the framework

The strategic framework lists the highest risks for drowning in the province and offers non-prescriptive recommendations for improved water safety, taking into account environmental, social and behavioural factors.

Of concern is the fact that there is a noticeable spike in drownings on public holidays, especially in the summer months. Young children under the age of five are particularly at risk of drowning in and around the home, said Saunders, for example where open containers of water are accessible by toddlers. This is especially relevant now as water restrictions and potential shortages drive more households to store water.

In comparison to this, older children and adults are more at risk of drowning in larger, open bodies of water, such as dams, rivers and the ocean.

“When we think of drowning, we usually think of oceans and swimming pools, but many of these kinds of accidents happen in dams and rivers, especially in the Western Cape,” said Saunders.

Adolescent and young adult males are at very high risk of drowning. For every female who drowns, 4.4 males suffer the same fate, and males drown at a higher rate than females in every age category.

Not all water-safety incidents are fatal. Currently there is very little data on non-fatal drownings in the Western Cape but, based on international estimates, these are likely to far exceed the numbers of fatalities. Non-fatal drownings have a lasting social and economic impact on the province because of the associated health consequences. 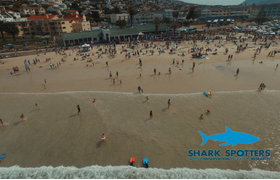