Professor Collet Dandara from the Faculty of Health Sciences and a number of his colleagues were concerned about how few black African students there were in their classes. Instead of waiting for things to improve on their own, they decided to find a way to actively help learners into tertiary institutions.

Together with student organisation Dikakapa-Everyday Heroes, they partnered with Fezeka Secondary School in Gugulethu.

“Our country is in need of an overhaul. Our communities are in crisis. If we are to truly see a change in black communities, we have to be willing to be part of the solution,” says Kamogelo Lebeko, chairperson of Dikakapa-Everyday Heroes.

This process will take time, but is possible if everyone contributes in some way, she says.

“Yes, the government can do large-scale projects. However, if all professionals ‘adopted’ their nearest township schools collectively, I think we could do much better,” notes Dandara.

The partnership, which has progressed over the past three years, began through motivational workshops. Identifying with the challenges faced by the scholars, the group shared their own stories with them and told how they had come to be at UCT.

“I used to walk to school, read using sunlight only, because of lack of electricity, and yet, I overcame all this to now be full professor at UCT.”

The hope was that the learners would be able to imagine themselves at tertiary institutions, as both students and staff.

“I come from humble beginnings. I used to walk to school, read using sunlight only, because of lack of electricity, and yet, I overcame all this to now be full professor at UCT,” says Dandara.

“They too, given the right motivation, can see that it is possible to change their circumstances through education.”

The group decided to focus on Fezeka, as this was the school of the late Andile Nofemelo, who was a research officer and student in the School of Public Health and Family Medicine.

“Andile did part of his education at Fezeka; his family stays in Gugulethu; and [he] managed to come to UCT until he achieved a PhD,” Dandara says.

He was an immediate and clear example to the learners that one among them had managed, through interest in his work, to change his life.

When it became apparent that the school lacked academic support for its grade 11 learners, Dikakapa-Everyday Heroes stepped in to provide tutoring.

“Our mandate seeks to encourage the learners to make their education a priority and it seemed counter-intuitive to not answer the call if it would ultimately assist the learners in doing that,” says Lebeko.

The collective then collaborated with the All Africa Academic Alliance (A3) to award the attendees of this tutoring programme for consistent attendance and for improvements in school results.

“The idea is ... to transform the mindset of the learners by showing them that just by showing up, they are already at a greater advantage and position than someone who chose not to,” she says.

It is essential that learners, who have so much stacked against them, have mentors and role models. They face, “a very different reality to their counterparts who have support and encouragement from a very young age, often from more than one person”, says Lebeko.

“Too often we find that even with resources, the attitude of young people is a barrier to their success due to lack of motivation, role models and encouragement.”

The project has already had promising outcomes, and the learners who participated in the programme are now preparing to enter tertiary education. They are working with the collective to navigate the applications and admissions processes. They hope to see some of their number at UCT in 2018.

“Some have indicated their intention to join UCT. They are excited, but are worried about their marks, [due to] the competitive applications to medical school,” says Dandara. They will continue working with the learners so that they can challenge for any positions in future, he adds.

The group hopes, in time, to provide financial support to learners as well, and to trace their progress from grade 10 all the way through the university system.

“Last year, we hosted an international conference in ‘Pharmacogenomics and Precision Medicine’ at UCT, and six of the top achieving learners from this school, Fezeka High, were invited to attend as delegates.

“They rubbed shoulders with international guests from over 15 countries. And talking to them later, most were so happy they could foresee a future in this sort of profession. They might not have understood most of the issues presented but felt included and valued and challenged to do this in future,” he says.

“I would like to challenge other professionals, either to join us so that we can offer this to many other township schools, or to form their own initiatives to support needy schools or learners in their areas.” 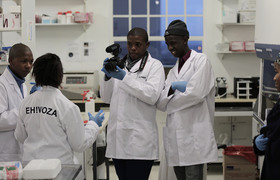 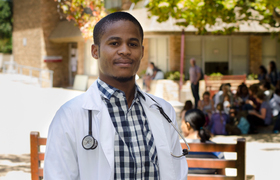 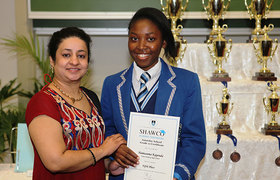