A second successful winter voyage aboard the ice-breaking research vessel SA Agulhas II into the Antarctic Marginal Ice Zone (MIZ) has been undertaken by members of the University of Cape Town (UCT) Sea Ice Research Team.

While the SA Agulhas II makes regular trips to the Antarctic in summer, the frequent storms and harsh conditions during winter make for a difficult working environment. Despite the conditions, the expedition was a success, building upon the first research trip carried out last year and continuing to expand the knowledge base about the region.

The SA Agulhas II set sail from Cape Town for the Southern Ocean at the end of June. The ship reached the start of the MIZ on 4 July, after six days at sea. However, strong winds and waves shifted the ice eastwards at an unprecedented rate, making it impossible to reach consolidated ice within the available time.

This did not deter the team, however, who proceeded to carry out the deployment of the trackers onto pancake ice in high winds and sub-zero temperatures.

Pancakes were collected – the smaller ones were taken whole for physical and mechanical testing while the larger ones were cored on deck, allowing a greater variety and number of samples to be taken.

The samples were analysed on board the ship for their physical properties including temperature and salinity, with the majority being transported to UCT upon the return of the ship to Cape Town on 13 July. These samples will be stored at UCT and will undergo mechanical testing to determine the strength, stiffness, fracture toughness and viscous elasticity of sea ice as well as crystallographic investigations.

Both the physical and mechanical results will be used as parameter inputs for a computational model, which is being developed by the Computational Continuum Mechanics Research Group headed by Skatulla and overseas collaborators, who were also part of this voyage.

One aim is to study and predict the break-up and fracture evolution of sea ice during the Antarctic spring. The researchers also hope to advance understanding of the complex material behaviour of sea ice in terms of its liquid and gas-filled porous structural composition and elucidate the mechanisms of biogeochemical exchanges with the underlying ocean and the brine expulsion.

Results and data from this trip will be shared between the collaborating parties, allowing a comprehensive and detailed understanding of the Antarctic MIZ to be developed. This is an ongoing endeavor, and the team hopes to build upon what was learnt in this expedition and return to the Southern Ocean next year to obtain further samples and data about pancake ice and to take core samples from consolidated ice. 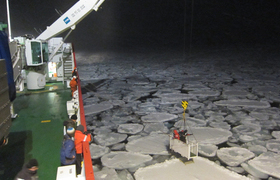