The two-week July trip had only ever been done once before, with most voyages happening during the summer months. Aboard the SA Agulhas II were a number of scientists and students from UCT and abroad.

They aimed to study the sea ice structure and morphology in the MIZ by means of observation; to collect frazil (soft ice formed by the accumulation of ice crystals in turbulent water) and pancake ice in the MIZ for analysis; to determine the physical properties of the collected frazil and pancake ice; and to store some of the pancake ice for testing its mechanical properties in the civil engineering laboratory at UCT. 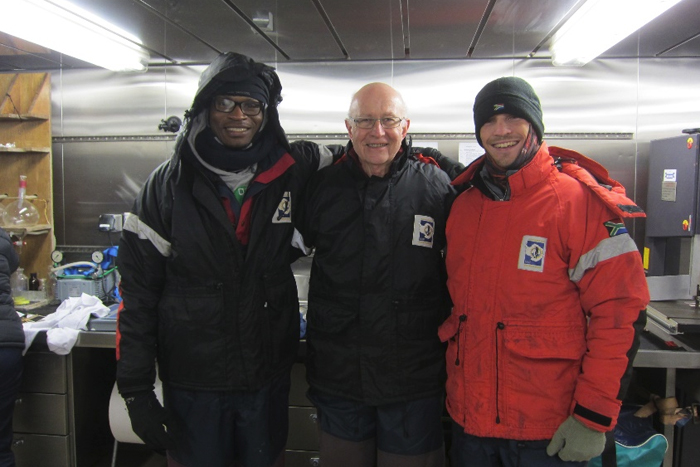 (From left) Emmanuel Omatuku Ngongo, Dr Keith MacHutchon and Devin Dollery on board the SA Agulhas II in the Marginal Ice Zone of Antarctica.

Reaching the MIZ on the night of 21 July 2016, their first task was to lift seven pancake-ice samples from the freezing cold water using lifting baskets. When the frazil needed collecting, members of the team were suspended over the ice by crane – not a feat for the faint of heart.

Once the ice had been collected, the mission returned to Cape Town, having met all their objectives and with most of the ice intact.

“Both the trips have been hugely successful within their very limited scopes, and they have afforded us the opportunity of finding out just how little we know, from both an oceanographic and engineering point of view, about the very significant seasonal variations that occur in the Antarctic sea ice domain, significantly impacting on the metocean [meteorological and oceanic] conditions of the Southern Ocean in terms of the atmospheric and oceanic circulation,” said Skatulla on behalf of the research group.