Postdoctoral research fellow Dr Mathew Njoroge at UCT’s Drug Discovery and Development Centre (H3D) recently returned from the 67th Lindau Nobel Laureate Meeting in Germany. The annual scientific conferences have been held in Lindau since 1951, bringing together Nobel laureates and young scientists to foster scientific exchanges between different generations and cultures. This year’s meeting was dedicated to chemistry. Helen Swingler asked Njoroge about his experiences.

HS: Please tell me about yourself.

MN: I was born in Kenya and did all my basic education there. My first degree is a Bachelor of Pharmacy, from the University of Nairobi. I came to UCT after a one-year pharmacy internship with the Ministry of Health, Kenya.

HS: What attracted you to UCT?

MN: South Africa has always been a beacon of scientific excellence in Africa and was in my sights as soon as I started thinking about postgraduate education. The choice of UCT was due to a personal connection. I was already quite interested in drug discovery and was lucky enough to have a final-year project supervisor at the University of Nairobi who had just graduated with her PhD from the Department of Chemistry, UCT. Her supervisor had been Professor Kelly Chibale, who was an external examiner at our faculty. During a visit when I was in my final year, he gave a very inspiring lecture on drug discovery in malaria, at the end of which my undergraduate supervisor introduced us. He offered me an MSc position in his lab and the rest, as they say, is history. I travelled to UCT as soon as I could and have been in drug discovery since.

HS: What does your current work at H3D involve?

MN: I’m currently a postdoctoral research fellow, part of the team which evaluates drugs and new compounds to ensure that their absorption, distribution, metabolism and excretion (ADME) characteristics are appropriate for the disease area being investigated.

HS: How were you chosen to attend the Lindau Nobel Laureate Meeting?

MN: I was nominated by Novartis, following my participation in the Novartis Next Generation Scientist (NGS) programme. I then underwent a rigorous selection process by the Lindau Foundation and was humbled to receive the news that I had been selected as a participant.

HS: Rubbing shoulders with 420 young scientists and 28 Nobel laureates at the meeting must have been intriguing. What were the highlights of this experience?

MN: The main highlight was meeting and interacting with so many Nobel laureates. It was inspiring to learn from their approaches to science, and to other challenges they faced as they built their careers. The other highlight was interacting with the other young scientists selected for the meeting. I enjoyed hearing about different fields of chemistry and finding connections between my work and theirs. The future of science is definitely bright.

HS: Was there a Nobel laureate you were particularly keen to meet?

MN: I wouldn’t want to reveal my favourites, but I’ll say that the meeting allowed us to get a good balance between the hard-core science and the human elements of each Nobel laureate. It’s not every day that you get to see a Nobel laureate enter the stage to The Big Bang Theory theme song (George Smoot, Nobel Physics 2006), or get The Simpsons quoted in a science lecture (William Moerner, Nobel Chemistry 2014) − or even discuss malaria over lunch with a Nobel laureate (Peter Agre, Nobel Chemistry 2003).

HS: Did you have a chance to travel further than Lindau?

MN: The NGS team invited all three Novartis-nominated Lindau participants (myself; Phuti Chelopo of the Council for Scientific and Industrial Research (CSIR), Pretoria; and Ludovico Tulli, postdoc at Novartis) to Basel, where we got to reconnect with the team, meet this year’s NGS interns and visit our former host departments. We ended our visit at an event with Kurt Wüthrich (Nobel Chemistry 2002) where we discussed our scientific journey and gave some highlights of the Lindau experience to Novartis scientists.

HS: Has the experience influenced your sense of purpose as a scientist?

MN: The Nobel laureates’ main message was that to get to the heights of science you need to find your passion, and pursue it persistently and methodically, while learning from surprises and failures. I hope to take this message to heart as I build my career in science.

HS: The Lindau logo uses three words: educate, inspire, connect. What three words would you use to describe your experiences there?

HS: Was there an opportunity to ‘represent’ South Africa in any way at Lindau? 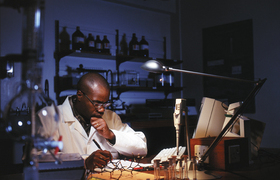 Research and innovation
African countries are stuck on the free movement of people. How to break the logjam 19 Jan 2022 Republished
TOP