Birders nationwide were all aflutter this past Saturday over the Birding Big Day, an annual challenge that pits teams all over the country against one another to see who can record the most bird species in a single day.

The rules are simple: there can be no more than four members in a team, the majority of the team have to agree on the identification for it to count, and your search area may not exceed 100 km in diameter.

The competition is run by Birdlife SA, a national NGO that is working to promote and conserve South Africa's avian diversity. This year over 300 teams competed nationwide, making it the biggest Birding Big Day in South African history.

While YAB stands for Youth Africa Birding, a Facebook movement that encourages birding among the youth, the hashtag is a light-hearted reference to the recent student protests (“swees” are a common bird species – the Swee Waxbill). 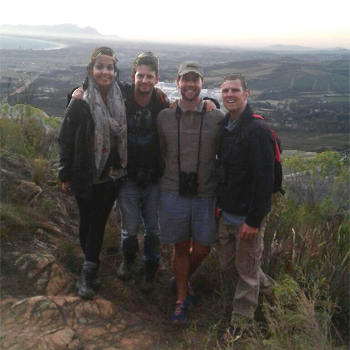 The YAB team was made up of Andrew de Blocq (MSc in biological sciences), Garth Shaw (PhD in education), Nick Fordyce (recent MSc graduate in environmental law), and Jessleena Suri (PhD in statistical sciences). De Blocq and Suri are studying through the Percy FitzPatrick Institute of African Ornithology at UCT, an NRF Centre of Excellence, and are both serving members on the committee of the newly fledged UCT Birding Club.

The team started at midnight in Simon's Town, ticking off a sleepy African Penguin. From there they raced through Kommetjie, Wildevoelvlei Wastewater Treatment Works, Constantia, Tygerberg and Paarl – all before sunrise!

The team managed to tick off a monumental 201 bird species, which placed them first in the Western Cape. Second place went to the George Lawaaimakers with 199, and third to the Wildepoue in Robertson with 191.

Highlights of the day included two national rarities in the form of a European Honey Buzzard at the Paarl Bird Sanctuary, and a Red-necked Phalarope at Strandfontein.

The Swee Waxbills did indeed fall on the day at Paarl Mountain Reserve.

The team used the opportunity to raise some funds for conservation, and ended up collecting over R3 000 on behalf of Birdlife SA.