Hunting for leaks in a mismanaged water system

Africa is home to the highest number of water-scarce countries in the world. Growing populations and urbanisation are increasing demand, while water supply is shrinking. In this water crisis, the continent cannot afford to lose one drop, and yet it does – continuously – through leaks in pipes and general mismanagement. Professor Kobus van Zyl has spent the last 15 years investigating the poor infrastructure that leads to these leaks and researching how to locate them; and recently, he and his team have invented a device that could change the game.

Van Zyl's research has led to the development of a pipe condition assessment device, currently being patented with UCT. The device is easily transportable and connects to a section of pipe using a hydrant connection. With this gadget, Van Zyl can assess the condition of the section of an individual pipe “with greater accuracy than we can do with any other method,” he says. As this stage the device can determine leakage rate and Van Zyl is working towards finding ways to identify the exact location of the leaks.

A device such as this would be useful anywhere in the world, but it is particularly crucial in places where water systems are mismanaged. This is true of many municipalities in South Africa, and it is exacerbating both the quantity and quality of available water.

One reason for this is political interference in municipal services, says van Zyl.
In a study conducted for the Water Research Commission (WRC), van Zyl and his students found that only 50% of plumbing fittings installed in South Africa are compliant with the legally binding requirements set by the South African Bureau of Standards (SABS). In low-income developments, indications are that levels of compliance drop to less than 15%. While van Zyl stresses that the part of the investigation into low-income developments was not comprehensive, it is nevertheless shocking: “The government is not building houses according to their own rules,” he says.

The reason, according to van Zyl, is political pressure. During the WRC project, a civil engineer working for one of the big metros told van Zyl that he was personally instructed to connect water for the community even though their plumbing system was non-compliant. “You can understand the demands on politicians to service the community,” says van Zyl, “but we can't solve the housing problem by creating a leakage problem.” Furthermore, the cost of repairing and maintaining poorly installed infrastructure in the future is far greater than the upfront costs of installing SABS-compliant systems.

To resist the short-term solutions proposed by politicians, qualified people are needed, but there is a lack of experienced and qualified technical staff at municipalities, says van Zyl. In fact, it turns out that Auckland Zoo in New Zealand has more civil engineering professionals in its service than 86% of South African municipalities, according to a study by Allyson Lawless, former president of South African Institution of Civil Engineering.

Corruption makes a bad situation worse, and is effectively “stealing from the poor,” says van Zyl:. “It is the poor who will really suffer from water mismanagement in this country.”

The lack of expertise is evident in the decision by many municipalities to introduce watershedding in response to severe drought conditions. Otherwise known as an 'intermittent water supply, this approach is currently used in Durban, where the municipality switches off the water at 10pm and switches it on again at 4am the next morning.

On the face of it, watershedding makes sense – a similar system to the loadshedding that has long been used in South Africa to cope with variable electricity supplies. However, watershedding is problematic in a way that loadshedding is not. Water pipes are very different from electricity wires, says van Zyl: they run about a metre deep under our streets and around buildings. At certain points there are connections to houses and to water meters. In addition to the soil and organic matter that surrounds these pipes, storm water and pollution washes down from the surface and encircles them. Then there are the sewer systems that run underground. If these leak, sewerage water can come into contact with water pipes.

“When there is pressure in the water pipes created by the constant flow of running water, there is no risk to the quality of that water, ” says van Zyl. However, during watershedding, the pipes are emptied and pressure drops. This makes it much more likely for the contaminants surrounding the pipes to enter through any weaknesses. “If you leave it for eight hours, bacteria can grow and stick to the walls,” says van Zyl.

Another negative consequence of watershedding is that the number of burst pipes increases by 300%, according to a previous study. Air entering the water pipes during water-shedding can also damage water meters. And the system doesn't differentiate between air and water, so residents are charged for air that pushes through their meters.

Solutions in the cloud

Investing in research projects that generate sustainable solutions for solving South Africa's water problems is desperately needed, says van Zyl. His pipe condition assessment device is a small part of the puzzle; two other components are in development. One of these is a mobile app that enables the operator to be “the eyes and the ears of the municipality,” says van Zyl. Using this app, the device operators can report illegal connections, leaks or a valve in need of repair by taking a photograph and uploading it into the app. The app embeds GPS coordinates into the image, collates other revelant data (such as where teams are working on the problem) and transfers the data to a cloud – or virtual centre for data storage. 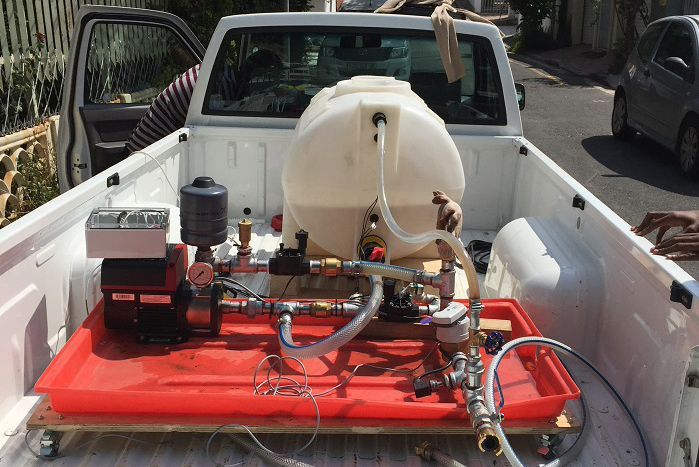 Hunting for leaks: The pipe condition assessment device invented by Prof van Zyl and his team.

This is the third component: a cloud-based management system geared towards monitoring applications, data and services residing in the cloud from where the information can be extracted from anywhere in the world.

Van Zyl's dream is for this device to become instrumental in solving some of the water-related problems facing the developing world. By creating an online forum, he hopes to facilitate engagement between consultants working in local villages and town management. In this way, local authorities can put forward a proposal to analyse and fix leaks in their communities. Researchers submit proposals through an online bidding process, giving communities access to experts who can be based anywhere in the world. The app will enable potential funders to track conditions over time, so they can monitor their investment and ensure that the maintenance is done. Van Zyl plans to run the first trials for these devices in Cape Town early next year.

“We need to have people who can pursue their interests, generate knowledge and develop products like these to solve the world's problems,” says van Zyl. “One hundred years from now, none of us will be here. It is our children's children that we should be thinking about”.