Seeds under siege: it's time to support traditional systems

Seeds are the very essence of life. From those growing a multiplicity of grains, legumes and vegetables to others struggling to produce enough to feed their families, seeds provide the mainstay for Africa's 500 million small-scale farmers. Seeds are also at the heart of rich and varied cultures. They accompany brides on their nuptial journeys and deliver ancestral blessings for good fortune.

But seeds are also under siege as they increasingly become commodified. Since 2000, the growth of the commercial seed market has almost tripled. More than 63% of the world's commercial seed is now owned by six corporations. New proposed mergers will reduce this to just three.

These concentrations of political and economic power not only reduce farmers' choices, but also signal profound changes for Africa.

Hybrid and genetically modified seeds, touted by these giants, are proposed as key drivers in the transformation of African smallholder agriculture. This, even though an increasing body of evidence points to problems associated with their high cost and the resultant debt that farmers incur.

Hybrid seeds cannot be replanted from year to year like traditional seed because they lose their vigour. Contracts or “technology agreements” between farmers and seed companies dictate how farmers should grow their crops and force farmers to buy new genetically modified seed each year.

These seeds also require expensive and environmentally damaging chemical inputs to be effective. Herbicide tolerant crops, for example, are genetically engineered to be resistant to Roundup Ready – the brand name for the controversial weed-killer known as glyphosate. This means that the herbicide will kill the weeds but not the engineered crop. The seed is therefore only effective if used with Roundup.

There are other concerns. Genetically modified crops can contaminate traditional seed and damage generations of on-farm breeding.

For these reasons, many question whether seed bred for large-scale industrial agriculture is appropriate for African smallholders. To date, most of Africa's farmers still rely on traditional seeds. The adoption of hybrid and genetically modified seed has been low. Only three African countries – South Africa, Burkina Faso and Sudan – have introduced genetically modified seed, including insect resistant cotton and maize and herbicide tolerant maize and soybean.

The new wave of philanthropy sweeping the continent, such the Alliance for a Green Revolution in Africa programmes, promote the adoption of hybrid and genetically modified seed and chemical inputs.

In a similar fashion, institutions such as the World Bank, the New Alliance for Food Security and Nutrition and large consumer companies are pursuing quick-fix solutions such as bio-fortification. This is a process to improve the nutritional quality of food through plant breeding or genetic modification. Many have expressed concern that other approaches based on diverse farming systems and diets are being overlooked in the process.

The International Panel of Experts on Sustainable Food Systems is an initiative to inform and advise the policy debate on how to reform food systems across the world. It recently concluded that both food and nutritional security are better served by an approach which focuses on:

Across Africa there is growing evidence of the impacts of seed industrialisation for smallholder farmers. In Malawi, for example, local varieties are increasingly unavailable because of neoliberal agricultural reforms that have subsidised fertilisers and hybrid seeds and promoted cash crops. In Burkina Faso, a decision has been made to completely phase out genetically modified cotton due to its inferior lint quality. This has not only affected small-scale farmers. It has also jeopardised West Africa's world cotton market advantage. 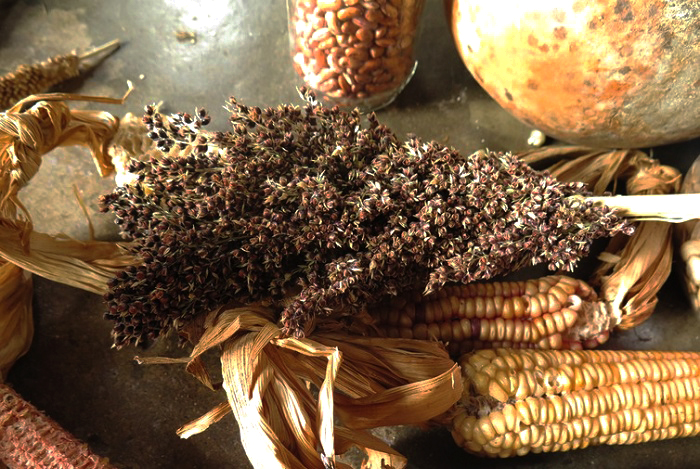 Traditional seeds are preferred by many farmers across Africa.

South Africa has some 2.3 million small-scale farmers. They cultivate a combination of traditional seeds passed on for generations, with some also growing commercial hybrid and genetically modified seeds.

Traditional seed that is planted varies according to the climate, soil and context. It typically includes grains such as millet, sorghum, and maize. There's also a variety of legumes – mung beans, cowpeas, peanuts and jugo beans – and indigenous leafy vegetables like morogo.

Traditional seed systems are vulnerable for other reasons too. Modernisation and increased urbanisation are altering food consumption patterns. Planting seasons have changed.

There are also challenges with multiplying and saving seed. Traditional seed preservation methods such as ash or cow dung are still prevalent. But knowledge about these techniques is dying out – particularly given that more young people are migrating to urban centres.

There are some solutions.

Governments need to recognise the importance of farmer-led seed systems for food security. They should act to prevent inappropriate interventions.

Extension services need to provide independent advice that is relevant to farmers' needs rather than relying on seed and agrichemical companies.

Gene banks need to be reimagined to serve the needs of smallholder farmers. Both science and traditional knowledge need to be used to find solutions.

Careers based on agroecology need to be created so that young people become excited to get involved.

These actions would contribute to returning seed production and knowledge to the hands of local communities, inspiring a shift towards ecologically sustainable and just agricultural futures.

This article reflects discussions at a seminar convened by the Seed and Knowledge Initiative (SKI) in September 2016.