There was volcanic rock, kimberlite (from which diamonds are mined) and an array of other wonderful rock specimens as UCT's Department of Geological Sciences exhibited the wares of its world-renowned Upper Mantle Research Collection.

The exhibition, called Messengers from the Mantle: Diamonds and Craton Roots, commemorated 50 years of mantle research at UCT. It ran from 29 August to 2 September 2016 as part of the 35th International Geological Congress (IGC), held at the Cape Town International Convention Centre.

The specimens being exhibited were from the Upper Mantle Research Collection, which is housed at UCT. It's the largest research collection of its kind in the world, with some 14 000 curated specimens weighing in at an estimated 20 tonnes.

“An important aspect of the exhibit is illustrating how the mining industry has produced mantle samples crucial to scientific research and, in turn, how research on mantle samples has helped refine exploration models that have allowed new diamond deposits to be discovered,” said Dr Phil Janney, of UCT's geological sciences department.

At the exhibition's formal opening event on 31 August 2016, the mantle collection was renamed after its founder, Emeritus Professor John Gurney, in honour of his canonical research of the geochemistry of the earth's mantle and for establishing the Upper Mantle Research Collection and making it available to researchers around the world.

“Over the past 50 years, the collection has been mainly under the stewardship of Prof Gurney, and it is mainly through him and his former students conducting trips to collect mantle specimens brought to the surface in kimberlite pipes and diamond mines, both throughout southern Africa and internationally, that the collection has grown to its current great size,” added Janney.

“The occasion of the IGC coming to Cape Town in 2016, roughly coinciding with the 50th anniversary of the collection, seemed like an ideal time for John, and several others of us in the Department of Geological Sciences, to celebrate and commemorate the collection and its impact on geological research and the diamond industry through the creation of a museum-type exhibition.”

Have a look at some of the eye-catching rocks from the exhibition. 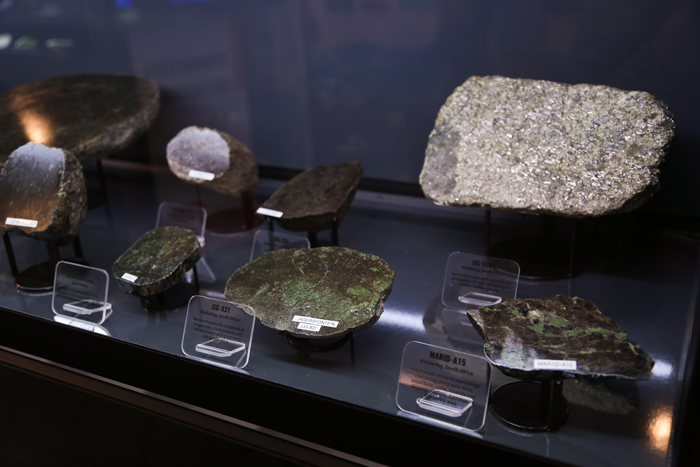 Megacrysts – big crystals, if you were wondering – are significantly larger than the encircling matrix and are found in igneous and metamorphic rock. These megacrysts, sourced from around southern Africa, were just one of ten cases on display at the exhibition. 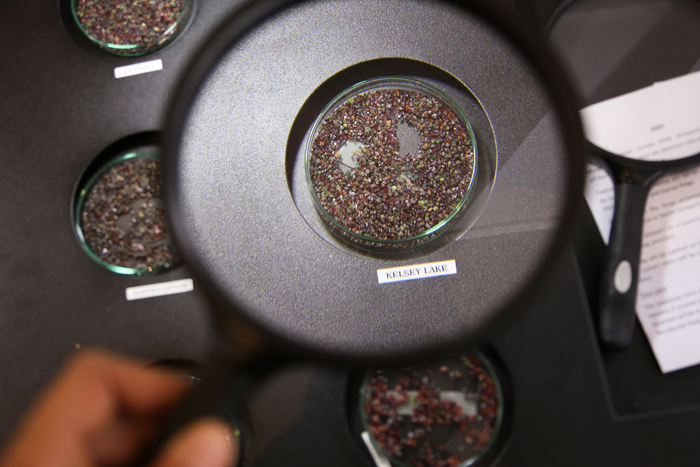 Through the looking glass: It was an eye-opening experience for patrons who got up close and personal with the specimens. The Upper Mantle Research Collection is no stranger to having its wares inspected closely. Generations of scholars have used its samples to conduct research and write theses. 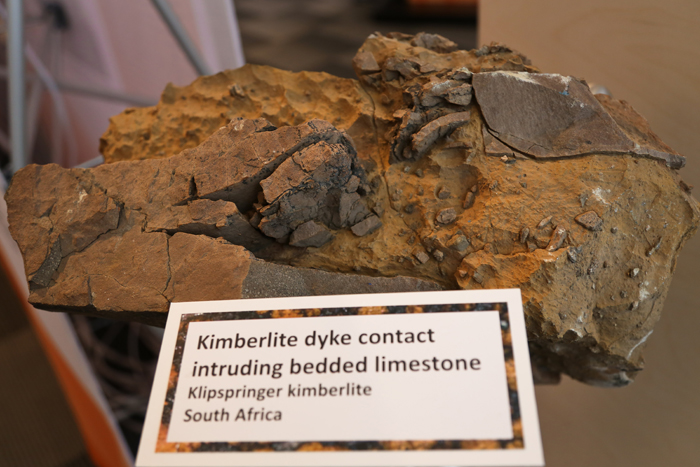 The kimberlite that is best known for containing diamonds. A vast range of kimberlites were on display. 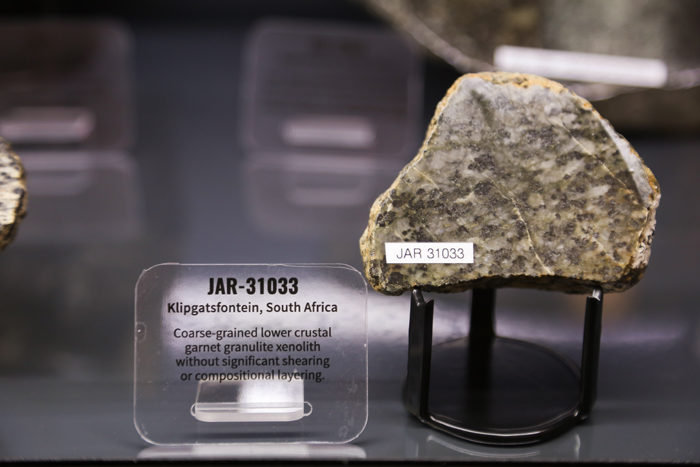 A xenolith is a piece of rock trapped in another type of rock. The white pieces in this xenolith is called igneous rock, which is the rock that is formed after magma cools. The speckles are, as described by the slide, coarse-grained lower crustal garnet granulite. 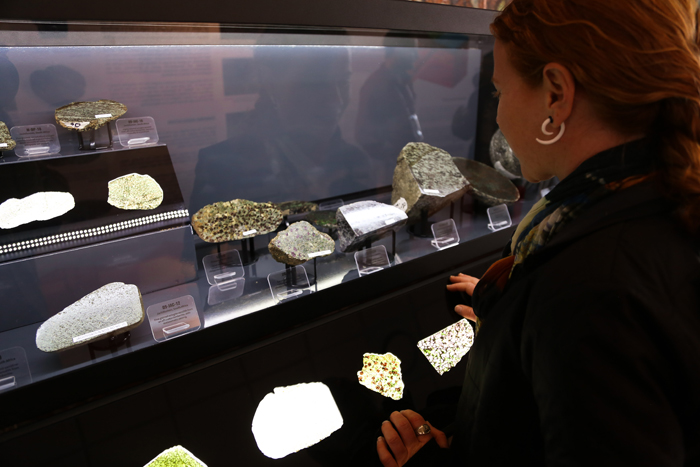 “Many geologists have never encountered mantle rocks and even those with some familiarity often view them only as a curiosity,” says Dr Phil Janney of UCT's Department of Geological Sciences, which houses the Mantle Room. “The exhibit content, therefore, is aimed at the educated layperson and aims to place the science of the earth's mantle into the general context of 'big picture' geology, such as earthquakes, plate tectonics, volcanoes, the rock cycle and mining.” 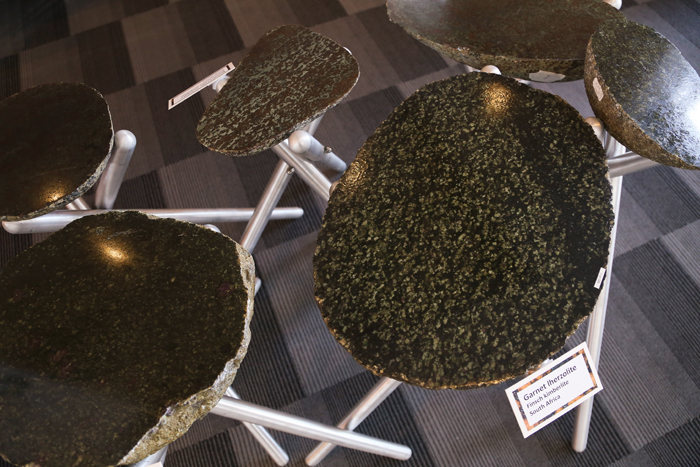 They may look like probes from outer space, but ultramafic rocks like these lherzolites are derived from the earth's mantle. Ultramafic rocks are rich in minerals like iron and magnesium, which gives them their dark colouring. 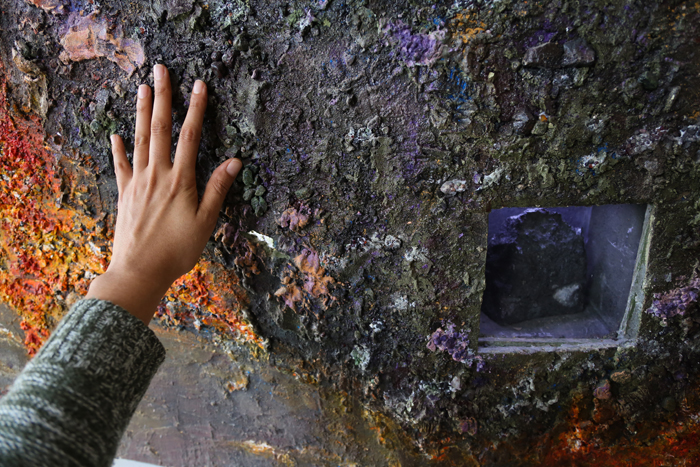 You've got to hand it to the photographer for this striking picture. The exhibition was a window to an underground world hidden to all but a few scientists, explorers and miners. The artwork is a piece created by Dr Roderick Sauls. 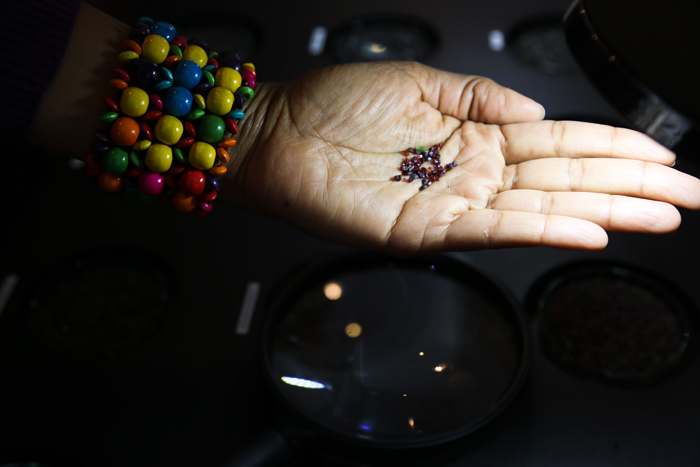 Millions of years of pressure, heat and upheaval nestled in the palm of a hand. 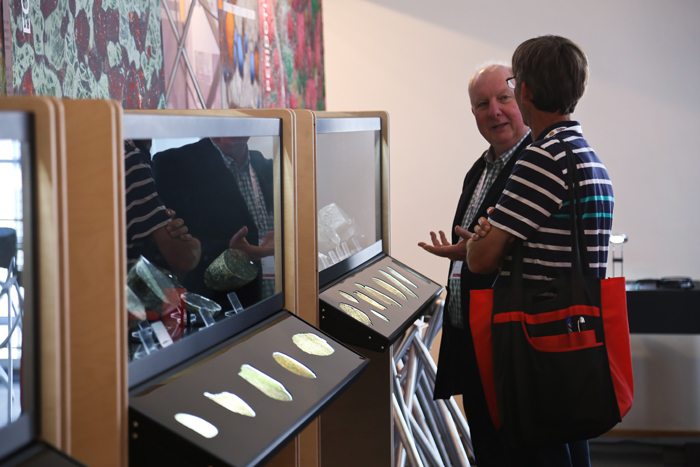