Landscapes across southern Africa are changing at an alarming rate because of changes in land use and climate. Repeat photography (photographing the same place over time) of historical landscapes has long been used as a tool to document these changes across the world. Harnessing this tool and the growing contributions of citizen scientists, UCT's Plant Conservation Unit (PCU) and the Animal Demography Unit (ADU) launched rePhotoSA in 2015.

The PCU has digitised over 20 000 historical landscape photographs for research purposes. This is one of the largest collections in southern Africa. With the help of students and colleagues, over 2 000 historical photographs have been 'repeated' and subsequently used in understanding various issues. These include the rate of alien vegetation invasions, bush encroachment and biome shifts, changing stocking rates and land-use practices, the effects of post-fire vegetation recovery, growth rates and long-term survival of key threatened plant species.

“This effort made by our team is important, but we still have a long way to go if we want to understand these changes better,” said Samantha Venter, project coordinator of rePhotoSA.

“Citizen scientists could make an important contribution to this research because they can reach vast areas of southern Africa that our team may never get to. The combined effort means that more historical images can be repeated to understand these changes more efficiently.”

Have camera, will travel

The project sends citizen scientists on “epic adventures” to find and repeat the historical landscape photographs across a particular region. At the moment, 5 133 historical photographs have been uploaded to the rePhotoSA website, but more will be uploaded as collections are processed.

“In addition, a few more historical photographic collections have been received at the Plant Conservation Unit, which we are in the process of digitising and uploading to our website. With every historical collection received, we hope to fill in more of the 'gaps'.”

The rePhotoSA project is relatively technical compared to other citizen science projects because it requires knowledge of the landscape, skill in using a camera and skill in taking an accurate repeat photograph. However, a step-by-step guide is available on the website with instructions on how to take a repeat photo and the rePhotoSA team are always on hand to assist.

“With each repeat, we take one step forward towards understanding how and why the vegetation of southern Africa has changed or is changing,” added Venter. “In addition, we hope to use the information gained from this project to better understand changes in animal distributions observed from images uploaded to the Virtual Museum and the second Southern African Bird Atlas Project.” 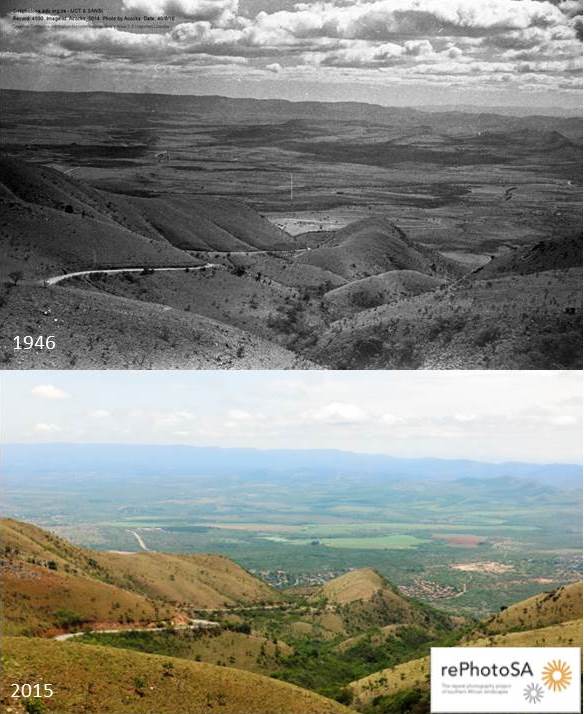 “The Havelock Road climbing the mountain” near Barberton was taken by John Acocks in 1946. The repeat photograph was taken 69 years later in 2015 by Nico and Delia Oosthuizen. It shows bush encroachment in the mountain valleys and an expanding human settlement on the plains below.

Join in and join up

In the past few months, rePhotoSA has connected with the public on various social media platforms including Facebook (facebook.com/groups/rePhotoSA) and Instagram (@rePhotoSA_uct) and has presented their work at various citizen science days. These include the ADU's 20th Citizen Science Day in Kimberley in May and their 22nd Citizen Science Day at Intaka Island Environmental Education Centre in July.

In May Professor Timm Hoffman, director of the PCU, was invited to the Buffelskloof Herbarium at Buffelskloof Private Nature Reserve to address citizen scientists and researchers about the project. Professor Les Underhill, director of the ADU, and Dieter Oschadleus, project coordinator of Photos of Weaver Nests (PHOWN), have arranged other events across South Africa, which will take place later in the year.

In addition, if you have a historical (up to the end of the 20th century) photographic collection of landscapes across southern Africa that you would like to donate to the PCU for use in rePhotoSA and other research, please contact them.

“The adventure with rePhotoSA has only just begun and we look forward to seeing what the future has in store for this important project,” said Venter.

(Those interested in participating in the project can register with rePhotoSA. If you are already registered with any one of the ADU's citizen science projects, you do not need to register again.)