Meet the number one patron at Hot Rock Café

When you start studying geology, says UCT's Dr Johann Diener, there's a “loss of innocence” as one's eyes are exposed to the darkest workings of the Earth's bowels.

Here's a case in point: when Diener gazes out of his Western window at the majesty of Devil's Peak and Table Mountain, what does he see?

But not just any pile of sand.

“The biggest pile of sand in the world. I don't know what it's doing there,” he protests. “It is very homogenous and slightly strange. I'm, like, yeah, okay, it makes pretty rocks and it's nice for climbing, but geologically, for me, not that interesting.”

For Diener, who recently earned some grant money through a Claude Leon Merit Award, “interesting” means what a rock in the Earth's crust does when it's heated so much or put under such pressure that the minerals inside start to melt. And Table Mountain's sandstone just isn't up to the task.

“I'm going to get into trouble for saying that, aren't I?” 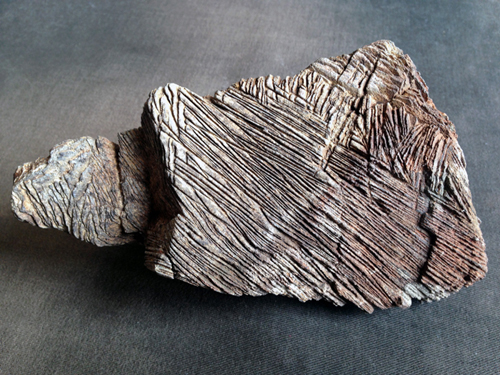 This is a 3.5-billion- year-old sample of komatiite that Dr Johann Diener keeps in his office. Photo Johann Diener.

Diener holds up a dense, oddly striated rock; irregular weathering is perhaps to be expected of a 3.5-billion-year-old specimen. It's a piece of komatiite – a rock borne, as you might have wagered, in the Komati River area in South Africa.

“The little criss-crossing veins show that this rock crystallised in quite a unique way,” explains Diener.

He began his career by looking at really old things, and for the past ten years or so has studied really hot things. The komatiite marries Diener's early career with what he does now: really old rocks and really hot rocks.

For the past ten years or so, he's puzzled over this question: What happens to the crust when it gets really hot?

He explores the conditions under which, when the crust gets really hot, rocks start melting. The rocks don't turn into magma straight away; they melt progressively. There is also a fundamental physical change that occurs once rocks begin to melt: they become much weaker and can eventually move around like magma does.

It's at this point that Diener can extract age-old rocks from the crust and begin his work.

“The main thing I'm interested in is what conditions you need in terms of pressure, temperature, and everything else, for rocks to melt, and what are the processes that control melting in terms of which minerals and things are involved, because it's the minerals in the rock that actually melt,” he says.

“That's from the chemical side of things. And then from the physical side of things, I'm interested in deformation and such processes that allow the melted rock to move around and be squeezed out, and eventually making its way up into the crust and becoming a granite somewhere.”

He investigates this through thermodynamic modelling. Mathematical descriptions of the minerals are plugged into mathematical models and predictive computer programmes to test how rocks behave under different conditions. Some geologists make experimental capsules to a similar end. But both of these processes take time.

“Because we can't go down there and see for ourselves, of course, we've got to look at rocks that have been through those processes in the past,” says Diener.

He spends much time gathering rocks in Namibia and the Namaqualand, where the Earth has brought them to its surface after guarding their secrets for millions and sometimes billions of years. Then it's up to Diener and fellow geologists to interpret the “reasonable clues” that have been preserved, even after all this time, for the rest of us to understand how our world came to be.

“That's the story. That's what we do. We have to look at quite cryptic clues from a long time ago, of processes and things that happened on unimaginably long timescales and try to work out what went on.

On pelites and mafic rocks

Until very recently, geologists were limited to studying pelites, a clay-rich sediment of which a thin veneer gets deposited in the oceans before being caught up in tectonic processes like mountain building. Pelites make up a small volume of the crust only so investigating their melting behaviour would be representative of about 2 or 3% of the Earth's crust.

Now a mathematical model for analysing chemically convoluted mafic rocks has been developed. Mafic rocks are the basaltic beasts that make up the oceanic crust and are much more abundant than their pelitic counterparts.

Diener plans to use this model to study the melting behaviour of mafic rocks, which would give him a much more representative idea of how the Earth's crust responds to immense heat and pressure.

This is a huge deal for geology. But Diener has something else up his sleeve and uses a simple example as illustration.

The buffering effect of melting

“My feeling is that the melting behaviour of rocks is exactly the same,” Diener muses. “You heat the rock up until you get to the temperature the rock melts at, you add more heat to it and the temperature doesn't rise further: all you get is more melt.

“That isn't something that people have really thought about – that the temperature in the crust can actually be controlled by melting reactions that suck up all the heat that is going into the crust, rather than the heat going into raising the temperature of the crust more. So it could be that if you get rocks that melt a lot, you can't get the crust a lot hotter than the conditions under which the rock is melting.”

That is, unless you leave it hot for such a long time that all the minerals in the rock melt, which is when things could start heating up again.

How would you test this?

“I'm still working on that!”

Needless to say, this is simply beyond Table Mountain's range of capabilities.

Fortunately for Diener, the Table Mountain range is not known for grumbling its opinions too often. Nevertheless, the senior lecturer in geology insists on a healthy respect for the natural world. With limited exposure to geology in schools, piquing interest in his discipline is tough.

Many geology students enter the field because of the allure of big salaries from the mining industry in particular. Diener's challenge is compounded because “the research that I do has only very tangential applications to anything that happens in the real world, in terms of making money”.

But the Earth is intrinsically valuable.

“We depend on it for everything. And it does fight back occasionally with volcanoes and earthquakes and the like – and it usually wins.

“I taught engineers for a while, and I said, hey, you know, you guys need to know something about geology and the Earth because if it's your dam or bridge up against Mother Nature, then Mother Nature will win, eventually.”

One can never “switch off” the inner geologist, Diener -laments. On a recent holiday with his wife to Zambia and Malawi, he occasionally found himself distracted by the ground − “I wonder what's going on down there?” − as his wife was being entranced by nearby herds of elephant.