The benefits of setting a national minimum wage at R2 447 per month could, on average, outweigh the costs, but setting it at R3 400 could risk far greater job losses, warns a research paper from UCT's Development Policy Research Unit (DPRU).

Weighing up the costs and risks of setting a national minimum wage at these two levels, the DPRU, in a study led by Professor Haroon Bhorat, argue that a baseline of R2 447 could result in job losses of up to 281 000 people across the board. This is far more palatable than the more than 500 000 low-wage workers who might expect to lose their jobs should the baseline be set at R3 400.

But when it comes to the bigger picture of socio-economic equity, a national minimum wage would only be one – and perhaps a minor – component of a broader social programme to reduce inequality, boost employment and grow the economy.

How they got to those numbers

Bhorat and his fellow researchers attempted to provide a three-part analysis. The first part was an international review of the experience of minimum wages in mainly developing countries, although they did touch on developed countries. Within that set of developing countries, they focused on emerging markets.

They explored the types of minimum wages used around the world – whether they were sectoral or national – including the reach, and the type of enforcement used. They also looked at the impact of minimum wages on employment in particular.

The second part of the study was an examination of existing research on minimum wages in South Africa, “because of course we do have an existing system of minimum wages”, says Bhorat. These were set either by sector (such as in agriculture) or occupation (contract cleaners), he added.

“We looked at the impact of those wage determinations on various economic outcomes as reported by the existing peer-reviewed studies,” says Bhorat.

The third part of the analysis was to explore a feasible range for a minimum wage.

“We looked at the number of workers who would be affected if we set the minimum wage at those two levels.”

Those two levels were firstly the median of the existing sectoral determinations, and then the median South African wage, set at R2 447 and R3 400 respectively.

From this, the researchers asked how employment – and job losses – would be affected should minimum wages be implemented at either of those levels. Computable General Equilibrium (CGE) modelling helped with this component of the research, says Bhorat. 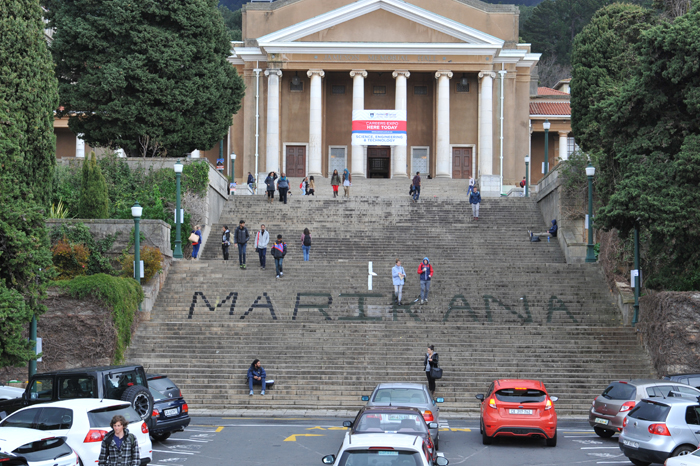 A minimum wage of, say, R2 447 a month would be less than what some mineworkers are earning, and a key question, says Prof Haroon Bhorat, is whether this would actually improve the livelihoods of affected workers.

Another aspect was thinking through the role played by enforcement in applying the proposed national minimum wage, says Bhorat.

“Once you set up the minimum, you've got to enforce this. You've got to find mechanisms for ensuring that the law is adhered to by employers, and that employees have an appropriate voice in terms of the law.”

So Bhorat and the other researchers explored existing levels of minimum-wage violation in South Africa and considered which factors might impact the levels of violation, and, as an extension, how to improve enforcement of the law.

South Africa's enforcement model is somewhat conciliatory, says Bhorat. An inspector typically engages with non-compliant employers and explains the law to them.

“If a fine is paid, an employer still has time to remedy their practice. Of course, if it's an egregious violation, the law could take a very different course.”

But there are challenges to researching enforcement. How do you know when and to what extent inspectors turn a blind eye, for example?

“The report says that if you're talking about a national minimum wage, perhaps it is time to talk about enforcement, the role of the inspectorate, and so on,” says Bhorat. “Something to keep in mind is that evidence shows that violation of the law is in part related to how high the minimum wage is, relative to, say, mean wages.”

Is that simply because employers can't afford it?

There has been a lot of research done in Costa Rica, for example, which shows that appropriate levels of awareness and spending on awareness campaigns will reduce violation of the law, says Bhorat. Knowing that one will get a penalty, or knowing that there is a culture of paying the minimum wage in your country, or that one's neighbour is doing it, is generally seen as a good instrument for increasing compliance with the law, he explains.

“There's evidence of quite creative campaigns in Costa Rica. They got the national soccer team to advertise on the back of its shirts that a national minimum wage would be introduced.”

South Africa had a successful awareness campaign of its own in the case of the domestic worker minimum wage and to some extent the taxi minimum wage, says Bhorat.

“You can actually trace that back to government expenditure on awareness campaigns, and that has undoubtedly influenced levels of compliance positively.”

Government is willing, says Bhorat, but does it always have the budget?

A national minimum wage can seem like an expensive exercise for all concerned, from government to business.

“That's the core of this report: to explore the ranges of wages that seem feasible, and to warn that under certain conditions there may be employment losses, even within an environment where there are some violations of the law.

As for timeframes, the state has not yet committed to when it will implement a national minimum wage. It is unlikely to be before the local elections, though, with the ANC-led government perhaps wary of risking its relationship with Cosatu.

Is it worth it?

“We've got anywhere between 500 000 and 600 000 jobs that could be lost. There's significant sectoral variance in the potential job losses, with many of the jobs lost in sectors such as business services, domestic work and agriculture.

“So the real question for me is: Can we find a creative way to set a national wage that recognises it is going to bite some low-wage sectors much more than others?”

“Mining has already seen wages increase, so why mining won't see many losses is because the [proposed] national minimum wage is set at a non-binding level.” The mining sector, a sliver of which is seen here through the lens of a photo exhibition during the Marikana commemorations in 2015, won't be drastically affected by a minimum wage, as strikes such as those that preceded the Marikana massacre in 2012 already saw an above-minimum wage increase in pay for workers.

Could the economy eventually reabsorb workers who lose their jobs?

In a perfect world, a higher minimum wage would mean higher productivity and potentially you could cope with an increase in labour costs, says Bhorat.

“That's an incredibly hard thing to measure. It's an uncertain outcome. We're almost forced into a very defensive position because we've got very high unemployment rates – so an excess supply of labour – and you've got a low-growth environment.

“Labour markets with low unemployment, economies that are growing fast and that are dynamically competitive; this is where those arguments come into play,” says Bhorat. “The national minimum wage is used, if you like, as a mechanism for increasing productivity, for extracting creative value out of labour for the production of goods which then can be exported and it builds on a particular growth path. We're not in that game, unfortunately.”

Brazil is often cited as a poster child for what a national minimum wage can do to boost productivity and increase employment, says Bhorat.

The research shows, however, that a minimum wage played only a minor role in the “Brazilian growth miracle”, he says. “Leave aside the fact that the growth miracle is now over. The massive poverty reductions and stalling of inequality that you saw in Brazil was primarily a function of two things: one is the conditional cash grant system, and improvements in the quality of the education system, which led to an increase in the supply of school graduates.”

That drove down the wage premium, and with more people competing for higher-skilled jobs, inequality went down, and the massively improved quality of the labour supply fuelled growth and created an aggregate demand kick for growing employment, says Bhorat.

“But that's a schooling question. If we could figure out a way to turn around the Grade 12 outcomes – both from the quality of improvement outcome to a labour-market signalling outcome – so you see a greater uptake in the employment of Grade 12 graduates, then that's where you can start.”

These strategies are workable in South Africa, then, if sectors like education come to the party.

“You can find situations where you want to improve the quality of the schooling system precisely so that it acts as a trigger for unlocking this cycle of inequality, because what you're then doing is reducing the wage premium on skilled workers.”

And that's the crux of the argument put forward by Bhorat and his research team.

“For internal labour markets, obviously if you raise the national minimum wage, you're going to reduce wage inequality in a workplace. But it's not clear that for combatting society-wide inequality it's the best or most appropriate instrument in South Africa. One has to take a broader approach and locate the inequality and poverty cycle within all of these contexts.”