Put children on the front page of the future

Throughout its turbulent history, the plight of the country's children has made the front pages. UCT evidence-based advocacy organisation, the Children's Institute, ensures that children's rights have remained in the national conscience.

However, there is much more to be done for the nation's smallest and most vulnerable citizens, said Emeritus Professor Marian Jacobs in her Vice-Chancellor's Open Lecture last night, “Children on the Front Page: A story in words and pictures”.

South Africa's children are still largely absent from key documents such as the National Development Plan, Treasury's budgets and even as the focus of political party manifestos. It's a national shame, said Jacobs. As a group of engaged citizens, the university has a vital role to play in changing this via its research and social responsiveness agendas.

Jacobs' lecture celebrated an important anniversary in this regard: the 10th edition of Child Gauge, which is published annually by the Children's Institute. Jacobs founded the flagship institute in 2001. It has since become a national storehouse as a centre for research and engaged scholarship on the health and rights of children and is especially important as a collection of empirical data that can be publicised in the interest of children's causes. 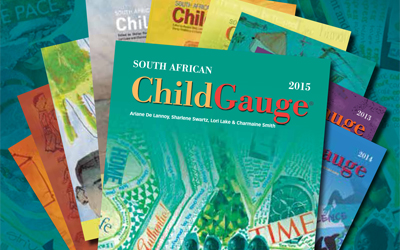 The Children's Institute's annual publication, Child Gauge, has put critical children's issues − health, rights, education, poverty and security − on the front pages for more than 10 years (the 11th edition will be published this year).

These causes take many forms. For example, a recent national study by the Medical Research Council and the Children's Institute at UCT shows that South Africa has one of the world's highest reported homicide rates involving babies, mostly at the hands of their mothers. And in the resurgent gang warfare on the Cape Flats, children are not only being injured or killed in crossfire, but have become targets in revenge attacks, said Jacobs.

“More than ever, children should now be on the front pages of our vision, plans and actions for securing their peace in the future.” As a national asset, UCT has a responsibility to put children on the agenda for research, social responsibility and community engagement, she added.

Her lecture also traced the story of the country's children. This story began with the Taung child, who lived three million years ago, and included those who'd made the front pages at the tail-end of South Africa's history: Krotoa, the child brought to work in Jan van Riebeeck's household; the children who died in concentration camps in the South African War; and the orphans of Oromo – Ethiopian slaves who were freed by a British warship in 1888 off the coast of Yemen and eventually resettled in the care of missionaries in Lovedale in the Eastern Cape. (One of the children, Bisho Jarsa, became the grandmother of the late UCT academic and activist Dr Neville Alexander).

“There are many stories about South Africa's children,” said Jacobs, pointing to the iconic image of Hector Pieterson, dying in the arms of Mbuyisa Makhuba on 16 June 1976. “Many changed the course of South Africa's history; others didn't make the front pages.”

In the 1970s, before the “academic legitimacy of social responsiveness”, universities had responded to issues affecting children through their academic mandates, said Jacobs. However, one development brought children under the spotlight in a powerful way: the Second Carnegie Report on poverty in South Africa. The report was launched in 1982 under the auspices of UCT's Southern African Labour and Development Research Unit, directed by Emeritus Professor Francis Wilson.

The outcome of that inquiry formed the kernel of Wilson and Mamphela Ramphele's book Uprooting Poverty (both authors were in the audience). And the university today could take a leaf from that book in their reponse to children's rights, said Jacobs.

Its lessons remain relevant: understanding the importance of community participation; valuing compassionate, comprehensive, collaborative consultation; recognising that society must prioritise children in the here and now and not as future economic entities; and consulting with those most affected.

“There can be no greater legacy for this institution, which has met the principles and practice of engaged scholarship, than giving dedicated and sustained priority to children.”

But under the mantle of the Constitution, there was a greater challenge, she said.

“That challenge is ensuring that children's rights are not only vested in the state but in all of us: the university, the institutes, the performing arts, the healing arts, the humanities, the hard sciences, civil society and the NGOs …

“In retelling the stories that are part of all our lives, I hope to rekindle memories, refuel interest and provide a reminder that the university is a public institution – a public asset available for the public good.”