A small but rich digital archive on the ‡Khomani San of the southern Kalahari, which includes irreplaceable audio material of the almost-lost N|uu language, has been launched by UCT Libraries Special Collections. It's the most extensive documentation of ‡Khomani San heritage ever undertaken, overcoming even the challenge of years of fragmentation and invisibility.

The ‡Khomani San were the first people of the Kalahari – hunters and gatherers who lived in the vast desert. But in the wake of colonialism and apartheid they were squeezed to the point of disappearing. They lost their land and very nearly their heritage and language. This gradual dispossession culminated in their eviction from the Kalahari Gemsbok National Park (now Kgalagadi Transfrontier Park) in 1970.

But in 1999 things changed. A decade-long land claim led by South African human rights lawyer Roger Chennels ended in victory for the ‡Khomani San. In the process of gathering and documenting the oral histories and genealogies that would link the ‡Khomani San to their land, the team of filmmakers, linguists, cartographers and genealogists found they had assembled a treasure store.

But what to do with this rare repository?

Two years ago the collection was entrusted to UCT for safekeeping and digitisation. The decision followed an agreement between UCT and British anthropologist, writer and filmmaker Dr Hugh Brody, in collaboration with the ‡Khomani San community members and the teams that had worked on the material archive.

Brody holds the Canadian Research Chair in Aboriginal Studies at the University of the Fraser Valley. His series of films, Tracks Across the Sand, which were shot over several years, underpins much of the visual and audio archive.

The archive includes 140 hours of original footage as well as translations, photographs, maps, posters, GIS databases, audiotapes and documents. It also contains oral history transcripts in the three languages spoken by the ‡Khomani San: Afrikaans (the language of the workplace), Khoekhoegowab (the language of the Nama) and their original language, N|uu.

N|uu is a close relative of the now extinct /Xam language recorded by linguists and language curators Wilhelm Bleek and Lucy Lloyd late in the 19th century (the Bleek and Lloyd Archive is also available in Special Collections). Although N|uu was declared extinct in 1974, several N|uu speakers were found living on the edges of the Kgalagadi Transfrontier Park in 1996 and 1997.

Given the value of the N|uu repository, the collection was donated to UCT with funding for a translator to continue and enhance the transcription of the material.

Head of Special Collections Renate Meyer describes the archive as “quite small but very complex”. She said, “It has taken over a year for the first 23 transcriptions to be completed, including numerous collaborations between members of the community and translators to ensure the correct intonations and nuances were described.”

An excerpt from the ‡Khomani San website explains: “… it's incredibly important that this material is heard, correctly translated [referring translations back to the community], showing the complexity of the language so that it can be heard and used for research when there are no original speakers left.”

Researchers from UCT's Centre for African Language Diversity also teamed up with the last trio of surviving N|uu speakers to develop an orthography (conventions for how to write a language) to ensure that the history and heritage don't vanish with the language. 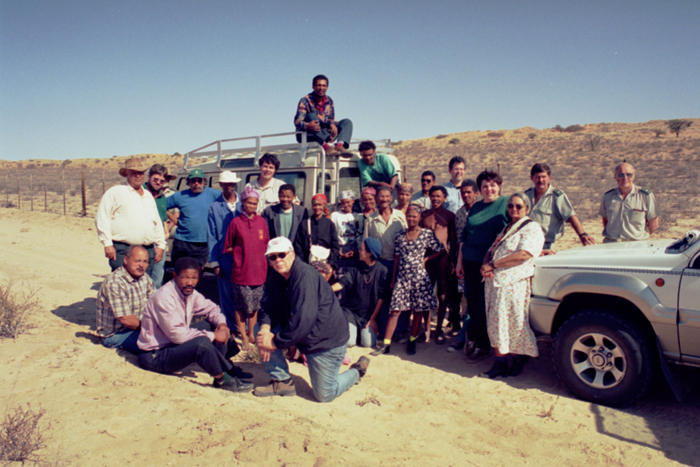 On the road: Researchers and San travelled through the Kgalagadi Transfrontier Park to collect information for the ‡Khomani San land claim.

From memory to map

The mapping process undertaken to identify the extent of the ‡Khomani San's land claim required a very different methodological approach. Oral histories were vital in identifying areas in which people lived, hunted and died. These formed the basis of the GIS database used to integrate information on family trees and the people's links to the landscape.

Meyer explained: “The ‡Khomani San have a historical memory of their land, passed down and recalled over generations (“this tree was aligned to that star”), so the knowledge was embedded in the people, implying their engagement with the land over time.”

The initial methodology for this work came from Brody's experience of Canadian land claims research. He had worked on cultural mapping projects in the Canadian north and was invited to work with alumnus and sociolinguist Dr Nigel Crawhall (Indigenous Peoples of Africa Co-ordinating Committee and the South African San Institute) on this project. The ‡Khomani San website notes: “All the possible features of their tangible and intangible heritage that could be shown were recorded in stories, directly onto map sheets and on film.”

The archive has made “an invisible history visible” and is preserving knowledge for future ‡Khomani San generations. As one elder summed up: “We want our story and our history to be known and shared in the world.”

Although UCT holds the archive in trust, ownership remains with the ‡Khomani San, whose community leaders attended the UCT launch in February. Special Collections is also working with !Khwattu to encourage use of the archive by the interested communities.

But it's not a closed collection. There's a section for public comment and engagement built into the webpages because the archivists are still seeking information: the names of people in old photographs, details of their way of life, and their forgotten stories.