Hidden galaxies: why does the discovery matter?

The recent discovery by astronomers of a supercluster of galaxies hidden behind our Milky Way has sent waves of excitement around the world. To have found the first evidence of galaxies we thought were there but could not see because of the dust of the Milky Way is clearly headline-grabbing – but why does it matter? Its true significance, researchers argue, lies in the fact that the discovery could well test our current model of the universe to its limit.

“This discovery is a step along the way to understanding how the universe works,” says Professor Lister Staveley-Smith, from the University of Western Australia node of the International Centre for Radio Astronomy Research (ICRAR), and lead author on the groundbreaking new paper 'Parkes Hi-Zone of Avoidance Survey' published earlier this month in the Astronomical Journal. “The important thing we need to understand now is how much mass the previously unknown galaxies contain, and whether this is permitted by our current paradigm of the universe.”

The lead authors on the paper, who include (along with Staveley-Smith) two astronomers from South Africa – Professor Renee Kraan-Korteweg, Chair of Astronomy at UCT, and Dr Anja Schröder, from the South African Astronomical Observatory – as well as Professor Patricia Henning from the University of New Mexico, USA, began this research in the 1990s. They sought to better understand the mysterious gravitational anomaly known as the Great Attractor, which pulls thousands of galaxies, including our own Milky Way, towards it at a speed of 2 million kilometres per hour.

Kraan-Korteweg, who has dedicated much of her career to trying to understand these large-scale streaming motions of galaxies – in particular, the ones pointing towards the Milky Way – says there were many hypotheses put forward in the early days; theories about what could cause this movement, including exotic massive particles; or that the universe was slightly different (biased) in this area, and galaxies did not trace mass as they are observed to do in other parts of the universe. “We couldn't understand what was going on, because we knew there was most likely something massive causing these streaming motions; but we couldn't see anything massive there.”

Thanks to their discovery, astronomers now understand that the Great Attractor is caused by the gravitational force of a supercluster of galaxies, of which the core was mostly obscured by our Milky Way. Some components, like the rich Normal cluster, were identified optically and spectroscopically in the mid-90s by Kraan-Korteweg and Professor Patrick Woudt, who was then a PhD student under Kraan-Korteweg's supervision. However, at the lowest Galactic latitude we had no tracers. The new research identified three further galaxy concentrations (named NW1, NW2 and NW3) and two new clusters (CW1 and CW2) that all contribute to the mass overdensity of the Great Attractor.

“The universe contains hundreds and thousands of galaxies, but they are not evenly distributed,” says Kraan-Korteweg. “It is a structure we call a cosmic web, where we see high densities of galaxies in some areas: this creates a clump of mass that attracts other matter through the force of gravity.”

What this means is that while the entire universe is expanding, and moving outwards, there are other variations of movement within the universe caused by the distribution of the galaxies and gravity, which astronomers dub 'cosmic flow fields'.

Finding galaxies with the Parkes Telescope

These new galaxies, located comparatively closely to us at only 250 million light years from Earth, were previously hidden from view by our own galaxy, the Milky Way. “When you look up at the Milky Way, you see all the beautiful stars,” explains Kraan-Korteweg, “but there are not just stars up there; there is also a lot of dust, which obscures any light coming from behind it.”

In the past, astronomers used optical and near-infra-red telescopes to try to study the Great Attractor, but with little luck. It was the use of the CSIRO Parkes Radio Telescope in New South Wales, Australia that allowed this breakthrough. The Parkes Telescope itself has been around for decades, and is very well known. It was built in the 1960s to receive signals from Apollo 11 in the first moon landing, and is the subject of an Australian film titled The Dish, about the telescope's role in that historic event.

“But the key thing about the Parkes Telescope, and in fact any astronomical telescope,” explains Staveley-Smith, “is that they are regularly upgraded with the best equipment.” The critical piece of technology was a 21-centimetre multi-beam receiver fitted to the telescope: “That receiver is so advanced that it is still the primary instrument being used on the telescope even today, years later.”

This multi-beam receiver allowed the researchers not only to scan the skies 13 times faster (because of the multi-beam technology), but also to use the very long radio waves to cut right through the miniscule dust particles obscuring the view.

“A good comparison is the way the human eye can't see through smoke, but we have no problems telephoning through even heavy pollution,” explains Schröder. 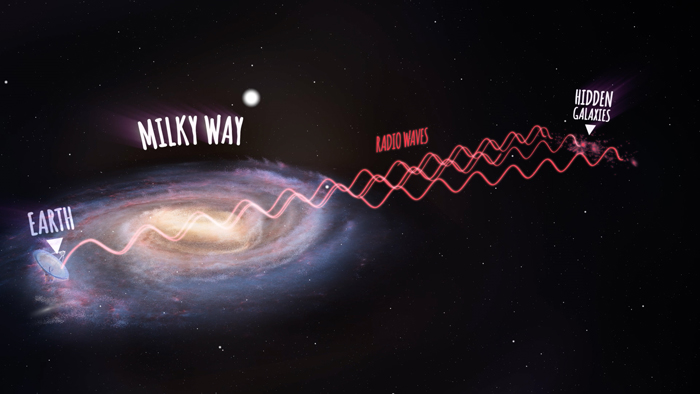 An artist's impression showing radio waves travelling from the new galaxies, then passing through the Milky Way and arriving at the Parkes Radio Telescope on Earth (not to scale).

The radio telescope, unlike the optical or near-infra-red telescopes, does not help astronomers see a picture of the universe; rather, it measures the emissions of gas from other galaxies. “Galaxies tend to contain a lot of hydrogen, and the hydrogen atom emits radiation,” says Kraan-Korteweg. “It is this radiation that we pick up with the 21-centimetre receiver. Henning adds: ”We have known since the 1980s that it would be possible to use this 21-centimetre emission to map optically hidden galaxies, but those early studies were able to find only a few tens of galaxies. Now we can find hundreds – and soon, thousands more.”

But not all galaxies contain enough gas to be picked up by the radio telescopes. Some contain more stars than gas, which implies that there may be even more galaxies in this area than we are able to see.

“In the beginning, the universe was made up of only gas and dark matter,” says Staveley-Smith. “But over the course of time, gas collapsed into stars; some of those stars have since exploded and returned some of the gas to space, but in general the 'older' galaxies will have used up most of the gas, and contain mostly stars, black holes and dark matter. Other 'younger' galaxies like the Milky Way still contain lots of gas; and some of the very little galaxies contain as much gas as they do stars.”

Describing galaxies as 'young' and 'old' is useful to differentiate between the galaxies, but it's a bit of a misnomer, says Schröder: in fact, “everything in the universe is 13.7 billion years old. The difference is that some galaxies have been more efficient in using up their gas than others.”

While this breakthrough does go a long way towards answering questions that astronomers have been asking since the 1970s, it is most probably only a taste of what is to come when the Square Kilometre Array, the world's largest radio telescope, comes online in the next few years. “This project can be regarded as a pilot project to the kind of projects we will be starting in the next two years with the SKA Pathfinders,” says Kraan-Korteweg. “They are likely to produce data of a depth and sensitivity that will outpace the findings of this study by two orders of magnitude.”

According to Staveley-Smith, the findings of this study – and possibly, of studies to come – may send us back to the drawing board when it comes to our current theories of the universe, including the theory of general relativity. “Our current models of the universe do not predict the very large galaxy masses on the scale we are seeing here,” he says. “Future discoveries may well prove that mass overdensities such as the Great Attractor, or larger, cannot easily be reconciled with the current cosmological models.”

Animation showing hidden galaxies discovered in the 'Zone of Avoidance' from ICRAR on Vimeo.