Every day, between 10 and 30 bodies arrive at the Salt River forensic pathology lab, one of the two main mortuaries in Cape Town. In many cases the identities of the corpses are unknown; and sadly, often they remain that way. One of the main reasons for this is that local forensic anthropologists do not have sufficient information on how local conditions affect the decomposition of bodies. This is particularly problematic in pinning down the time of death, which is used to narrow the window in which the police can search the missing persons database for a possible identity.

Belinda Speed and Devin Finaughty, two PhD researchers specialising in forensic anthropology, want to change that. Through their research they hope to provide comparative data – for instance, between different geographic and climatic zones – that can be used by local forensic anthropologists to help identify bodies and provide sound evidence in court cases. But, while they have similar aims, their research takes very different forms: Speed is studying how bodies decompose at sea, while Finaughty focuses on how bodies decompose on land, in the Western Cape climate. Both use pig carcasses as a substitute for human bodies (and readers with sensitive stomachs should read further with care).

Why pigs? “South African legislation does not currently allow for donated human bodies to be used for this kind of research,” explains Finaughty. “Until this changes, pigs are the only acceptable replacement – but luckily, they do quite well.” There is a large body of literature that supports the use of pig carcasses as analogues for human bodies, he says, because of many similarities, such as skin-to-hair ratios, relative organ sizes, amounts of subcutaneous fat, and most importantly, their digestive bacteria (a major internal driver of decomposition).

The use of pig carcasses, therefore, has become common practice for forensic anthropologists; however, Finaughty and Speed were required to undergo a rigorous process of ethics approval for their research.

What is forensic anthropology?

“The difference between forensic pathology and anthropology is really about the point at which we play a role in a forensic death investigation,” explains Finaughty. “Forensic pathologists are medical doctors who deal with the remains of those who are recently deceased. They work with soft tissue, and have jurisdiction over the body and all evidence on, in and under the body at a crime scene,” he says. Their mandate is to establish cause and manner of death, where possible.

Forensic anthropologists, on the other hand, deal with bodies that have already decomposed or are otherwise unrecognisable. Their job is to create a biological profile of the individual (based most often on skeletal remains) that includes estimates of their sex, age, biological origin and any other uniquely identifying characteristics (broken bones, dental histories or disease markers), which may assist forensic pathologists and detectives with identification of the deceased.

On land: “Local climate has a huge impact on body decomposition.”

Finaughty did not always want to be a forensic anthropologist. As a child he wanted to become a herpetologist, or a volcanologist; but after stumbling over the area of study during his second year of a BSc at UCT, he knew he had discovered his future career.

Today he is working on completing a PhD on rates of decomposition in two terrestrial environments on the Cape Flats. “I am studying the ways in which bodies decompose in the Cape Flats Dune Strandveld, and in thickets of the fast-growing invasive tree, Port Jackson (Acacia saligna),” he explains.

How does he do this? Every day he visits his two research sites, where he has placed pig carcasses in large metal cages, and records the changes he observes.

“Decomposition happens in overlapping stages,” he says, “The carcass progresses from fresh to bloat, followed by the moist stage, later the advanced stage, and finally, skeletonisation.”

At each of these stages there are many factors that need to be taken into account, from climatic conditions at the time to the activity of specific bacteria, insects, and even larger scavengers, such as mongoose. “Understanding the impact of the weather is very important,” says Finaughty “I have a full weather station at each of my sites to record temperature variations, humidity, rainfall, wind, and even the amount of sunlight that area is receiving.”

The climate of the Western Cape can have some very specific effects on dead bodies. According to Finaughty, it is not unusual for forensic anthropologists to come across mummified remains. “This is often the result of heatwaves in summer, which arrest the development of maggots and flies and then desiccate the flesh of a decomposing body, to create a mummy effect. This can happen within two weeks of death,” he says. 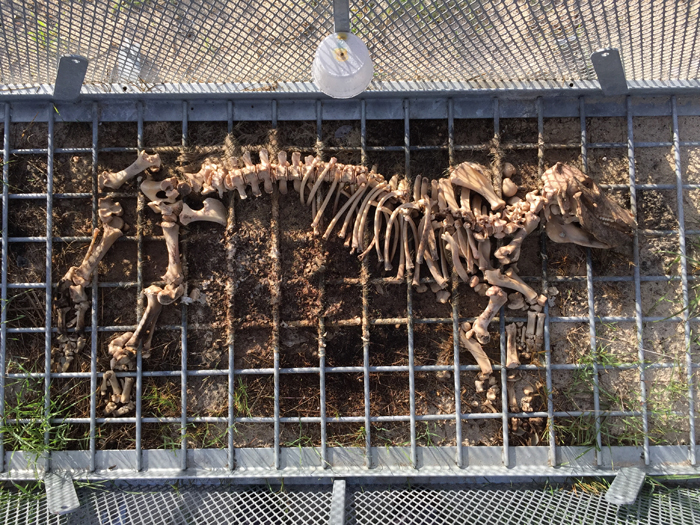 The 'skeletonisation' stage is complete.

By sea: “We know very little about how bodies decompose in the ocean.”

Every year, an average of a dozen bodies (or parts of bodies) wash up along the Western Cape coastline; but according to Speed, there is still little understanding of where the bodies may have come from, or how long they may have been at sea. “Last week, two bodies – or at least, one body and a foot – washed ashore on the same day.” she says. “But that is a rarity. In fact, that is one of the reasons I am so interested in doing this research, because so little data exists.”

It took Speed almost a year to get the necessary permissions, equipment and funding that she needed to start her research – not surprising, perhaps, since her research takes place under water. “Right now I have one 120kg stainless steel cage at the bottom of the sea – 16m below sea level – with a dead pig in it,” she explains. “Thanks to the UCT research divers I am working on a second, but it's tricky because it needs to be bolted into the sea floor. There are also factors like wind, rain and swell to contend with. It is an expensive and resource-intensive project.”

So it is perhaps unsurprising that Speed is one of only about five people researching underwater decomposition around the world.

Speed has a camera attached to each cage that takes photos of the pig carcass every 15 minutes, so that she can track the rate of decomposition of the body, and any interesting animal activity. 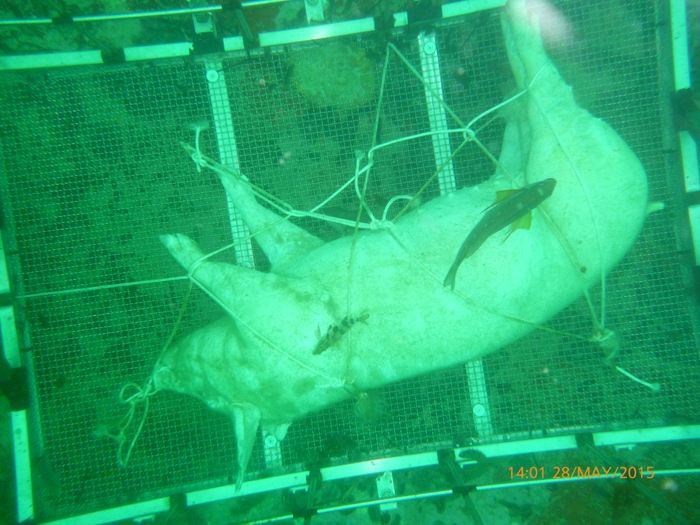 The waiting game: it can take two weeks for visible decomposition to start.

When Speed started her research, she placed the first pig carcass underwater and watched and waited. “For the first two weeks, nothing seemed to happen at all, and I was quite worried. But after that the rate of decomposition was faster – once the skin had softened, and the fish had access to the carcass.”

Even under water, there is geographic variation. Speed had to wait for the skin to decompose so the fish could eat the underlying soft tissue. “But compared to the Canadian research on which my project is based,” she says, “my rate of decomposition is extremely slow. This is mainly because the carcass I was dealing with was not visited by crabs or crayfish, which act to open up the skin and expose the softer flesh for the fish to eat.

“Although it's too early to tell, it does seem that one difference between land and sea may be that the rate of decomposition is less predictable at sea,” she says.

Another difference is the type of animal activity that affects the bodies. Speed says that often bodies that have been in the water for more than a couple of days are unrecognisable, because the skull is exposed first. Sometimes, however, in cases where the bodies are recovered quickly, the face remains very well preserved, while major muscle groups are missing due to larger scavengers like sharks.

“When I was younger I liked to read books about solving crimes, from Tintin to Nancy Drew, and those choose-your–own-adventure books,” says Speed. “Now I feel like I am still doing that to some extent, because when it comes to forensic anthropology, you have to use a process of exclusion rather than inclusion. Often, you can be sure that something is 'not', rather than that it 'is'. Any information I can gather about how bodies decompose in an ocean environment could prove useful, both when it comes to identifying bodies and in helping to provide evidence in criminal cases.”

The information we get from decomposition studies, explains Speed, allows us to track how a body decomposes when certain variables are known – such as water temperature, currents, salt and oxygen content, and animal activity. “So when a body washes up on shore, we can use the information from the environment in which the body was discovered to estimate a post-mortem interval (time since death).”

This information, along with a full forensic anthropological assessment (such as age and sex) of the remains, is given to the investigating officer, who can search through missing-persons records to see if anyone fits the profile provided. If there is a possible match to the deceased, DNA can be compared to that of the next-of-kin of the missing person, hopefully resulting in a positive identification. “DNA is your best bet for identification,” says Speed. ”The anthropological profile is merely a link in the chain, but it is a very useful starting point. It is only as useful as the data we have to work with, which is why local data are so important.”

Why do they do it?

Before starting her research for her PhD, Speed worked full-time as manager of the forensic anthropology laboratory at UCT. It was this experience that led her to focus on her specific area of research. “Every time we did a case, the pathologist would ask us how long the person had been dead,” she says, “and we would only be able to give a general answer – like saying, 'well, post-mortem interval is between six months to a year'. This is essential information, and it influences everything from suspected perpetrators and their alibis to identifying the remains of a deceased individual. It's not okay that we can't be more precise.

“Our research is funded by the National Research Foundation, and we are very grateful to them, but generally this is an area of study that is not well funded,” continues Speed. “Ideally, I think every large mortuary or cluster of mortuaries should have its own in-house anthropologist. At this point that may not be feasible, but I think it would be very valuable if the private and public sectors could help support research into this area, more than is currently being done. The work we do is essential.”

Finaughty agrees: “Every body that we study is someone's child, sister, brother, mother or father. I think there's a moral imperative to try and provide answers when someone has died unnaturally. If bodies are not claimed and remain unidentified, and the docket on them is finalised, they are cremated, without anyone knowing their names. People matter, and no-one deserves to die in obscurity. We work to give these people their identities back, helping to restore their dignity and facilitate the processes of social and criminal justice.”