Planting the seeds for a more sustainable city

City officials are sometimes so close to what they're doing, they can't see the wood for the trees, while academics work in a theoretical world where it is easy to lose sight of the practicalities on the ground.

Yet both have valuable insights into the problems facing our cities – in particular the hot button issue of sustainability.

To bridge the divide between the academy and practice, four UCT researchers have spent the last three years (from 2012 to 2015) 'embedded' within city council departments to observe how policy is being developed and implemented. The projects they worked on looked at the space economy, climate change adaptation, energy governance and the green economy.

During a discussion at a final workshop to wrap up the project, the four reflected on their experiences – not least the way in which they had built relationships and a level of trust that would last well beyond the project's lifespan.

Robert McGaffin, who focused on the city's space economy within the Spatial Planning and Urban Development Department, shared how academics and officials brought differing yet valid viewpoints to policy research. The city officials were closer to the ground and understood what the priorities were, while academics could help define the problem to reach a better understanding of the underlying causes, he noted.

"Cities are at the coalface. They ... need answers to things, and they need (them) now. That's why partnering in this way makes the whole process a lot more relevant."

He stressed that it was essential to understand context. "It is really useful to be with the city counterpart to say: How do I take this through the system? It is very difficult to do that when sitting on upper campus somewhere." 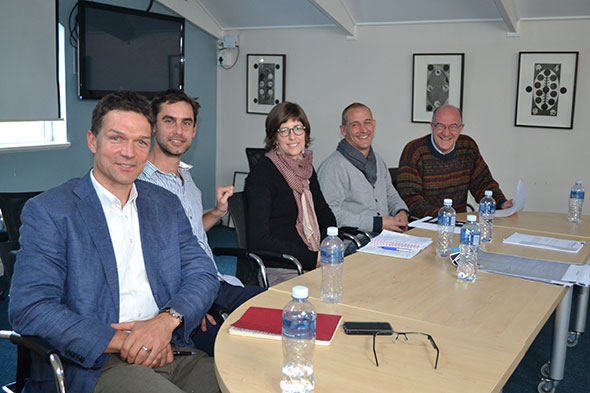 Anna Taylor, who looked at climate-related risks in the Environmental Resource Management Department and the Stormwater Sustainability Branch, said the 'embedded' model of research had helped to break down some of the organisational, disciplinary and departmental silos that typically existed.

"The conversations that (we) had definitely hugely enriched my understanding of some of these policy and academic ideas by suddenly seeing them through different lenses."

She said changing a city's sustainability trajectory was "a very slow process", but the hopeful part was that perhaps they had planted some seeds, and the relationships that had been formed might be the fertile soil that would allow them to grow.

Saul Roux, whose focus was on urban energy governance, worked in the Energy and Climate Change Unit looking at a more sustainable energy system. He said one of the benefits of the project was that value was added by sharing research interests across different disciplines.

"The questions you asked changed consistently throughout the process," he said.

Anton Cartwright, whose project focused on the green economy, said the ideas he worked with throughout the three years were ways the green economy could be linked to economic theory and then translated into budget.

He and his city colleagues had looked at the issue of 'unemployability' – referring to the estimated 400 000 people in the city unable to find jobs.

They had sought to disrupt the notion that the natural environment was a "luxury good" and showed that it could be used to provide work for people who did not easily fit into the city's labour market.