Why bats 'speak' in different accents

New research by UCT's very own BatGirl into the communication and navigation system of bats explores the reasons they have developed different echolocation frequencies. Her findings suggest new ways to investigate the traits important for survival in any species.

Bats are famously the only mammals capable of true powered flight. They are also well known for their unusual method of communicating using sound, and provide invaluable services to natural ecosystems and human economies (for instance, they eat pests that destroy crops). Yet they have also suffered from an undeserved reputation as pests themselves, and studies into bats only took off in the 1950s.

Even doctoral graduate Lizelle Odendaal thought bats were 'scary' until a fieldtrip in the third year of her BSc. "It was the first time that I'd worked with such charismatic creatures, and I fell in love," says Odendaal, whose family affectionately call her 'BatGirl'.

It was then that she decided to make bats the focus of her PhD thesis ('The evolution of sensory diversification in the Cape horseshoe bat, Rhinolophus capensis'). 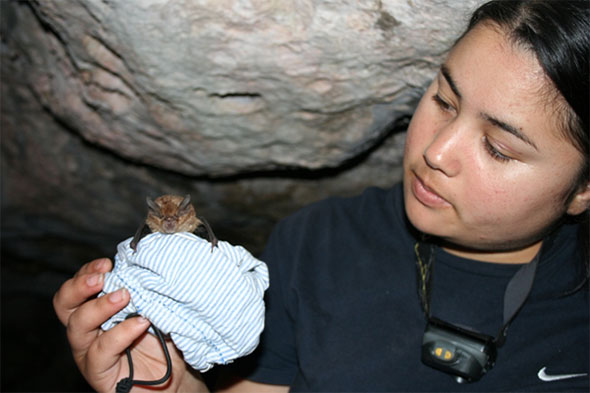 Lizelle Odendaal became nocturnal herself, getting to know the mines and caves in which the bats lived.

Odendaal spent years studying the Cape horseshoe bat, so named because of the characteristic horseshoe-shaped flap of skin surrounding their nostrils. She travelled to various sites along the southern African coast, becoming nocturnal herself to match their rhythms, getting to know the mines and caves the bats called home, in order to capture and take samples of the bats for the study.

Odendaal was especially interested in better understanding bats' ability to navigate by sound. Echolocation – the name of their sophisticated system – is a biological acoustic imaging system; bats (and other mammals, such as dolphins and whales) emit a call, and then listen to the echoes of their call bouncing off objects in their path, to gather information about their surroundings.

Bats analyse the tiny spectral and temporal differences between what they 'say' and what they hear to perceive their environment. Echolocation is therefore an important adaptive trait (a trait that plays a major role in survival), says Odendaal, because most bats use echolocation to navigate, orientate, and detect prey (most bats eat insects, but others hunt small vertebrates, including fish), as well as to communicate with one another in complete darkness. 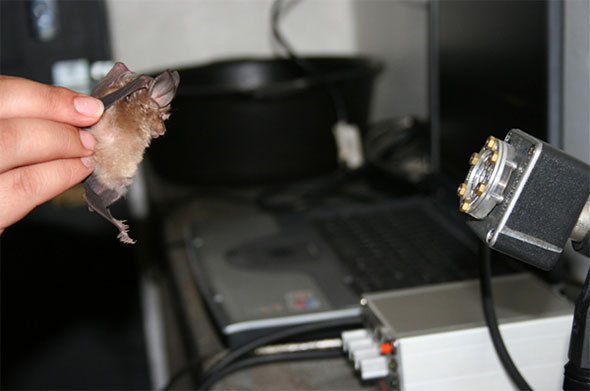 Recording the echolocation calls of the Cape horseshoe bat.

But because echolocation is so important for a variety of different things, having slightly different accents has major implications for how they perceive their world.

"I wanted to know what the causes and consequences were of the evolution of different echolocation frequencies among these populations. Specifically, I was asking: do these different accents evolve by chance, or are they functionally significant?"

Unlike most research, which usually looks at only one source to figure out a trait, Odendaal used a holistic approach combining ecological, morphological (the form and structure of organisms) and DNA data to try to understand how different evolutionary processes interact to shape the patterns of echolocation variation that she had uncovered.

She used the data to tease out the nuances of the adaptive trait variation. Her findings are applicable not only to people interested in bats or echolocation, but also to anyone interested in understanding the evolution of any trait that is important for an organism's survival, such as birdsong, behaviour, and colour pattern.

"I used body-size data, 3D micro-CT scans of bat skulls, mitochondrial DNA (DNA that is only inherited from mothers) and the DNA sequences of prestin, the 'hearing gene'." (As the name suggests, the hearing gene has been found to be very important for high-frequency hearing in all mammals, including humans, and especially in echolocating animals such as bats).

"I also found that the size of the skull features that are important for echolocation (the nasal cavity) correlated with the frequency and habitat differences between populations. This led me to believe that selection for certain frequencies to match the different habitats could be the main factor that drives echolocation variation within the species." 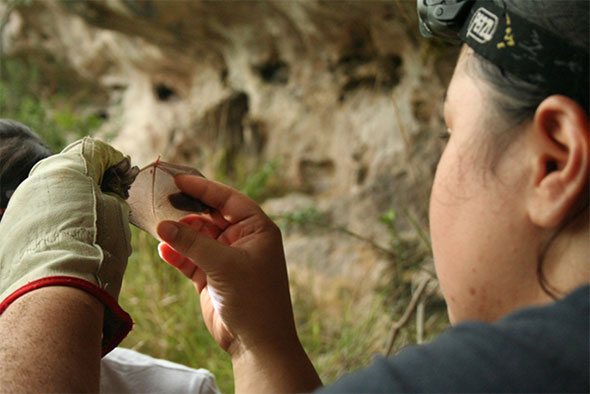 Determining the age of a bat.

However, the mitochondrial DNA data revealed that while populations of Cape horseshoe bats may have different echolocation frequencies, genetically they are very similar. This suggests that there is a lot of dispersal, and therefore 'gene flow', between populations. Only the populations at the extreme ends of their distribution were genetically different from all other populations.

"This means that either selection for echolocation frequencies still happens despite gene flow, or echolocation in horseshoe bats is far more flexible or 'plastic' than most people assume," says Odendaal. "In horseshoe bats in particular, there is a tight link between the frequency they call at and the frequency they hear best; therefore, if selection was important, I would have expected the hearing gene prestin to be different among populations as well. However, this was not the case. In fact, there were no differences in prestin between populations at all, whichever echolocation frequencies they used."

Odendaal concludes, therefore, that while selection may be the dominant driver of echolocation variation in some populations (such as the population situated in the extreme environment of the desert), in others, flexibility in echolocation frequencies may be more common.

During her study on bats, she found that they "have personalities, and such character – they certainly don't deserve the bad reputation they have sometimes been saddled with".

Odendaal is planning to pursue a postdoctoral fellowship overseas; but she will be back.

She is the first person in her family to follow a career in academia. "I'm sure my family thinks I'm very strange to study something as weird as bats, but they see how happy it makes me, and are very proud and supportive," she says.

As Batgirl often says in the comics, "It is only the end if you want it to be"; it seems this is only the beginning for this real-life Batgirl.

Interested in more UCT research about bats? Read about the evolutionary arms race between bats and moths in The Conversation.