After two years of negotiation between scientists and government ministers, the polar research vessel SA Agulhas II is heading into the Southern Ocean where a UCT oceanography team has some unfinished business.

"This is a huge day for us," Ansorge said just before embarking at Cape Town.

The associate professor (also attached to the Marine Research Institute at UCT) is a veteran of Southern Ocean voyages and knows well what to expect at 57°S, where the sea ice currently begins – a turbulent, wintry ocean, with temperatures of around -20°C.

Ansorge calls it a "baptism of ice" for her accompanying five MSc students. They're part of a 50-strong team of local and international scientists onboard the Agulhas.

The cruise is significant for two reasons, says Ansorge.

Until now, all scientific voyages have piggy-backed on the DEA logistic voyages to Gough Island and the South African National Antarctic Exhibition (SANAE) base, resulting in limited science time – and opportunities for scientists and their students to get berths.

Second, the project is part of an international scientific programme to boost data collection in the South Atlantic. 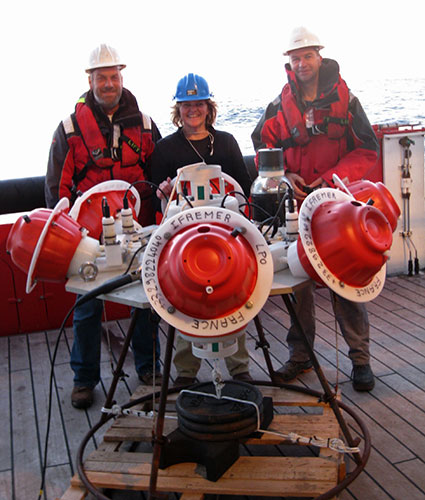 Gathering data: UCT's Assoc Prof Dr Isabelle Ansorge, with chief scientist Marcel van den Berg, and French technician Michel Hamon on board the SA Agulhas in 2013, about to deploy a Current Pressure Inverted Echo-Sounder into the South Atlantic. Moorings like these are vital data collectors, allowing scientists to monitor changes to the world's oceans.

During logistics voyages to Gough and SANAE in 2013 and 2014, Ansorge and her team deployed moorings to collect the data needed to monitor the Meridional Overturning Circulation (MOC), a system of surface and deep ocean currents that extends across the globe.

This system is the main pathway for the large-scale circulation of heat, salt and carbon dioxide from the tropics polewards.

The moorings have hourly records of temperature, salinity and current flow – physical variables essential if oceanographers are to understand the role changes in the volume of warm salty Indian ocean water may have on the Atlantic, and further afield.

"Climate models have predicted that increased levels of greenhouse gases may be interfering with this process by slowing down the circulation in the North Atlantic – the northern limb of the MOC."

For the first time, the moorings will provide a high-resolution dataset of the ocean flow south of Africa.

"But we have no idea what the data will show until each mooring is retrieved from the sea floor – up to 5 km down!" said Ansorge.

Once retrieved, the data will be downloaded and the instrument refurbished and redeployed to continue with their time series. 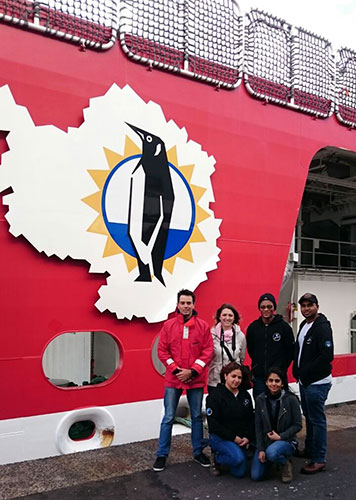 Home from home: The MSc oceanography class of 2015 gets acquainted with the polar vessel, the SA Agulhas II, their home in the wintry Southern Ocean over the next four weeks. In picture are (back from left), Marc de Vos, Katherine Moffett (CPUT), Tharone Rapeti and Ramontsheng Rapolaki. (Front) Tania Williams and Khushboo Jhugroo.

Ansorge is the principal investigator of South Atlantic Meridional Overturning Circulation SA (SAMOC-SA), an initiative she leads with Professor Sabrina Speich of the University of Brest in France.

"There's growing recognition of the intimate link between the North and South Atlantic basins and the critical need to study the full ocean water column on a more regular and long-term basis. This cruise will insert a large piece into that jigsaw puzzle – and is a first for South Africa and UCT."

They're also trying to better understand the role seasonality has on the Southern Ocean's biological productivity, its ability to take up atmospheric carbon dioxide, and how the ocean's physical structure varies between winter and summer.

As part of their training the five MSc students onboard will gain hands-on experience in retrieving moorings, downloading data and trying to make sense of how the oceans south of Africa are responding to changes in ocean circulation.

"There's certainly no time to be sea-sick on this voyage," said Ansorge. "Very few students in the world have such an amazing opportunity to gain this form of experience."

While the new polar research vessel is an enviable resource, there is a danger of it becoming a white elephant, says Ansorge. In 2013 the scientific community published a paper (Treasure et al, 2013 South African research in the Southern Ocean: New opportunities but serious challenges) in the South African Journal of Science questioning the lack of planning and funding for it.

"This [voyage] is fantastic for the scientific community," said Ansorge of the voyage. "It means that we got sufficient berths to take a large research group, including students, and finally we get to spend the entire voyage undertaking key scientific questions rather than hanging around for the logistics to be completed."