The ceremony, for graduates of the law and commerce faculties, kicked off UCT's two-day mid-year graduation season.

In his opening address, Vice-Chancellor Dr Max Price said: "We have seldom had in one graduation three such distinguished figures receiving their honorary degrees as they are today, and I want to signal to the rest of the graduates and their parents and families what a privilege it is to be sharing the graduation ceremony with these honorary graduands."

Price said that while each was being honoured for their individual achievements and contribution, the choice of honorary graduates reflected the university's values.

"It's an attempt to signal to the rest of the students graduating here the values that we hold dear and the values we espouse, particularly during troubled times when sometimes there are threats to those values and to the Constitution."

He reminded students that good citizenship is part of a good education.

Altogether 1 250 students, including approximately 70 PhDs and more than 500 master's students, will graduate over the two days. 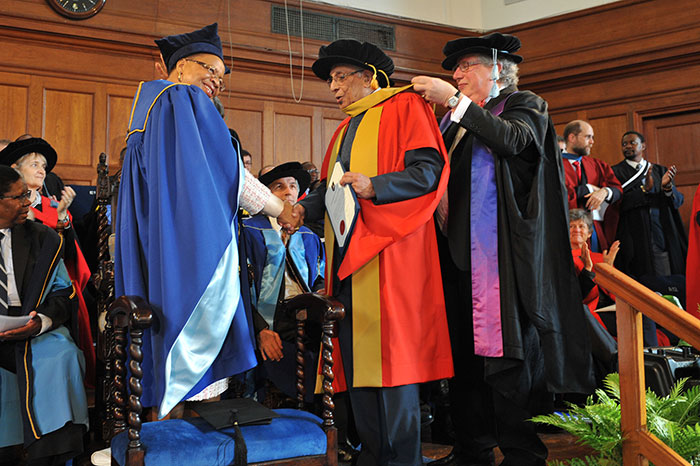 An honorary doctorate was awarded to political activist Ahmed Kathrada, a veteran of South Africa's liberation struggle. In the picture he is hooded by Registrar Hugh Amoore and congratulated by Chancellor Graça Machel.

"Ahmed Mohammed Kathrada – Kathy, as he is more popularly and affectionately known – ... left in his final year of school to become a full-time political activist. He finished his matric through part-time study and, but for a brief spell at Wits University, did not return to formal tertiary study until he was on Robben Island. But education has always being a critically important part of his life. He teases that he was probably one of the earliest proponents of the misguided doctrine of 'liberation before education' for dropping out of his formal studies to become a full-time political activist. If there is one thing in his life that he would do differently if he had the chance, he often tells the youth, is combine his activism with pursuing his studies. They are not mutually exclusive. If anything, they complement each other." 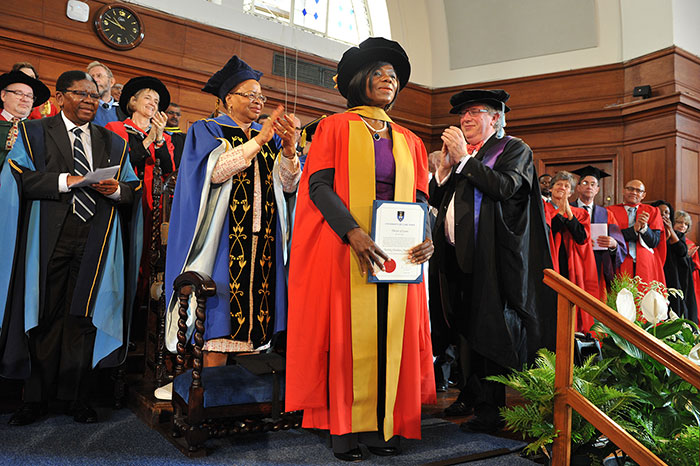 Thuli Madonsela's oration was delivered by Professor Hugh Corder of the Faculty of Law.

"She started her professional career at CALS [the Centre for Applied Legal Studies at Wits University] as a junior research officer in the early 1990s. CALS at that time housed strong-minded and strong-willed people like Edwin Cameron, Halton Cheadle, Fink Haysom and Paul Benjamin ... Thuli was never one to defer to these senior people. In short, she has always been her own person – even then it was clear that if she felt that she had a worked out position she did not defer to authority, but only to a better argument." Judge Dennis Davis on Thuli Madonsela, referenced by Prof Hugh Corder 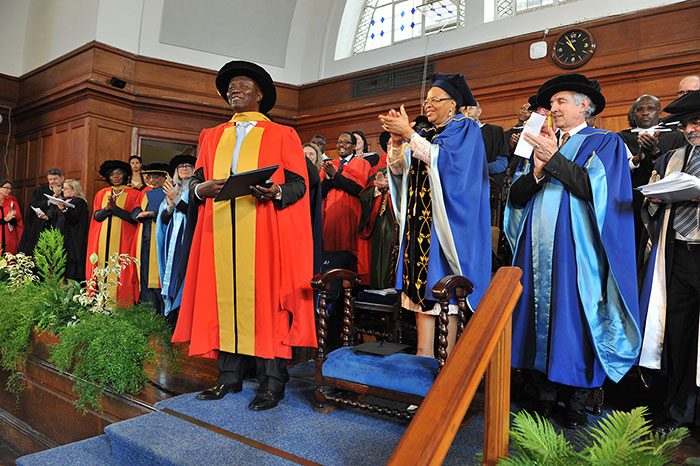 A third honorary doctorate was conferred on Justice Dikgang Moseneke, Deputy Chief Justice of the Constitutional Court of South Africa. He is being applauded by Chancellor Graça Machel and Vice-Chancellor Dr Max Price.

"My first encounter with Dikgang was on Robben Island. He was one of a group of students from Pretoria who joined the liberation struggle after the Sharpeville massacre who were sentenced to long imprisonment. Dikgang himself had been sentenced to ten years. The seventeen-year-old Dikgang was the youngest inmate at the time. Like many of us he had to 'val in, stap uit, quarry to'. Warders could not pronounce his name; they pronounced it in Afrikaans as 'Dik gang' – a wide passage." Archbishop Njongonkulu Ndungane

In addition, this morning's ceremony also marked the award (in absentia) of a Meritorious Book Award to the law faculty's Professor Hanri Mostert for her work Mineral Law: Principles and policy in perspective. Read more.

Story by Helen Swingler. Images by Je'nine May and Michael Hammond.