Understanding avian adaptation to climate change, why the African oystercatcher is no longer a threatened species, and the discovery of a new breeding ground for blue petrels – all of this is covered in a special edition of Ostrich: Journal of African Ornithology, published to commemorate the life and work of the late director of UCT's Percy FitzPatrick Institute of African Ornithology, Professor Phillip Hockey.

Hockey's contribution to the field of ornithology was made evident by the flood of submissions to Dr Rob Little, Percy FitzPatrick Institute Centre of Excellence manager and guest editor of the special issue. Twenty papers for the special edition were submitted, of which 12 include Hockey as a co-author and 17 originate from the FitzPatrick Institute.

"This special edition is a remarkable, possibly record-breaking, exposure of UCT science," says Little. "I found it a pleasure and an honour to work with the variety of contributing authors to put together this special edition, which is such a worthy tribute to Phil's life's work."

Hockey passed away in January 2013 from cancer. He was remembered not only as a "gifted and passionate ornithologist" by BirdLife South Africa CEO Mark Anderson, but also as a "guru, kind father-figure, field supervisor and teacher" by UCT Vice-Chancellor Dr Max Price.

Below are some insights from the special edition of Ostrich: 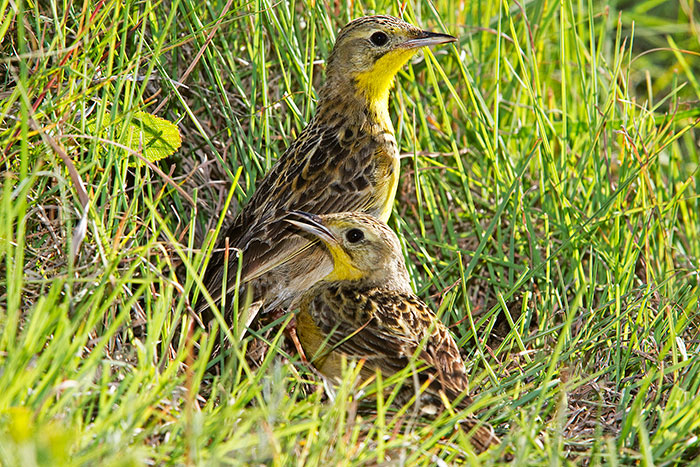 Protected conservation areas are critical for the survival of not only terrestrial mammals, but also birds, particularly grassland-breeding bird species that build their nests on the ground. A study led by Dr Ian Little (a FitzPatrick Institute graduate) showed that grassland-breeding birds living in unconserved areas rarely produce enough offspring to maintain the population.

Oystercatcher populations are on the rise 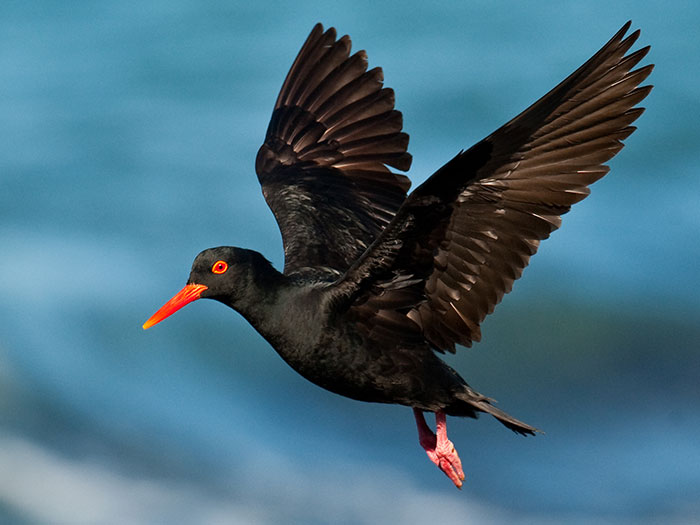 The African black oystercatcher, a resident of the coasts and islands of southern Africa, is thriving, and may soon be classified as a bird of 'least concern' by the International Union for Conservation of Nature and Natural Resources (IUCN). The African black oystercatcher was classified as 'near-threatened' in the early 1980s, but a recent study led by the late Dr Douglas Loewenthal of UCT's FitzPatrick Institute found that the species' global population is on the rise. The authors say although human activity has increased in many parts of the birds' breeding range, oystercatchers are probably benefiting from an increase in the extent of marine protected areas. A separate study, also published in the special edition, revealed changes in the egg-laying patterns of the oystercatcher. These birds are known to lay clutches of two eggs usually, and only very rarely three. But a recent review of over 4 000 nest records, dating back to the early 1960s, has shown an increasing frequency of three-egg clutches. This phenomenon occurs only at particular sites, and only early in the breeding season. 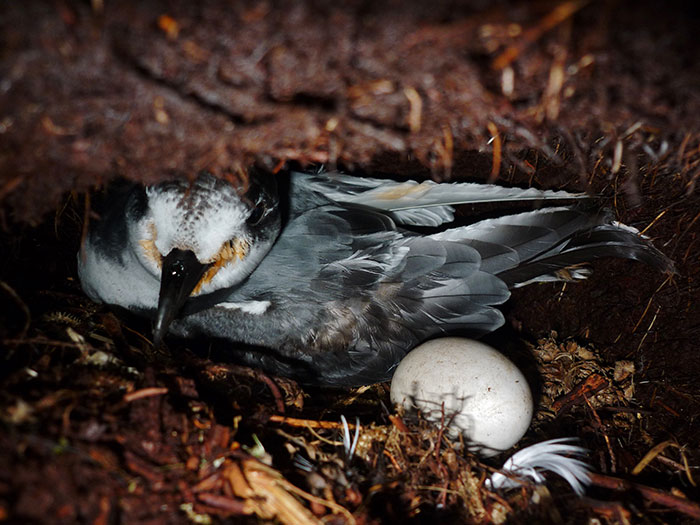 A new colony of blue petrels has been discovered on Gough Island in the central South Atlantic Ocean – more than 700 kilometres north of the petrels' known breeding range. Prior to this discovery the petrel was believed to breed on the islands off the coast of southern Chile, on either side of the Antarctic Polar Front.

How will birds adapt to climate change? 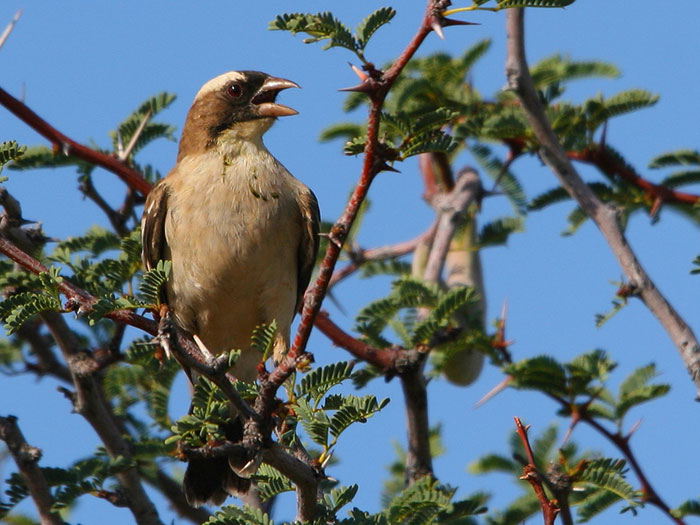 White-browed sparrow-weaver panting in the heat of the Kalahari. Photo by Ben Smit.

The effects of climate change will be felt not only by humans, but across the animal kingdom. Animals, including birds, can and will adjust their behaviour and physiology in response to these changes. Understanding how species respond to high temperatures and other climate shifts is key to predicting the impact of climate change on animal populations. Two papers in the special edition address adaptation to climate change by birds. A study of behavioural patterns of birds in the southern Kalahari, led by Dr Rowan Martin of the FitzPatrick Institute, revealed that birds – much like humans – seek the shade of dense trees in extreme heat. Meanwhile, across the world, Emily Edwards of the University of Western Australia led a study on the foraging behaviour of the Western Australian magpie in high temperatures. She found rising temperatures had a strong impact on the birds' behaviour. The higher the temperature, the less likely magpies are to forage for food.

The fork-tailed drongo is under siege 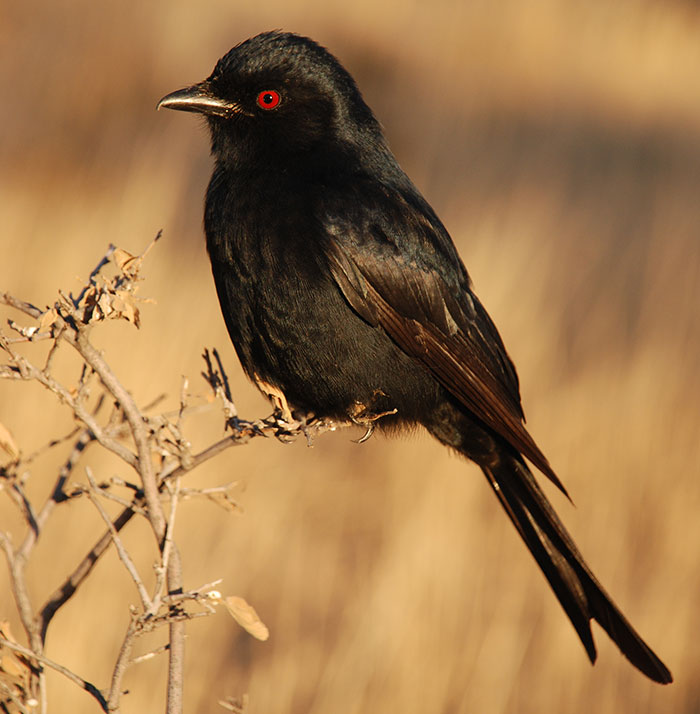 While it is generally uncommon for different parasitic birds (birds that lay their eggs in other birds' nests) to target the same host, there are a few rare exceptions. One of these is the fork-tailed drongo of the southern Kalahari. A study led by Dr Tom Flower, honorary research associate at the FitzPatrick Institute, found the drongo is targeted by both the African cuckoo and the Jacobin cuckoo. In fact, the drongo is the only known host for the African Cuckoo.