In the run-up to the June 2015 graduation, we profile some of the research done by PhD graduates from December 2014. Meet Danielle Smith, whose doctoral research in human genetics focused on a heritable neurodegenerative disease that afflicts a number of South Africans, and often leads to people being wheelchair-bound and unable to see: Spinocerebellar ataxia type 7 (SCA7).

"The Spinocerebellar ataxias are not well known, even amongst the medical community, because they are relatively rare. However, we have shown that South Africa has a considerable number of patients and families with SCA, and I believe they deserve to be helped," says Smith.

The disease manifests mainly when patients are in their 40s and 50s.

"Younger patients usually develop eye problems at first. They often have problems with walking, swallowing and eating. The disease usually progresses to death within 10 years." 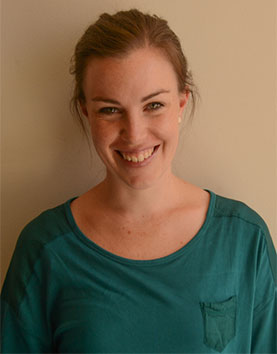 Smith says it's critical to raise awareness of the condition so that people can be referred for molecular testing.

"Overall, we hope that this body of work will have a significant impact on the lives of many African patients with ataxis, since they will receive a molecular diagnosis for their condition, allowing for better healthcare management, planning and future treatment.

"It's a tragic disease and it's important for patients and their families to be counselled and warned of the risks for current and future offspring."

Smith says it's also important to nurture relationships with neurologists from neighbouring African countries to determine the prevalence of people affected by SCA7 in sub-Saharan Africa. South Africa is the only country in Africa to have undertaken research on SCAs.

There is currently no cure for SCA7, although clinical trials are on the horizon.

Smith's research also focused on the optimisation and implementation of an improved molecular diagnostic test for SCA7. As a result of her research, this improved method is now used routinely in the National Health Laboratory Services diagnostic laboratory, so that a greater number of patients can receive a confirmed molecular diagnosis through DNA testing. Smith also researched using a new technology to turn patient skin cells into a type of stem cell, called induced pluripotent stem cells (iPSCs). These cells can be cultured in the laboratory, and turned into any cell type in the body.

"I used SCA7 patient iPSCs to grow photoreceptors (eye cells) which could be used in the laboratory to study the disease."

Smith, who hopes her research will contribute to a greater understanding and study of the SCAs in Southern Africa, said she was inspired to study genetics at high school.

"I find it fascinating that DNA, something that is invisible to the human eye, can control the development, functioning and health of the human body."