A time traveller's guide to the next ten years in SA

Dr Frans Cronje – CEO of the South African Institute of Race Relations (IRR) – paints a less-than-rosy picture of South Africa's mid-term socioeconomic and political future. At a seminar in February, he outlined three political scenarios for the country, and their possible outcomes.

Cronje presented his predictions – based on his 2014 book, A Time Traveller's Guide to our Next Ten Years – at a seminar organised by UCT's School of Economics. His presentation sparked a lively debate with the audience, which would've continued far longer if it weren't for time constraints.

"While developing countries will lead a lot of [global] growth, that growth is not going to be spread among them equally. It's all going to rest in east and south Asia, which are going to have growth rates upwards of six percent – that's the projection," said Cronje.

By comparison, South Africa is set to continue along its 2% yearly growth path – and citizens are not taking kindly to the poor economic conditions.

Between 1994 and 2001 South Africa employed about 12 000 riot police, comprising roughly one-tenth of the police corps. From 2002 through 2006 the number of riot police fell, and fell again between 2006 and 2010, but the government began employing more riot police officers since then.

"Why did it do that?" asked Cronje. "Because between 2009 and 2013, the number of violent anti-government protests doubled from 1 000 to 2 000 incidents. The hard political trend [of popular dissatisfaction] is un-missable."

There are now more people not voting – 40% of those eligible to vote – than there are people voting for the ANC, says Cronje.

"The biggest political bloc in the country has become the non-voter. If that non-voter decides to move that voting right out of the protest movement where it's in at the moment, if they change their loyalty, you see significant swings in political outcomes for South Africa.

"This isn't political apathy of a democracy that's becoming established; these young people are active participants in a protest movement." 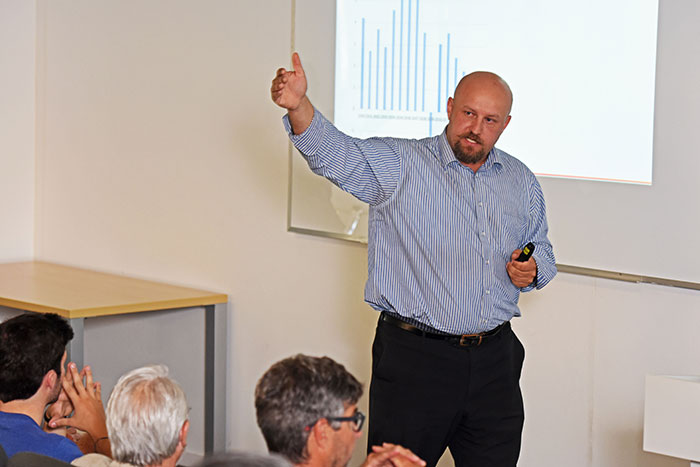 "Is the [South African government] forced into market-driven neoliberal economic reform in a desperate effort to survive, or does it reject that and insist that it can make it as the interventionist developmental state?"

While that decision is being made, added Cronje, the nation needs to decide if it is to remain "a free and open society", or whether South Africa's democracy itself would survive under the current dispensation.

How those two trends dovetail result in three possible scenarios:

"The worst case is that we insist on becoming the interventionist, developmental state that doesn't work. The economy doesn't function, the expectations that drive the protests are never met, the jobs are never created, and in a desperate attempt to cling to power we destroy democratic institutions, allowing the state to move with impunity and emerge into socialism amidst crumbling democratic institutions.

Alternatively, "desperate to survive and aware of where things are leading", the state wins a popular mandate to make market-driven reforms – and "we emerge as a relatively high-growth emerging market".

Then there's the most intriguing possibility, said Cronje: "You destroy key democratic institutions in order to force unpopular market-type reforms. This model is China and South Korea of the 1970s."

Although only in its barest bones is it the same thing, he cautioned.

The result? "A politburo with incredible power to create the environment for investment to thrive, for trade to thrive."

"We call it the narrow road," said Cronje. "We start growing quite quickly, we start meeting expectations, living standards are raised, definitely up from the democratic society that we used to be."

"We never meet the expectations of these increasingly rightfully angry young people, but for some reason we remain a free and open society. And can the [ruling party] ANC survive that?"

Which is most likely?

Last year Cronje and his colleagues advised their clients to assign equal probability to each scenario. But enough had since happened for them to start developing a firmer view.

If current trends don't change, Cronje suggested: "We will insist that we can be an interventionist development state, and it's going against all the evidence. In the face of the evidence, [we'll insist] that this is going to work. [There'll be] far stricter empowerment and labour policy to force businesses' compliance. Property rights [will be] under threat ... low growth and investment levels will maintain, government finances and debt levels [will be] under greater and greater strain."

Cronje lamented the "policy of dependency" that was driven by the logic that the state's role was to create a successful emerging economy by redistributing resources to the poor.

"South Africa's gone very far down that road," he argued.

There have been some successes in this regard, but ultimately South Africa had "run into trouble", said Cronje, pointing to a weak education system as an example of this.

What are the outcomes?

If this interventionist scenario came to pass, what might the outcome be?

For a start, economic growth's upper ceiling would be around 2% to 2.5%, the unemployment rate would remain constant at around 25% and the rand would continue to weaken. Inflation rates might "stay within the target zone because the domestic economy is really going nowhere" and interest rates would pick up, driven by interest rates picking up globally.

Cronje also predicted that the Democratic Alliance would win more than 30% of the vote by the 2024 general elections, while the ANC would slide into the mid to low fifties. There was the possibility of the ANC would win even less, but this could see the rise of a coalition government that would in effect not weaken the ANC's position in the state.