We are the champions!

Rugby fans were left with an overwhelming sense of 'sjoe' as UCT claimed the 2014 FNB Varsity Cup trophy in surreal circumstances.

The Ikey Tigers came back from eighteen points down to claim a 39-33 victory over NWU-Puk with a converted try in the dying seconds of the final at the Fanie du Toit Stadium in Potchefstroom on Monday night.

The spine-tingling action justified the pre-match fanfare many times over. Warren Brosnihan summed up the festive atmosphere after being caught "busting a move" to some pre-match tunes by his co-host: "I have a head like a sewing machine, but I'm no singer, or no dancer!"

UCT put the pedal to the metal from the first whistle and soon turned their territorial dominance into points.

The home side soon turned on their own afterburners, forcing UCT onto the back foot and winning three penalties into quick succession. But despite an early warning from the referee to keep their discipline, the Ikey defence held firm.

Pukke were eager to give the ball air, to the equal delight of home fans and Ikey defenders, who responded with some thunderous tackles.

But the pressure told in the 14th minute when Puk flanker Rhyk Welgemoed recovered from one of those monster hits to bulldoze his way over the try line to level the scores. Captain Tiaan Dorfling held his nerve with his conversion, giving NWU-Puk an 8-5 lead.

The deficit was stretched a few minutes later. Wing Luther Obi's pace was enough to round off another phase of powerful play by Pukke. Dorfling's acute attempt was wide, but the home side still took a 13-5 lead into the first strategy break.

Pukke kept up the heat after the pause, but better breakdown play from the visitors and a stunning clearance kick from Grant took the game all the way back into the NWU 22. With the momentum his side's way, scrumhalf Liam Slatem gave his backs quick ball to attack the try line, but sterling defence kept them at bay.

That passage at play did not end without casualties, though. Dorfling's game ended early when he had to be stretchered off after appearing to tear knee ligaments in his left leg while making a try-saving tackle.

Is this the greatest come-from-behind win ever? Decide for yourself.

Ikey rugby at its regal best

Richard Stewart was having none of it, though. The Ikey winger gratefully latched on to a pass from his fullback Ross Jones-Davies to score his side's second try. Jones-Davies's pass was the sixth in a lethal counter-attack that started some 70m out. This was Ikey rugby at its regal best.

The gap was narrowed to 13-10, and the wind was back in UCT's sails. Slatem lead his backline across the width of the pitch, and only ill-discipline tripped up the team as they edged towards scoring a third try.

The momentum was constantly shifting and Obi was a constant thorn in UCT's side with his speed and quick hands. But it was scrumhalf Dillon Smit that stunned Ikeys with a searing counter-attack that ended with him dotting down under the poles. But the 'try' was disallowed when the referee called play back for an earlier foul, sending Pukke centre Johan Deysel to the sin bin in the process, much to the home crowd's irritation.

UCT came within inches of making the extra man count only for flank Jason Klaasen to lose the ball over the line under a heavy tackle.

But the number that counts is the one on the scoreboard, and Puk hooker Armand van der Merwe added five more with a bullocking try, leaving a dazed Slatem in his wake.

The home side kept playing the numbers game, though, and moments after Deysel returned to the pitch, Pukke lost another man as tighthead prop Lucky Ngoama was shown yellow for a cynical foul.

Ikeys needed no second invitation to turn on the style and made steady yards with some slick handling and disciplined rucking.

And the powerful pack inflicted maximum damage. They drove over the try line from an attacking line-out, and Klaasen made no mistake this time as he grounded the ball. Grant, so reliable with his kicking throughout the tournament, missed his third attempt of the evening, leaving a five-point gap between the teams going into the final twenty minutes.

UCT also lost a man when wing Lihleli Xoli was shown a yellow. Van der Merwe nearly scored his second, only to be penalised for a double-movement in his efforts to squirm over the line. They wouldn't be denied for long, though.

Smit darted through a gap to add five before converting his own try, with the home team now leading by thirteen points.

Pukke looked to have wrapped up the trophy when lock Francois Robbertse scored his team's final try. UCT now needed to score thrice in just over ten minutes to get something out of the game.

The trophy seemed out of reach, but nobody told the Ikeys that.

It was a bruising encounter, and Ikey prop Joel Carew became the second player to be stretchered off after receiving a painful blow to the head. In a fantastic show of sportsmanship, the Pukke crowd rose to their feet to applaud Carew as he was carried off for treatment.

Ikey number 8 Michael Botha crashed over for UCT's fourth try, and Grant added a glimmer of hope by converting to bring his side within ten points with five minutes remaining.

An electric run from replacement Ikey back Martin Sauls sparked desperate defence from the home side, who just managed to usher an attack that had 'try' written all over it into touch mere metres from the promised line.

Stealing the Pukke lineout allowed Dean Grant to dance over the line before converting his own try.

Two points behind with one minute left to play.

When UCT knocked on in their 22 with seconds left, it looked all over. But the courageous Ikeys charged down what would have been the final Pukke kick of the game and set in motion a counter-attack that dazzled and silenced a stunned home crowd.

Breaking down the left wing, the ball fell to replacement hooker Chad Solomon, who forgot that he was not a backline player and flicked an offload to a flying Nathan Nel that the best centres in the business would have been proud of.

Nel sprinted under the posts to score the try that sent the Ikeys into raptures. The scenes could best be described with a whispered 'wow'.

UCT Ikey Tigers were the champions. Having pulled a victory out of the fire, Kevin Musikanth's side maintained its extraordinary record of being unbeaten away from home this season.

From finishing seventh last season, Musikanth has spurred his side to top-dog status in South African university rugby in just one season. Indeed, it was smiles all round powerhouse as Ikey lock Shaun McDonald was honoured as the top forward for this Varsity Cup season.

It's a victory that will go down in rugby folklore. 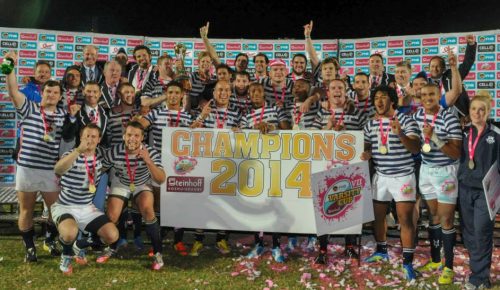 For more pics check out our 2014 Varsity Cup Final album.

Story by Yusuf Omar. Images by Michael Hammond and SASPA.