What primates teach us

We can learn a lot from studying primates; both about them, and about what makes us human (and primate). Primatologist Dr Jane Goodall's recent visit to UCT threw a spotlight on primate research in disciplines as diverse as anthropology, evolutionary biology, ecology, medicine, and psychology. A number of UCT researchers study primates, their research programmes ranging from the applied (eg conservation) to the theoretical (eg evolution). Helen Swingler asked six academics, some of whom collaborate on projects, to describe their studies

I am interested in understanding why primates (including humans) look the way they do; or more specifically, what underlying evolutionary processes are responsible for shaping primate diversity. I study both living and ancient skeletons to understand this relationship between evolutionary process and morphological variation.

Some of the questions that interest me include: Do patterns of morphological variation among living primates differ? Are these differences more likely to be the result of random evolutionary divergence (eg genetic drift) or adaptation (natural selection)? Can we differentiate between these processes when looking at fossil diversity? When during development does morphological divergence in variation patterning occur, and how can we use this to understand the developmental evolutionary divergence of primates? How does gene flow (hybridisation) between populations affect patterns of morphological diversity? Can we use our understanding of patterns of variation in living hybrids to detect hybridisation in the fossil record?

These are big questions that cross taxonomic boundaries, and my work has focused on myriad groups, including apes (chimpanzees, gorillas, bonobos), monkeys (baboons, tamarins, marmosets), humans and other mammals (wildebeest, mice), as well as Plio-Pleistocene (some five million years ago) members of our lineage, including australopiths, early members of the genus Homo, and most recently Neanderthals.

Although I have engaged in both palaeoanthropological and primatological fieldwork, the bulk of my research focuses on collections housed in museums and institutions in sub-Saharan Africa, Europe and North America. I am also using laboratory-bred mice as a model for understanding the effects of hybridisation on the skeleton, and am actively collaborating to explore the correlates between morphological and genomic divergence.

That the distribution and genetic structure of many species globally has been shaped by climatic fluctuations is well established. My research focuses on the role of these and other processes in shaping diversity within Southern African chacma baboon populations. Baboons evolved over the course of the Plio-Pleistocene, some five million years ago, and remain widely distributed throughout Africa. These animals have been on the subcontinent for at least two million years and provide us with an opportunity to study how climate and landscape change may have impacted on the evolutionary history of a terrestrial, sub-Saharan primate.

What has becoming increasingly evident is that even on a local scale, baboons are not homogenous but fascinatingly diverse: genetically, morphologically, ecologically and even behaviourally. My research is aimed at understanding the external forces that drive this diversity.

While my PhD research looked at large-scale genetic structure in chacma baboons, sampling from across Namibia, South Africa, Botswana, Zambia and Mozambique, my current research targets specific South African populations to gain a more highly resolved picture of the population dynamics and processes shaping diversity within this species. 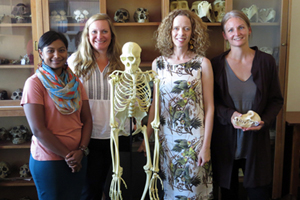 I am an honorary research associate at UCT, as my home base is the City University of New York (CUNY). My primary research interests involve the interacting biological and behavioural strategies of males and females in animal social systems, and the costs, benefits, and evolution of sociality.

My research focuses on baboons, and I'm currently running two field projects. The first is the Filoha Hamadryas Project, focusing on hamadryas baboons at the Filoha field site in Ethiopia. Hamadryas baboons are arguably the most male-dominated primate species, one in which males coerce females into harems. Such a social system lies at the far extreme of known variation in sex roles among primates, and I am trying to understand the evolutionary underpinnings of this unique system, especially the understudied role of female behaviour.

To complement this work and for comparative purposes, for several years I have been studying the behavioural ecology of the chacma baboons of the Cape Peninsula. Since 2006, I've been collaborating with South African and American colleagues and students as part of UCT's Baboon Research Unit to investigate the impact of social behaviour and local anthropogenic forces on stress, social behaviour, and reproduction of these baboons. Most of my work has focused on the baboons of the Tokai Forest, part of the Table Mountain National Park, where the baboons go about their daily lives amid the removal of the pine plantations and fluctuating baboon management practices.

My research team includes Shahrina Chowdhury, a CUNY PhD student who recently finished her behavioural fieldwork and endocrinology lab work focusing on stress and sociality in female baboons; Caley Johnson, a CUNY PhD student working on baboon nutritional ecology; and postdoctoral research fellow Steffen Foerster, who is currently following up on Chowdhury's research. Our current project, which involves collaborations with the University of KwaZulu-Natal and the Smithsonian Institution, aims to elucidate the proximate mechanisms underlying the previously demonstrated link between sociality and health in baboons.

Results from our research so far have shown that baboons are remarkably flexible in their behaviour. Not only do female baboons shift their patterns of social bonding in response to management-driven changes in troop composition (eg the euthanasia of raiding males), but they also adjust their diet on a daily basis to maintain a constant ratio of protein to carbohydrates amid fluctuating environmental conditions. Such flexibility in behaviour and ecology is reminiscent of ourselves and makes the baboon an exceptionally useful model for studying human behavioural evolution. This is true on a theoretical level but also on a personal one, as it is difficult to observe baboons for any length of time without remarking on their similarities to ourselves, and interpreting their behaviour as we would our own.

My research interests focus on how we can use our knowledge of genetic variation for the conservation and management of Southern Africa's wildlife.

One of the groups I study is baboons; large, smart primates who are found in all but the driest environments of Africa. Using data from the mitochondrial genome, we've been studying the evolutionary history of chacma baboons across Southern Africa for a number of years.

More recently we've focused our attention on the baboons of the Cape Peninsula, where we're interested in understanding historic patterns of dispersal and health in what today is effectively an island population.

Until relatively recently, the baboon troops of Cape Town were genetically connected via the dispersal of young males between troops, both within and outside the Peninsula. In the face of extensive urban development of the greater Cape Town metropole over the last 50 years, it's now impossible for a young dispersing male baboon to successfully traverse the landscape that once linked troops in the Overberg, the Boland, the Swartland, and the West Coast to those on the Cape Peninsula.

To inform the long-term management of an ecologically and evolutionarily healthy population, we've been using DNA-based methods to explore the historic connection routes of Cape Town's troops to those outside of the Peninsula, and determine the levels of adaptive immune genetic variation in troops on the Peninsula.

Our data reveals that troops in the Overberg and Boland regions are evolutionarily the most closely related to Cape Town's baboons, and that while the Peninsula supports very few maternal genetic lineages, this may be the result of limited historical dispersal into the area.

Despite this, troops on the Peninsula do support equivocal levels of immune genetic variation to troops in the Overberg, reflecting the shared pathogen history of these once-connected populations.

This is good news for an isolated population living in such close proximity to humans, where ongoing contact and competition for habitat is likely to increase in coming years.

Data of this type can be used to directly inform interventional management options like translocation and supplementation; these are important options to ensure the persistence of a healthy population within the confines of the Cape Peninsula.

What has your research taught you about yourself and what it is to be human?

Assoc Prof Becky Ackermann:
"Studying primates gives us insight into what it means to be human, largely because it tells us how much of what we consider special in ourselves (things like intelligence, toolmaking, self-awareness) is actually shared with our primate relatives. This gives us a baseline for understanding those few things that really do make humans unique."

Dr Jacqueline Bishop:
"When observing primates I am always reminded of how important individual personalities are in both the success and the breakdown of social groups. We can recognise the despot, the Romeo, the sulky adolescent; and research supports that these similarities between humans and primates are not anthropomorphic extensions; rather, they are best explained by our shared ancestry."

Dr Riashna Sithaldeen:
"Many students learn about the concepts of evolution in the classroom and accept a primate ancestry for humans from an intellectual perspective, because the facts add up. This is how it was for me. When I started working with baboons as a graduate student, that was when I really saw that the connection was undeniable."

Prof Larissa Swedell:
"Baboons enjoy being groomed, and baboons that spend more time grooming actually end up living longer and producing more surviving offspring. One of the things I as a researcher enjoy most about baboons is watching them groom one another. Not only does grooming reduce the baboons' heart rates and stress levels, but it actually reduces mine as well. This comes in handy given the high stress of academia!"