Foundation proud of its "subversive" link with university

Vice-Chancellor Dr Max Price recently hosted the Ford Foundation's Board of Trustees and senior leadership as part of their trip to South Africa to mark the twentieth anniversary of Ford opening their Office for Southern Africa.

In welcoming them, Price acknowledged the foundation for the critical role it played in South Africa's transition to democracy.

The Ford Foundation's involvement with UCT stretches back to 1978 when it made funds available for the university to bring together a group of human rights leaders. "It was for something quite subversive, which we liked," observed Darren Walker, President of the Ford Foundation. "Imagine the courage it took for this university - in the middle of the horrors of Apartheid - to convene a group of international human rights defenders to carry the message of what was happening in this country at the time, out to the world," he added.

To date, the total donations from the foundation to UCT amount to over R80 million.

Ford Foundation's goal in Southern Africa is "to reduce socioeconomic inequalities and HIV/AIDS vulnerabilities by working with civil society and the public sector on a variety of fronts to integrate good governance, educational opportunities and asset mobilisation." 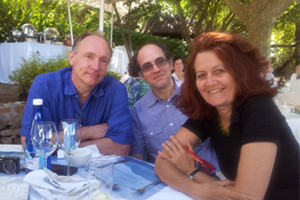 Meeting of minds: Guests at the Ford Foundation lunch included (from left) Sir Tim Berners-Lee, the inventor of the World Wide Web, Tony Carr, Educational Technologist in the Centre for Innovation in Learning and Teaching and Assoc Prof Laura Czerniewicz, head of the OpenUCT Initiative.