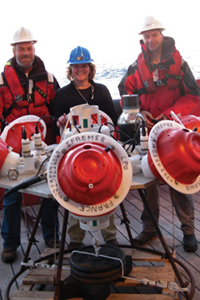 Deep-sea data collection instruments are playing a vital role in telling oceanographers how increased ice cap melt is affecting the nature and flow of water between the North and South Atlantic Oceans.

UCT's Dr Isabelle Ansorge (oceanography department and the Marine Research Institute) is part of an international scientific team involved in beefing up data collection in the South Atlantic.

Ansorge and a group of UCT oceanography students recently returned from an expedition aboard the new South African polar vessel, SA Agulhas II, to deploy additional observational monitoring instruments in the region.

These deployments will monitor the Meridional Overturning Circulation (MOC), a system of surface and deep ocean currents that extend across the globe. It's the main pathway for the large-scale circulation of heat, salt and carbon dioxide from the tropics polewards.

"One impact of continued global warming is the threat of increased melting of Greenland's ice cap, which may result in an influx of cold and fresh surface waters into the North Atlantic Ocean," said Ansorge.

Already, the North Atlantic ice melt is precipitating changes to the ocean, reflected in factors like temperature and salinity. And scientists predict that the injection of fresh water into the sea as a result may soon be enough to change the composition and flow of the world's oceans on lengthy time scales, ranging from decades to centuries.

Climate models have predicted that increased levels of greenhouse gases may also be interfering with this process by slowing down the circulation in the North Atlantic – the northern limb of the MOC.

"Although individual efforts to measure the circulation south of Africa exist, none of these efforts have previously been co-ordinated; nor have these systems been designed for long-term monitoring," said Ansorge.

She is the principal investigator of South Atlantic Meridional Overturning Circulation SA (SAMOC-SA), an initiative she leads with Dr Mike Roberts of the Department of Environmental Affairs Oceans and Coasts, and Professor Sabrina Speich of the University of Brest in France. "There's growing recognition of the intimate link between the North and South Atlantic basins and the critical need to study the full ocean water column on a more regular and long-term basis."

Until the September expedition, there was only one system in the North Atlantic that monitored the Meridional Overturning Circulation. "Because the Meridional Overturning Circulation extends throughout the world's oceans, it is obvious that changes happening between the South and North Atlantic sectors must be considered in tandem," Ansorge explained.

The latest deployment of a Current Pressure Inverted Echo-Sounder (CPIES) into the South Atlantic completes a network of eight bottom-moored instruments that record vertical acoustic travel time and near-bottom pressure and velocity.

From this data scientists can infer temperature, salinity and north-south velocity throughout the water column. Another six moorings are planned for deployment along the eastern flank of the array in early December 2013.

"This line complements the western array, extending from the South American continental shelf, where another seven CPIES were deployed by United States, Brazilian and Argentine scientists in December 2012," Ansorge added.

"These new enhancements have not only brought the mooring array across the entire south Atlantic closer to completion, but have also provided high-quality observations of the ocean currents; and in particular, their northward transport of salt."

"In 2015, if all goes well, a repeat oceanographic survey is planned on board the SA Agulhas II, and annual or semi-annual surveys are planned off Argentina," said Ansorge.