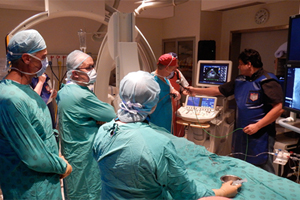 Heads together: Prof Justiaan Swanevelder (in red cap) explains to the remote audience what he can see on his live TransOesophageal Echocardiography 3D images. Also in picture are Drs Oliver Stumper, John Lawrenson and Lindy Mitchell.

It was like negotiating peak hour traffic with a host of backseat drivers, someone quipped outside the cardiac catheterisation laboratory at the Red Cross Children's War Memorial Hospital.

Inside, a complex heart stenting procedure was being demonstrated and relayed to a lecture theatre full of paediatric cardiologists and registrars who were able to participate in the procedure, shown on a large screen, by asking questions and sharing observations.

Interventional cardiac catheterisation involves procedures to correct defects in the heart, without surgery. Access is gained via small punctures in veins and arteries and thin tubes, wires and various small devices are used to close holes, widen narrowed arteries, disrupt fused valves, and so on.

"It's like preparing dinner in your kitchen through the postbox slot in your front door," said paediatric cardiologist Dr Rik De Decker, who arranged the workshop.

Working as part of a large cardiac interventional team and under pressure is something paediatric cardiologists are accustomed to. But the recent interactive procedures at the Red Cross Hospital marked a first.

The Division of Critical Care and Children's Heart Disease in the School of Child and Adolescent Health hosted Dr Oliver Stumper, renowned cardiac interventionalist from Birmingham Children's Hospital in the UK.

Stumper is an expert with a special interest in stenting procedures and is well known for his work with balloon expandable stents, which have become an integral part of the catheter treatment of congenital heart disease in children.

To make the most of Stumper's visit, the division and the Paediatric Cardiac Society of South Africa co-hosted a four-day workshop for private and state paediatric cardiologists across the country and brought them together at the Red Cross Hospital Cardiology Department.

"Our intention was for the workshop to be instructive, relaxed and fun," said De Decker.

The patient case list was diverse, ranging from simple to complex procedures: the full gamut to ensure demonstration of a wide variety of "techniques and tools of the trade".

A further highlight was the live lecture-demonstration of transoesophageal echocardiography by Professor Justiaan Swanevelder, the head of anaesthesia at UCT, and what De decker describes as a "virtuoso performance".

Live cases were complemented by short case presentations and talks from attendees during non-transmissions times.

It was another telemedicine milestone for the faculty, a highly technical undertaking, said the Faculty of Health Sciences' ICTS manager, Jerome Corns.