So long and farewell to SRC 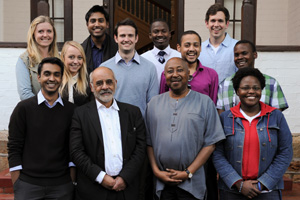 Nhlapo was speaking at the recent farewell to the 2012/13 SRC at a function hosted with his wife, Mathokoza, at their Linkoping residence. Guests included Deputy Vice-Chancellor, Professor Crain Soudien, and members of the Department of Student Affairs.

Traditionally, the budding of upper campus's renowned creeper vines has been a harbinger of spring and the year-end exams. But it also signals the end of cycles. At this time of year, the incumbent student representatives make way for the new SRC.

Nhlapo listed several SRC highlights such as the candlelight vigil to highlight violence and gender-based crime; their contribution to UCT's protest march against gender violence; a panel discussion on sexuality; and the '˜kNOw it's NOT OKAY' awareness campaign, which created awareness about sexual violence.

Nhlapo said the group had taken on a range of challenging tasks and had achieved a great deal.

Soudien agreed, saying that the university had seen a new benchmark set this year.

"The standards are high and that's how it should be. It's important that we have a student leadership worthy of where the university wishes to go."

Outgoing president Lorne Hallendorff paid tribute to his committee members and said that despite several heated debates on various concerns, the team had pulled together and each member had brought a different element to the dynamic.

He left the new student committee with a simple message: "Build on the name of the SRC."