University a mixed bag for the deaf 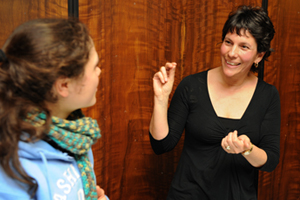 The best way for hearing people to accommodate the deaf is by learning Sign Language. So says June Bothma, who for the past two years has taught South African Sign Language (SASL) to third-year speech therapy and audiology students at UCT. Bothma is a clothing pattern maker by trade, but always harboured dreams of teaching.

"I always wanted to be a teacher. During the 80s deaf people were not allowed to be teachers. I was very disappointed. There were other choices open to me, but these were not deaf-friendly because there were no great opportunities for the deaf back then," she says.

Her UCT colleagues and students communicate with her via email or text messages. In class she uses PowerPoint presentations. She also mouths the words she is signing for her students' benefit. "Many students struggle to follow me on the first day, but they eventually 'tune' in to my voice."

She started teaching SASL at Christ Church in Kenilworth in 1992. She had been looking for a deaf-friendly church, and was stopped after the service by the minister who asked why Bothma's friend, who during the service was interpreting for her, had her "hands moving in the air". They explained; to which he replied that they must show him and the congregation how the church could better accommodate deaf people.

"This is when my real passion came out, and I have been teaching (SASL) ever since. Some of my work friends who have seen me teach say I am a different person to when I'm at work. I know it, because it is my passion to teach and help people communicate with deaf people."

Bothma's daughter, Jessica, is also deaf, and will be attending UCT next year. She says that so far she has been impressed with the support they have received from UCT's Disability Service. At Jessica's interview they arranged for an interpreter to be present.

According to Reinette Popplestone, director of UCT Disability Service, the university employs a sign language interpreter on a full-time basis. This interpreter accompanies the two deaf students currently studying here to their lectures and tutorials. Twenty lecture venues have facilities that transmit a lecturer's voice directly to the hearing aids of those using them. These facilities will become standard, with all lecture venues being upgraded as part of the classroom facilities refurbishment project.

David Silva, a deaf fourth-year student in the humanities faculty, finds that the support offered by the Disability Service has improved greatly since his first year. The Sign Language interpreter has been available to him since last year.

"Initially Disability Service gave me note-takers from other faculties instead of people from my own class. We sorted it out, because a person in the course doing his notes and mine would be the best."

For him, the most challenging aspect of student life is making friends.

"People are quite fickle. Many times I will struggle to get used to someone's lips (everyone's lips move in different ways, so you have to get used to how they say each word) and that will irritate them, because often I ask them to repeat themselves - as opposed to just standing there and having a small fake smile that says 'I have no idea what you're saying'."